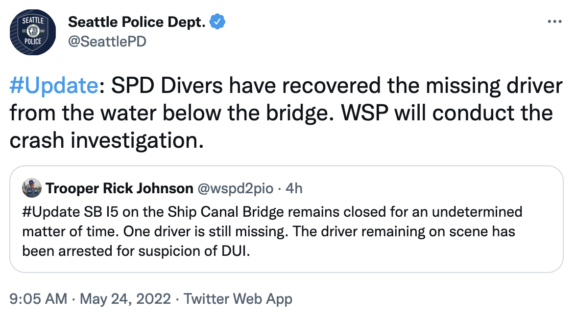 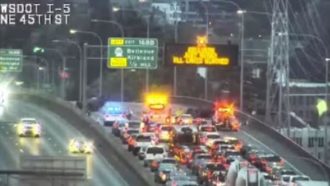 Biking to preschool this morning, as my daughter and I biked across the University Bridge like we do every morning, we saw some Seattle Police boats fishing in the calm waters of Lake Union below us. But they weren’t searching for fish, they were searching for a human being, the victim of a horrific act of violence hundreds of feet above the water.

The exact details are not all clear yet, but several people reported via Twitter that they saw a stalled vehicle on the bridge on the I-5 Ship Canal Bridge before two cars collided. The impact was so powerful that the vehicles rolled over. One person was arrested on suspicion of driving under the influence. But the occupant of the other car was missing. The Harbor Patrol found their body hours later. The impact had apparently thrown them over the side of the towering freeway bridge and down hundreds of feet to the lake below.

Our deepest condolences go to this person’s friends and family.

I didn’t tell my daughter what the boats were doing in the water this morning, but I knew because I had seen the news reports before we left the home. My feed was full of news about the traffic backup. I-5 was closed southbound, and the traffic backup was going to be big. Here this person experienced unimaginable violence, and the news was mostly about a traffic jam. How can our society be so callous about human tragedy?

This morning’s fatality was exceptionally dramatic, but it is otherwise horribly common. 538 people died in Washington State traffic collisions in 2019. Of those, 327 were drivers or passengers in cars. Why do people who drive accept the level of danger they face every day traveling our highways and city streets? Where is the grassroots organization of car drivers demanding safer roadways? These deaths are preventable. This doesn’t happen everywhere, and there are known solutions that make roadways safer. Why is there no organization of drivers demanding that our public agencies implement solutions that could save lives? 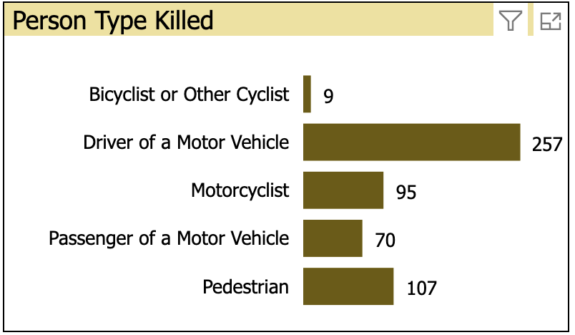 Instead, we get the opposite. When community members try to get our city or state to make safety improvements, they face resistance every single step of the way from an unspoken but dominant force fighting to keep streets dangerous as though dangerous streets are in the best interest of people in cars. The assumption is that people in cars want to sacrifice human lives to save a little travel time. I ask you, car drivers, is this how you feel? If not, then you need to speak up.

Here’s just one example. When the city’s Vision Zero team redesigned a section of Rainier Ave S in 2015, they successfully reduced the most dangerous types of car collisions (head-on and t-bone collisions). This wasn’t magic or good luck, it was the team’s goal. They used well-known traffic safety strategies to achieve this safety improvement. The street averaged nine serious injuries and one death per year before the changes were put in place. In the year after the changes, there were zero serious injuries or deaths. Zero. 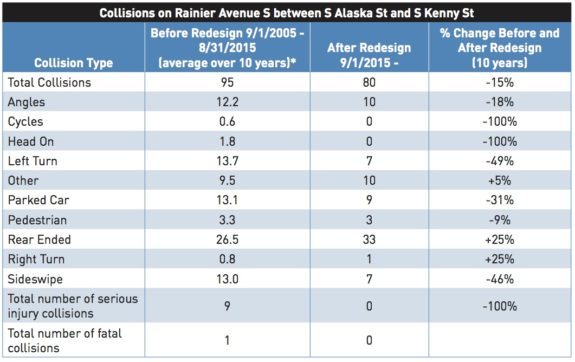 From an SDOT before and after study.

And yet the city is currently planning a redesign of the section of Rainier just north of this 2015 project, and they are not including similar safety designs there. This is unacceptable, and people working for safer streets for biking and walking are pushing back. But the city is fighting against safety advocates on behalf of what they assume people driving want: Shorter car travel times at the cost of human life.

Vision Zero is a paradigm shift that challenges people to snap out of the mindset that traffic deaths and injuries are acceptable and inevitable. Instead, it tasks the designers of our transportation system (and the politicians who develop their budgets) to take action and make changes so that the system is safe for people to use. Seattle claims to have a Vision Zero plan and policies in place, but SDOT’s actions demonstrate that we do not.

Our city is lucky to have a lot of people who dedicate their energy to making streets safer for walking and biking. Cascade Bicycle Club, Seattle Neighborhood Greenways, and many smaller neighborhood-level groups do a lot of work to try to improve our streets. Yes, safer streets are easier to cross on foot and bike lanes make it easier to bike. But safer streets are also safer for driving cars. They might be a little slower (though not always), but we are paying far too high a cost to gain a few miles per hour.

Team Love to Ride Took on a Challenge

The Power Of Genomics To Tackle The Obesity Crisis

Choosing the best gifts for bloggers and vloggers gift ideas

Testosterone And Penis Size – Do Steroids Make Your Penis Smaller?