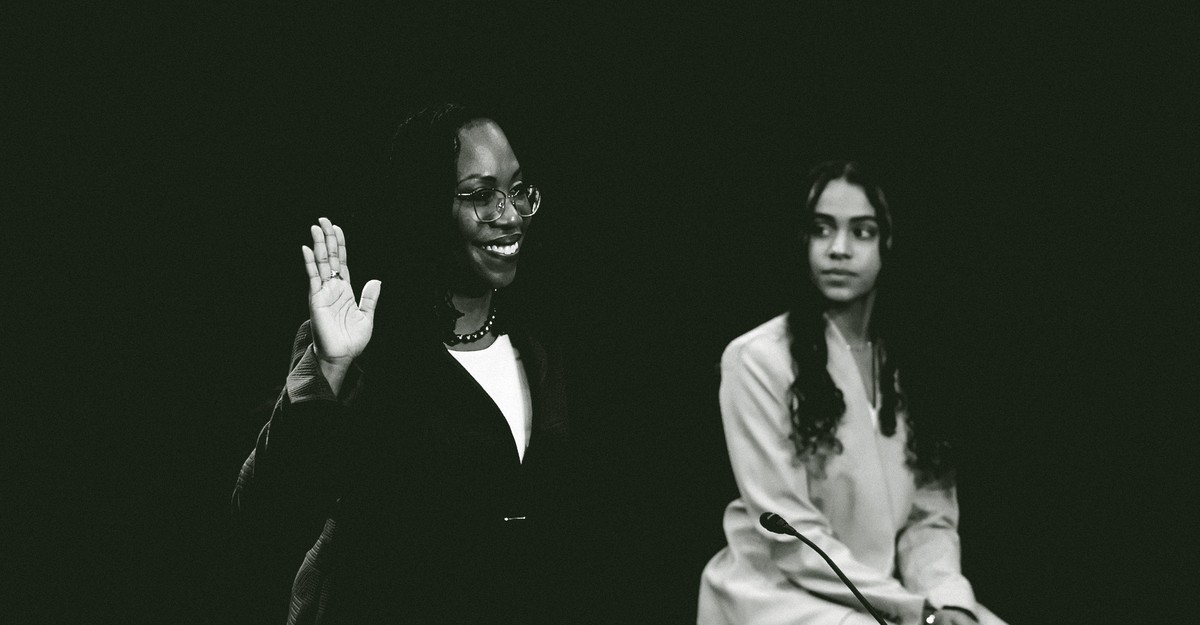 Amid the partisan grandstanding and enumeration of credentials in Ketanji Brown Jackson’s Supreme Court confirmation hearings, a few lines about parenthood pierced me the most. Addressing her two daughters, seated in the audience, Jackson said: “Girls, I know it has not been easy as I have tried to navigate the challenges of juggling my career and motherhood. And I fully admit that I did not always get the balance right. But I hope that you have seen that with hard work, determination, and love, it can be done … I love you so much.” As a daughter of a working mother and a working mother myself, I know something like the struggle that Jackson was talking about. I felt a lump in my throat.

Sometimes late at night in the ’90s, when I was in high school, my mom—the writer Erica Jong—would come into my bedroom. She would have returned from an evening out, smelling of white wine and glittering with the high of literary-cocktail-party conversation. My mother was glamorous well into her 50s—and unreachable the way famous people appear to be, at least for me. She would sit on the end of my bed, slip off her impossibly high heels, and stare at me with this sad, dopey, slightly drunk look in her eyes. She would say things like: “I did the best I could, you know,” “I never felt I had enough time for my work,” or “I was always worried I wouldn’t be able to write another book.” Sometimes I thought she was about to cry, but I couldn’t really tell.

For a long time, I didn’t really understand those weird post-party conversations; I didn’t grasp what she was apologizing for. Mostly, I ignored her, as teenage daughters often do. But now I know the guilt she was trying to assuage. And when Jackson repeated a similar sentiment in the halls of the Senate, I realized that while America has changed since my mother’s era, our collective maternal guilt hasn’t necessarily lifted. If confirmed, the Harvard-educated, eminently accomplished Jackson will have earned her place in history as the first Black woman on the Supreme Court. Yet she—like so many of us—still appears to be grappling with how to have it all.

In 1978, the year I was born, 53 percent of mothers were in the labor force, compared with 71 percent in 2020. My mother had written Fear of Flying, a feminist novel that sold 20 million copies. I had a bib that said Women’s Liberation. My parents had added each other’s last names to their own and said they would live a halcyon dream of gender equality. They divorced three years later.

Most working mothers don’t have the kind of privilege that my mother and I have. She was an affluent white feminist who has been rightly criticized, along with her contemporaries, for her inability to look outside her affluent white world. And yet, again and again, her life as a working mother still involved difficult choices. She could go on a promotional tour for a month or pick up her children from school. She could write a book every two years or make friends with the other mothers and take me to playdates. As a child, I spent many an hour sitting in a greenroom, eating day-old fruit and watching my mother on a dusty monitor as she told the studio audience of an afternoon talk show that they could have both a fulfilling career and family life. “Having it all” was one of the mantras of second-wave feminism. But my mother didn’t have it all, and neither do I. We had so much, but I’m not sure we had enough.

Today, the idea that a mother can work is taken for granted. Yet that awful feeling of not having done enough for my own kids—something between shame and embarrassment—has not lifted. I can still recall the times I disappointed my children by not attending a play or a soccer match. I still feel uncomfortable when I think about how I forgot to pack a lunch and my kid had to eat half their friend’s sandwich or get crackers from the teacher.

I’ve been sober for 24 years, but sometimes late at night, I also want to go into my kids’ rooms and apologize to them for not being the mother I wish I was. My children are the age I was when I remember my mother apologizing to me. I wouldn’t ask them to assuage my guilt, but I understand the temptation to. So many mothers do.

My own mom has memory problems these days, and some pieces of the world are getting lost, slipping through the cracks in her memory. But when we talk on the phone, she’ll still apologize to me. She may not remember my childhood dog Poochini, but she still wants me to know that she tried her best. Even as names escape her, the guilt never will.

10 Benefits Of Stacking Supplements With SARMs For Women

Blocking the Cancer Metastasis Enzyme MMP-9 with Beans and Chickpeas