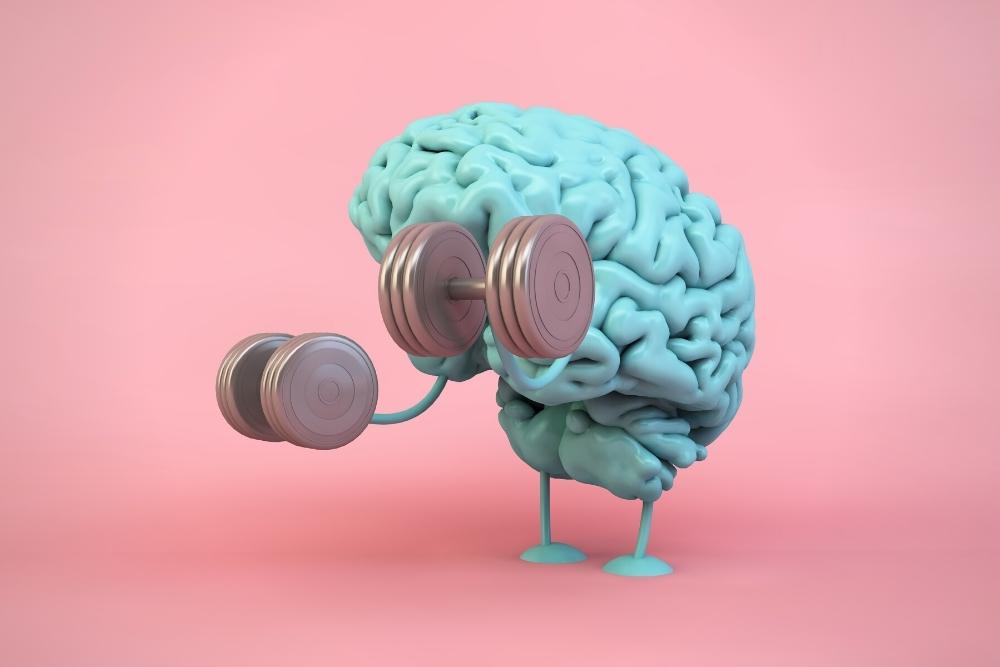 In our modern food environment, most of us are blessed to have ready access to a variety of foods. But what’s tricky is that we are also exposed to a lot of visual food cues, including:

This kind of environment makes it more challenging to simply eat when we notice we’re hungry. Instead, we may want to eat just because we lay eyes on a food that looks tasty. Over time, visual food cues might lead us to eat when we’re not hungry more than we would if those cues weren’t present. (Note: this is less likely to happen for people who never had their inner intuitive eater knocked out of them, or who have reclaimed and practiced intuitive eating skills). We’re eating because we are seeking a reward, and that reward isn’t (or isn’t only) the satisfying of hunger.

Why does this happen? Let’s investigate.

Evolution and your brain

Some behaviors that don’t make practical sense today (and might even cause us distress) made a lot of sense to our long-ago ancestors. If you were an early hunter-gatherer, remembering how to access good sources of food (which watering hole the wooly mammoths prefer, where to find the berries that aren’t poisonous…and when they’re in season) would help make it possible for you to survive so you could take part in perpetuating the species.

Remembering this important food information requires either positive or negative reinforcement (or both).

Both types of reinforcement increase the odds that you will take that action again in the future, because when our brains make the connection between an action (or behavior) and a reward, it creates a powerful emotional memory.

Said another way, if you eat a delicious food, and it makes you feel good (positive reinforcement), you embed a memory that helps you later recall where you got the food, what you liked about it, the circumstance in which we ate it, etc.

Similarly, if you are stressed or sad or anxious, and you eat something that helps you feel less bad (negative reinforcement), you might embed a memory that eating certain foods reduces certain uncomfortable emotions.

I see the effects of this “brain training” for food rewards play out in different ways, most notably “food addiction” and dieting.

The “rewards” of dieting

Let’s say you are counting calories, carbs or fat grams—or otherwise “watching what you eat” or “controlling portion sizes”—and you do lose weight (as most people do for the short term). If you get compliments about your shrinking body, that serves as positive reinforcement to keep doing what you’re doing. That can help compensate for the soul-sucking nature of eating “good” foods that you don’t really like and giving up “bad” foods that you love.

(There is another side to this coin, however. I’ve had clients who were in a phase of their life where they were more active than usual and eating “normally,” and lost some weight as a side effect. Then the compliments started coming, which made them uncomfortable—not everybody wants their body to be commented on, even in a “positive” way—which triggered them to start binge eating and/or being less active so they could stay indoors and hide their body. When they gained weight and the body complements stopped, this served as a negative reinforcement to stay on this path.)

Let’s not forget that restrained eating (food restriction) often leads to rebound eating. This rebound eating may feel like emotional eating, “out-of-control” eating, or binging. In some cases, it may actually meet the clinical definition of a binge, and of binge eating disorder (BED).

The perpetuation of this rebound eating in response to actual or even perceived restriction (scarcity), is driven by food tasting so much more rewarding after we’ve been deprived of it. On that note…

It’s this reinforcement, and these emotional memories, that keep neglected children locked in an emotional eating cycle decades later even if they now have a loving partner, good friends and a fulfilling life. It’s what makes a medical or mental health professional (who you might think would “know better”) realize that they have no coping tools other than food because food always worked so well for them that they never bothered to diversify their coping toolbox.

There is some evidence that so-called “highly palatable” foods (processed foods high in added sugar, salt and fat) can have an even more rewarding effect. It can get to the point where we so strongly anticipate that reward when we eat those foods that it’s very hard to resist visual cues associated with those foods. For example, a picture of someone eating ice cream, a pizza ad on TV, donuts (even stale donuts) in the break room.

So is this food addiction, or is it brain training?

Regardless of what you call it, eating that feels emotional or out of control in some way might feel good in the moment, but then not so good later.

Which of these tools is best for retraining your brain regarding food rewards?

Oh, I hope you said B! Willpower is real, but it’s not an infinite resource, and we use it up as we make decisions and deal with stressors throughout the day. (When you want to say something snarky to a co-worker or honk at a rude driver, and you don’t, you just used up some willpower.) And I’m not even going to comment on the idea of a lobotomy.

Using mindfulness in this context involves:

While having a general mindfulness meditation practice can help with this, a short, informal, in-the-moment practice, such as this version of the RAIN meditation, may be more helpful:

If you would like to learn more about RAIN, Tara Brach discusses it nicely on her website.

It’s easy to get stuck in habitual behavior patterns that we didn’t consciously choose and may also be repeating endlessly without making a conscious choice to do so. These patterns aren’t limited to food…we may find ourselves repeating certain patterns in our relationships, our shopping habits, and other aspects of life.

When we can shine a self-compassionate light on what we’re doing and why we’re doing it, it opens the door to making a conscious choice, whether that choice is in alignment with our established habit, or something totally different. The fact that we now have a choice (no more autopilot) is a win.

Gotta See It: Bastian bats puck out of mid-air to beat LaFontaine

Beating the Heat on a Group Ride – BionicOldGuy