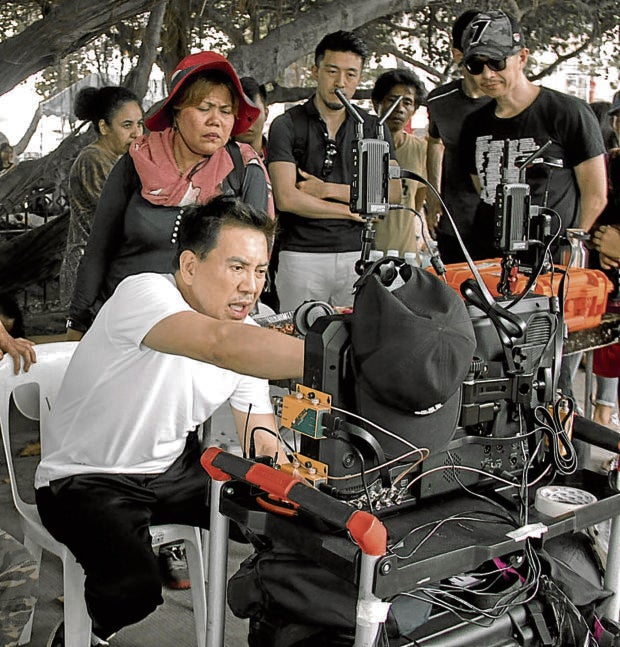 The author on the set of one of his latest movies

We wish to go back to the cinema, but because of the current crisis and the fact that things will inevitably change, it is understandable that the audience will be drawn toward newer, more convenient options.

Most films these days will end up on streaming platforms. Films are being acquired, bought and created by companies such as Netflix, HBO, Disney and others. So far, the Philippines does not have locally owned giant streaming services that seriously cater to the global market.

We have streaming apps like Vivamax, which is the most active locally, releasing two films per week. It has more local subscribers than Netflix, whose fee is deemed too expensive. As to local networks, some have been pushed to lessen film production, while others partner with other streaming platforms or focus more on acquisition and free TV.

When these streaming companies provide funding for a film, they’re a great help to artists and film workers. Some say that the budget provided by platforms like Vivamax are more limited compared to films that are foreign-funded and those that are meant for theatrical release, but it cannot be denied that it helps keep things moving and gives people jobs, especially during the pandemic.

While it is good to challenge ourselves as we work on our own, we must also be prepared to compete with those that are bigger and more established, for in any industry, when there’s no serious competition, there is also little control when it comes to the output. We need strong streaming platforms with high-quality films that can compete globally. After all, how do we capture the world market if we do not offer superior content?

We must also ponder if perhaps when we become too engrossed with quantity, improving quality no longer becomes a priority. If so, what will happen then to our aim as an industry—to please viewers by offering films with better quality?

The arena may be changing, but the battle is still the same. It’s necessary to adapt, as it is necessary to bear in mind that though the current period has brought about difficulties that limit us, our path should always be toward growth.

Certainly, providing a bigger budget for production and longer postproduction days will improve a film. And as it is, the budget for films is getting smaller. Time is another consideration because the creation process cannot always be rushed.

Sadly, creative growth is often neglected in the haste to produce. And when artists are limited both by work/health restrictions and funding, how can we creatively grow? Whether a project is for streaming or for the theaters, it’s important to explore, advance and be able to go all the way, otherwise we’ll stagnate and be left in the dust by our neighbors.

Meanwhile, foreign streaming services are always looking for films that attract the global audience. I’ve been talking to some of them. They really want to acquire and make films in Southeast Asia, but the budget they’re offering is low, because they’ve noticed that the quality of content produced in the Philippines, for example, isn’t exactly high.

Not because of luck

We create mostly for Filipino consumption. We don’t target foreign viewers because creating high-quality films require a big budget. Often, it’s just Filipinos watching Filipino films, and sometimes, we just wait for them to be shown on TV for free or find them on free online sites.

On one side, many will pay to stream low-budget drama, comedy or sexy films that aren’t deep or unique plot-wise. On the other side, there’s also a clamor from some that Filipino artists must create something that can compete production-wise with big-budget foreign films, but there’s either a lot of piracy and little support for those who are capable of making such films.

Succeeding in the streaming competition takes time and requires constant effort, but we can only reap what we sow. Films do not become big because of luck. Competitive streaming platforms do not just come into existence out of mediocre work. It’s important to show the global audience that our film industry is serious and safe enough to bet on. But this is almost impossible to do if we will not invest in our own, not just financially, but also creatively.

Sometimes, people expect so much from artists. You are expected to be consistent, but times have changed. Circumstances are more difficult now, and still, there’s inadequate support from the government or the private sector.

Our nation has been through wars and adversities. In the current crisis, there are no bullets, but anyone can be a victim. We want to work, but sometimes production must halt because our priority is to protect the people around us—and we cannot function on our own.

Problems arise and the limitations can be discouraging at times. Still, I remind my staff that we create to express ourselves. And though there are restrictions, we should never think of any project as a gig, or something done out of desperation.

When they say that we’re returning to the “pito-pito” approach—where you’re expected to finish a shoot in seven days—for streaming release, it isn’t really such a terrible thing. What matters is that we allow ourselves to continue creating things that have value. It also brings you more opportunities to improve and do more in the future.

Going back to the theaters will probably never be the same again. There will be more challenges in the future, and streaming is simply another development we must adjust to. In this industry, especially for small filmmakers, it is wise to be realistic and accept the situation as it is.

But despite hindrances, we also must grow. That’s easy to say and hard to do, but let us not be crushed by difficulties. Whatever our occupation may be, we must cling to hope and resist deteriorating. We must be steadfast in our mission to reach a better place.

How to Invest in Middle Mile Networks to Bridge the Digital...