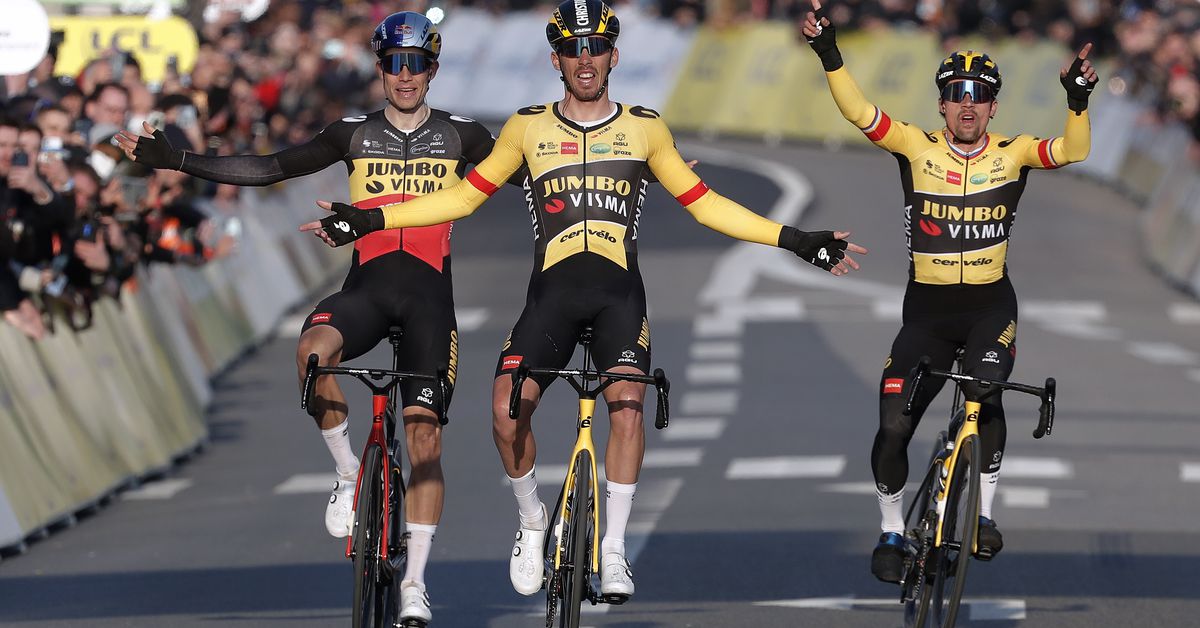 Sometimes it is important not to overreact to dramatic statements of cycling excellence, and to try to keep perspective on how in the bigger picture it’s just one or a few points of data. And if you are coming to this website for that sort of sentiment, you must be new around here. Because the time to overreact is RIGHT NOW…

This was the scene at Wednesday’s Trofeo Laigueglia, where Team UAE played all of their cards right and swept the podium — Polanc, Covi and Ayuso — despite hauling Lorenzo Rota and Carlos Rodriguez into the final KM. It wasn’t an all-time statement of dominance, but you would hardly know that from the scoresheet, and anyway this is the UAE B team.

This came four days after Wout Van Aert of Jumbo Visma rode home solo in the Omloop Het Nieuwsblad, its own statement of early dominance by a rider who doesn’t have any rivals in the classics at the moment. That isn’t exactly good news for cycling, but you can’t help but give Wout his due after however many years of Mathieu van der Poel sticking to him like a tattoo you got in your early 20s about someone you stopped dating right afterwards. Enjoy your psychological holiday Wout. No telling right now how long it will last, and it’s not like we didn’t already notice how you were putting together an all-time great career, but a little extra daylight shining on your work is a good thing.

Van Aert was on plenty of people’s minds Saturday, when the Strade Bianche rolled out of Siena without him. Thanks to some late withdrawals, it was sort of a thin field at the race, consisting of favorites like not-totally-fit Julian Alaphilippe and ageless Alejandro Valverde. Minus the Wout-Mathieu battle, Tom Pidcock might have slid in and done something exciting, but the Cross World Champ was sidelined by a stomach virus.

That left most eyes on reigning Tour de France champion Tadej Pogačar, trying to become the first grand tour winner to take this classics-guy classic, which … I mean… [turning on all caps] HE ATTACKED WITH OVER 49KM REMAINING AND SOLOED HOME FOR THE WIN. Gone were the questions of whether he could hang with the puncheurs on the 18% burst up to the Campo in Siena. Gone was discussion of the other elite classics dudes, who only occasionally made themselves known in the chasing group, particularly Kasper Asgreen, who stuck his nose into the wind for a while in search of second, only to have Valverde snatch that away in his Valverdean (re: unlikeable) style. Gone was any doubt about who the best rider was on the day, probably the year, probably the decade.

That was a lot of UAE, too much for some people, like the good folks back at Jumbo-Visma, who undoubtedly scoffed at the ease with which Pogačar strolled away from a Wout-less field. We would never have let that happen, they mutter. And to show how serious they were, Jumbo… attack on the final, decisive climb of stage 1 of Paris-Nice to win in a three-man breakaway reminiscent of the (not so) good old days of Mapei. Jumbo and their leader, Primož Roglič, came to Paris-Nice to send a message: that if Pogačar is off racing in another country, they will NOT BE STOPPED.

It’s still very early in the cycling season, and you could argue that these are just some odd results, but I’m not going to do that. I am going to focus on asking, what does this mean? And, like the double rainbow, the answer is, quite a lot. Does it mean that Pogačar is going to rip the legs off cycling this year? Maybe, but we already expected that. Does it mean that Jumbo are all in for Primo, including winding up Van Aert to play the role of Best Lieutenant Ever? Again, nothing new.

Is this true? For the time being, sure. UAE lead the world in points and victories. Pogs and the squad lead the World Tour individual and team standings. In 2021, Quick Step and INEOS held their grip firmly on the World Tour, bothered only slightly by Jumbo hopping up into second in wins. Since the demise of HTC/Telekom, the Steppers have only surrendered the points lead three times, each instance to Sky/INEOS. Wins have been more mixed, but it’s almost always Quick Step by a mile, followed by some combination that has INEOS not very far off.

In terms of public perception, the Steppers have earned their rep by bludgeoning the Classics peloton into submission each spring, and then hunting for any extra goodies the rest of the way — a green jersey, some notable stage wins, lots and lots of rainbows. They don’t ever really sneak up on anyone. INEOS, on the other hand, have less of a statistical dominance so much as an economic case. They have ruled the Tour de France, until the emergence of Pogačar, and they have been even more ruthless on the transfer market, scooping up more young talent than they know what to do with.

Is any of this changing?

Quick Step’s position as the dominant team of the Classics year after year is definitely changing. Asgreen is terrific, but he broke up the Van Aert-van der Poel stranglehold on the classics by winning when the two stars had hit a small wall heading into last year’s classics season. That one, you may recall, came only five months after the previous cobbles season, and if the two top stars mistimed their form, well, I am not sure Asgreen gets that lucky again. He’s good, and well supported, but Jumbo will start as the top favorites on the cobbles, and if van der Poel makes it back, Alpecin-Fenix will be their primary challengers. INEOS might encroach on their turf too. In short, Quick Step are in a position to compete with the top teams in the classics, and even win… and since when is that enough? Are they just Trek now?!?

INEOS, meanwhile, have clearly ceded the Tour title to the epic Pogs-Rogs battle, and this is so very much not news, because it happened two years ago. The crazy thing is that this happened seconds after INEOS won its most recent Tour with its youngest-ever winner, Egan Bernal, who not only has the age of a disruptor but who rides like a guy who can win grand tours pretty often. And he won two of them, handily, until his most recent injuries which have put his career on hold, and that’s being hopeful.

Like Quick Step, INEOS are a terrific team. They could use their deep squad to make Pogs and Rogs uncomfortable at the Tour de France and the Vuelta a Espana. They have a broad array of strong riders who have an OK chance to win all sorts of races. They’ve got Ganna to win prologues and take the leader’s jersey all over Europe… and since when is THAT enough?!?

While INEOS would be more of a player with Bernal, and hopefully will be again, maybe even next year — the fact remains that they have lost a ton of ground to their top rivals in the last year. As strong as Pogačar is, he now can count on two rising young stars in Joao Almeida and Juan Ayuso as his top lieutenants, plus a group of stabilizing veterans in Majka, Bennett, Rui Costa, Soler and seeming endless other strong support riders. Jumbo-Visma, meanwhile, can surround Roglič with last year’s Tour runner-up Vingegaard, who will share captaincy (so they say), and support them with some collection of riders from Tom Dumoulin, Steven Kruijswijk, Sepp Kuss, Bobo Gesink (OK probably not), and superstar pace-setter Van Aert.

What does INEOS expect to happen at the Tour? Are they going to try to control the front of the pack, like they always used to, because they have a guy who if all goes right could challenge for third?

I can’t see the future, and the flood of talent means that this year’s major results will be as unpredictable as ever. Teams like Quick Step and INEOS are so deep in experience that they may get by on their past successes, because knowing how to win is an art and they have previously mastered it. And this isn’t the first time other formerly lesser teams came up with some cash, put together a great roster, and still didn’t get over the hump because it takes more than just money and recognizable names. But the shift toward UAE and Jumbo as potentially dominant teams feels like something totally new. They are showing what we had been seeing for a while, that they too know how to win, to take their advantages in money and talent and leverage them properly against the very best. They are talented, they are loaded with support, and they are winning.

And the old guard may, at long last, be powerless to stop them.

How to stop your bicycle from being stolen | UK news

Sex Hurt Me | How VuVa Dilators Improved My Sex Life

Adalyn is 7! | The Nutritionist Reviews