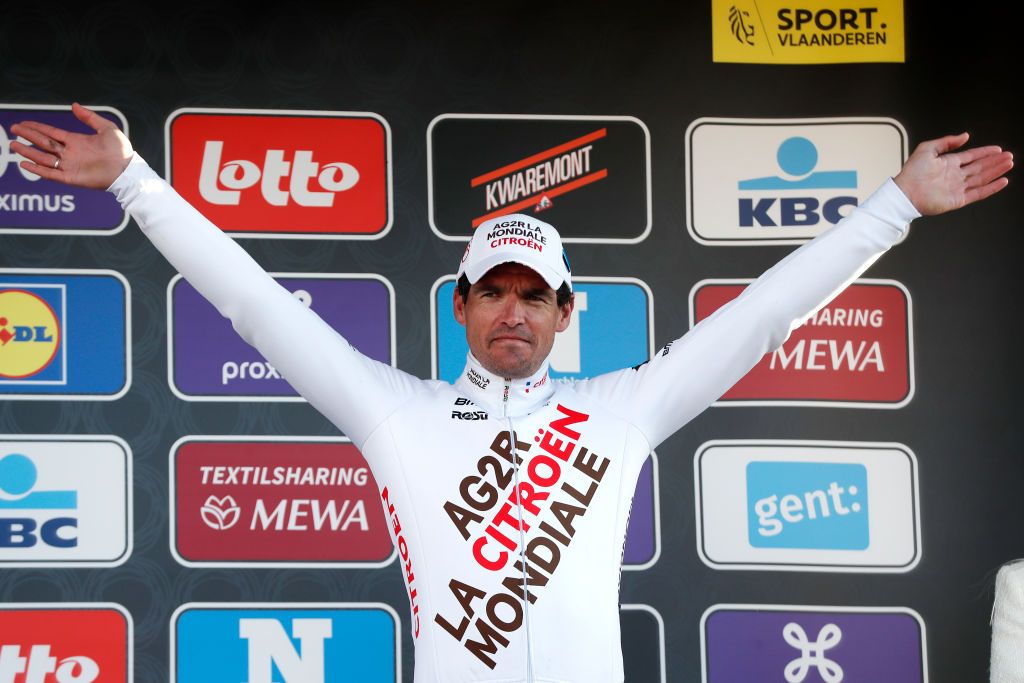 At the Omloop Het Nieuwsblad, there was only really one show in town as Jumbo-Visma’s Wout van Aert put on a clinical display to claim a solo victory in Ninove.

Such was the dominant nature of his win — dropping his rivals on the Bosberg before arriving home 22 seconds up on anybody else — that Flandrian papers Het Nieuwsblad and Het Laatste Nieuws later broke out superlatives such as ‘unbeatable’ and ‘he stands above all else’.

The AG2R Citroën leadership pairing, much like QuickStep-AlphaVinyl’s coterie of leaders, of Greg Van Avermaet and Oliver Naesen — the latter describing Van Aert as “out of this world” — were among those left in the shade on Saturday afternoon, even if the Belgian duo had ended the day in very solid third and fourth placings.

Speaking after the race, Van Avermaet, himself twice an Omloop winner, acknowledged that the strongest man in the race had won, adding that there was little he or his rivals could have done to stop Van Aert in the closing kilometres.

“Behind him, Ollie [Naesen] and I were in a group of riders that were very close,” he said. “We still hoped to get back to Van Aert, but that didn’t happen and then you’re riding for second place. It is nice that the best man in the race wins. For our team, it’s nice that we get a good result.

“Wout attacked at the right moment — at the toughest moment. That’s when the legs hurt and only the best can accelerate. It’s then you see that he stands out. He was very strong on the Bosberg, and then you still have to go to the finish line.”

Regardless of Van Aert’s strength, Van Avermaet’s third place came as something of a surprise to himsef. The 36-year-old said his expectations weren’t high when he set out from Gent’s ‘t Kuipke velodrome in the morning but noted that he found himself making the front of the race in the right moments, having chosen to follow more than try to force the moves himself.

“I surprised myself with the result. I didn’t have high expectations coming in, but I was able to do it in a different way for once. As a top favourite you want to race and force something. But here I could follow and use my experience and that worked out well. I got in front in the right moments and I noticed I was among the best.

“The final is a bit of a ‘position sprint’. At 700 metres out you have to be in a good position because afterwards it’s difficult to pass. I knew I’d be close to the podium if I was in Sonny Colbrelli’s wheel, and I tried to pass him but it didn’t work out.

Van Avermaet summarised his day saying, “it’s nice to be at the front again in Flanders and it’s great to get a good result.” He did temper expectations for the bigger races to come, like Flanders and Roubaix, saying that the peak years to win his home Monument in Flanders should be behind him now. There can still be a few percentage points of form to find, though.

“We shouldn’t start dreaming about the Tour of Flanders title, but you have to have the motivation for it,” he said. “If we have a good Tirreno-Adriatico, we can still gain a percentage or two. Wout is on top, and others will also improve, but I definitely have my value and think something is still possible in De Ronde.

“That’s just because it’s a race that suits me — it’s a bit longer and I still get better as the race goes on. There are still possibilities, but the best years to win De Ronde are over for me.”

A Breathable Crib Mattress? What You Need to Know

No tsunami threat after strong quake in New Zealand

Rehabbing From Trauma and Epilepsy to Become an Ultradistance Cyclist – BionicOldGuy