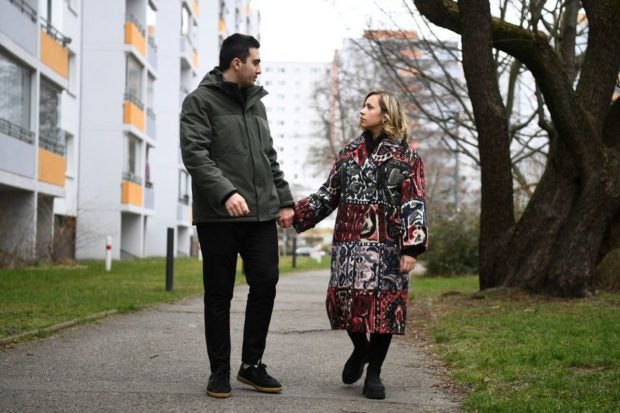 BERLIN — Anna Yarysh says she cries at televised footage showing the Russian military’s destruction of urban centers in her native Ukraine, but she finds solace in a boyfriend who feels her pain: Syrian refugee Anas Modamani.

Yarysh and Modamani, who met two years ago at the University of Applied Sciences in Berlin, never imagined that streets in Kyiv where they wandered during a visit last year would look like war zones that bring to mind the Syrian conflict.

“I always wanted to hear his story because it was important for me to understand what people in Syria went through,” said Yarysh, 28, sitting next to Modamani on a sofa in their one-room apartment. “But now that I’m living a similar situation with events in Ukraine, my feeling is different. You have to experience it to understand how difficult and scary it is.”

Hanging on a wall in their apartment is a red placard with the words “Stop Putin,” a Syrian flag and a hand in Ukraine’s blue and yellow national colours making a victory gesture.

Modamani, 24, fled Syria in 2015 shortly before Russian President Vladimir Putin launched an aerial military campaign against opposition strongholds that helped tip the conflict in favour of President Bashar al-Assad. He and Yarysh use their free time to bring food and clothing to Ukrainian women and children arriving in the German capital on trains from Poland.

For Modamani, train stations filling with Ukrainian refugees evokes memories of 2015 when he and thousands of migrants mainly from Syria and Iraq were welcomed by applauding Germans at the main train station in the southern city of Munich after harrowing journeys on foot from Greece.

“I tried to forget memories of my experience in Syria and now the memories are creeping up because (of) my girlfriend who is going through similar circumstances,” said Modamani. “We have a common enemy: Putin. He obliterated my homeland, and now he is doing the same in Ukraine.”

Yarysh takes a moment for a video phone call with a childhood friend in Kyiv who said he was transporting cat and dog food for abandoned pets roaming the streets of the Ukrainian capital, searching for their owners.

The brief conversation ends with smiles and “Long live Ukraine.”

‘I’ve run out of tears’: Ukrainian mother flees but vows to return

Ukraine and Russia: What you need to know right now

Black Bean and Corn Salsa with Avocado (Fresh and Healthy)