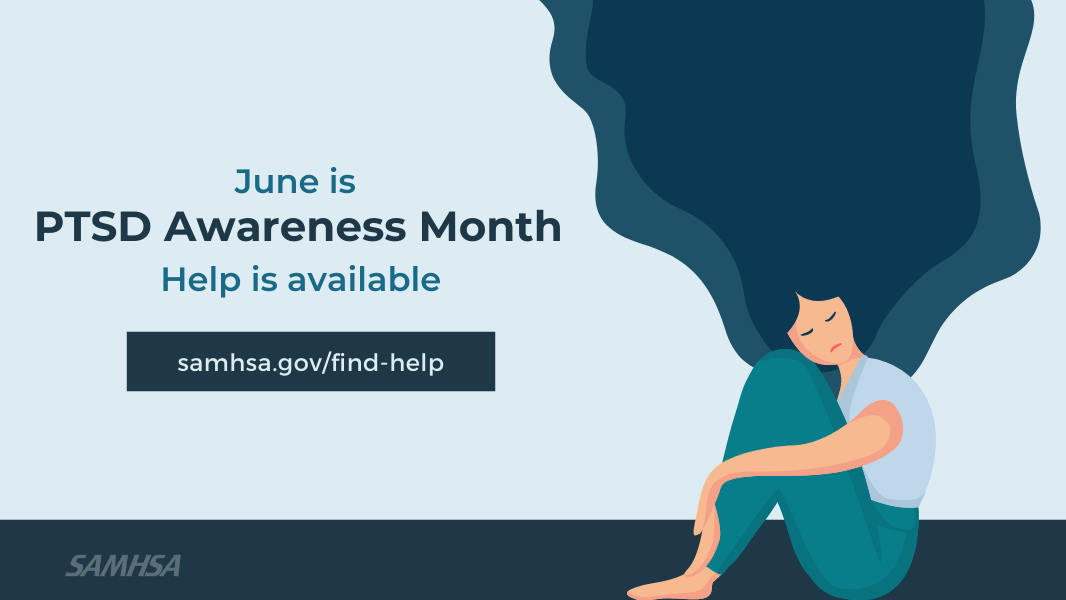 Although often associated with combat veterans, Posttraumatic Stress Disorder (PTSD) is a mental health condition that can impact any person of any age after experiencing or witnessing a traumatic event. Such traumatic events might include military combat, sexual or physical violence, natural disasters, or severe accidents.

The term “PTSD” first appeared in 1980 in the third edition of the Diagnostic and Statistical Manual of Mental Disorders. However, earlier medical publications referred to conditions described as “soldier’s heart,” “shell shock,” and “war neurosis.” With the prevalence of PTSD in the military community, it is not surprising that the effort to create awareness was launched as a tribute to a service member. On June 27, 2010, PTSD Awareness Day was established in recognition of Staff Sergeant, Joe Biel, a National Guard service member who experienced PTSD after two tours in Iraq and died by suicide in 2007. In 2014, the federal government designated the entire month of June as PTSD Awareness Month.

Many organizations engage in PTSD-awareness activities throughout June to highlight information about PTSD symptoms, including available treatments. This year, PTSD awareness certainly has a critical role as communities throughout our nation have experienced recent mass casualty events involving children, as well as people who were targeted due to being members of diverse populations. Additionally, next month, the National Suicide Prevention Lifeline will become available by dialing 988 – the nation’s first three-digit mental health crisis number. This is a vital step in increasing accessibility and use of mental health crisis interventions and resources. Years of clinical research show that effective treatments for PTSD include psychotherapies and medications. Some of these evidence-based treatments include Prolonged Exposure, Cognitive Processing Therapy, and Eye Movement Desensitization and Reprocessing.

According to the National Center for PTSD about six percent of the population will have PTSD at some point in their lives and about 12 million adults in the United States have PTSD during a given year. Additionally, the number of Veterans with PTSD varies by service era. Approximately 11-20 out of every 100 Veterans who served in Operation Iraqi Freedom or Operation Enduring Freedom have PTSD and in any given year, about 12 out of every 100 Gulf War veterans have had PTSD. It is estimated that about 30 out of every 100 Vietnam Veterans have had PTSD in their lifetime.

After a traumatic event, it is normal to have stress reactions including upsetting memories, feeling on edge, or having trouble sleeping. If symptoms exist for longer than a few months, a person may have PTSD. Individuals with PTSD may experience nightmares or unwanted memories of the trauma, avoidance of situations that bring back memories of the trauma, heightened reactions, anxiety, or depressed mood that impact their ability to perform in their social life, work life, or other important activities. PTSD in children may present differently. They might think there were signs that the trauma was going to happen and subsequently look for similar signs thinking that this will help them avoid future traumas. These children may present with hypervigilance and challenges with executive functioning that impede academic performance. Symptoms of PTSD might also show through their play (e.g., playing shooting games after a school shooting).

If you or a loved one are experiencing symptoms of PTSD, it’s important to know that multiple treatment and support resources exist:

Additionally, multiple resources exist for providers who are interested in increasing their capacity to address the needs of individuals experiencing symptoms of PTSD:

We can all help spread the word to raise PTSD awareness. Individuals, families, behavioral health providers, and communities all play a vital role in addressing the needs of trauma survivors and individuals who are living with PTSD.

Is There An Increased Risk?

Presidential candidates weigh in on civil union and divorce

Digestive Enzymes and Their Importance to Your Diet – Plant-Based Diet – Recipes &...