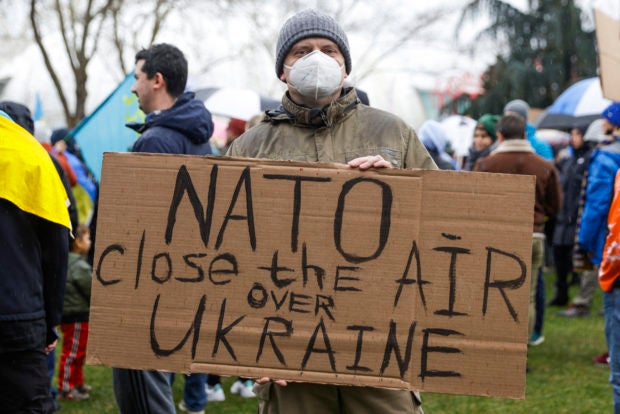 Slava Laban of Belarus holds a sign in favor of NATO closing the airspace over Ukraine during a “Rally Against the War With Ukraine” event in Seattle, Washington on February 26, 2022. AFP

Britain has banned Russian flagship carrier Aeroflot from flying over the UK. Meanwhile Bulgaria, Poland, the Czech Republic, the Baltics, Germany and Slovenia have closed their airspace to Russian carriers.

“Air carriers of these states and/or registered in them are subject to restrictions on flights to destinations on the territory of the Russian Federation,” the federal air transport agency Rosaviation said.

It added that the restrictions included transit flights through Russia’s airspace.

On Saturday, Russia announced it will be barring flights from Bulgaria, Poland and the Czech Republic.

Also late on Saturday Austrian Airlines, Austria’s national carrier, announced it was canceling flights to Russia and avoiding Russian airspace for at least the next seven days.

The airline said in a statement it had taken the decision “due to the developing regulatory situation”.

Russia stripped of major events as invasion of Ukraine intensifies

What You Need to Know

DOTr to start vaccination rollout at Recto, Antipolo stations of LRT-2 on Feb. 22

Intuitive Kitchen: How to Stock Your Kitchen for Intuitive Eating — Registered Dietitian Columbia...