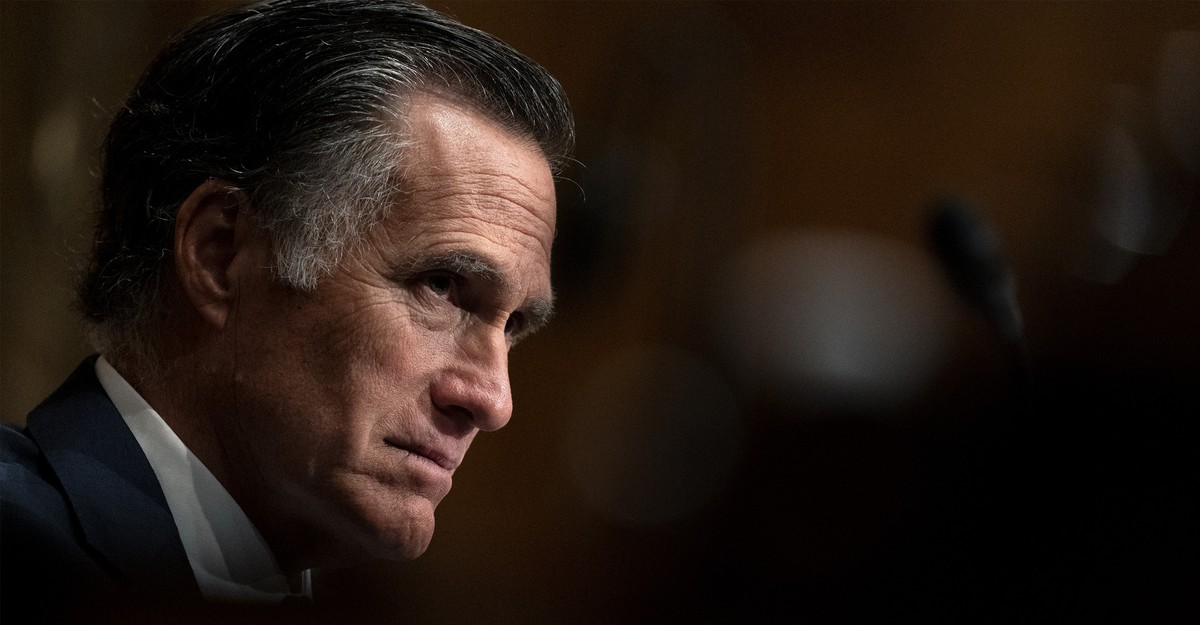 On October 22, 2012, Mitt Romney sat across a table from President Barack Obama for the final debate of the presidential election. The theme of the night was foreign policy. Obama’s campaign had been working all year to cast Romney as out of touch and inexperienced, and when the moment came the president deployed what seemed like a devastating putdown.

“A few months ago, when you were asked what’s the biggest geopolitical threat facing America, you said Russia. Not al Qaeda. You said Russia,” Obama told him. “And the 1980s are now calling to ask for their foreign policy back.”

In the days that followed, Obama’s allies repeated the talking point. Romney was ridiculed for his preoccupation with Russia and accused of having an outdated Cold War mentality that made him unqualified for the presidency. Nearly a decade later, with Russia carrying out a full-scale invasion of Ukraine, some are offering mea culpas—and wondering whether they should have paid closer attention to Romney’s warnings about Russia.

When I spoke to Romney, who now serves as a U.S. Senator from Utah, on Saturday night, he didn’t seem especially interested in taking a victory lap. But he did express frustration that the past several presidential administrations have not taken the threat posed by Russia seriously enough. We also talked about how the U.S. should be aiding Ukraine; the Republicans who praise Putin; Donald Trump’s role in the crisis; and how he sees it ending.

Our conversation has been lightly edited for length and clarity.

McKay Coppins: During the 2012 election, you identified Russia as America’s number one geopolitical foe, and were mocked for it by President Obama, then Vice President Joe Biden, and by many commentators. You were repeatedly accused of having an outdated Cold War mindset. Do you believe you understood something about Russia and its ambitions that they didn’t?

Mitt Romney: You know, it’s hard for me to believe that they didn’t realize that I was right at the time. Because it was so obvious. Russia was supporting all of the dictators in the world, whether in Syria, Venezuela, Cuba, North Korea. They were opposing us at the U.N. whenever a critical measure came forward. They were our geopolitical adversary… And if anybody didn’t see that, who was watching carefully, I find it hard to believe.

I guess politics can be blinding. My guess is the Obama team thought that would be politically advantageous to say, and the compliant media picked up the message and drove it home as hard as they could … I mean, I think it was The New York Times that said, ‘this proves Romney is unqualified to be president.’ Like, oh my goodness, guys. Come on. Who do you think was our geopolitical adversary back in 2012? I’d love to know what their suggestion was. Clearly, today, China is a greater threat to our security and our economic vitality. But they weren’t a geopolitical player in the sense that Russia was back in 2012.

The reality is President Obama’s underestimation of Russia’s intent, Vladimir Putin’s intent, is only magnified by what happened over a couple of decades. It’s not just Obama. We’ve seen this for many years. We had not sufficiently responded to villainy in the past, whether in Georgia, Ukraine, with the Crimea, with Syria, and with assassinations. We’ve downplayed those things and somehow pretended that if we just reset, that everything would be fine. President Trump invited Russian ambassadors and foreign ministers to the White House as soon as he got there. He said, Why don’t we have Russia brought back into the G7?

It’s this blindness to reality that sometimes accompanies politics that, I think, has been most unfortunate.

Coppins: Do you think Putin has been emboldened by this mindset taking hold, at various points, in both major political parties in the U.S.?

Romney: There’s no question in my mind that we have been naive as a nation over the last couple of decades with regard to Russia’s intent and Putin’s plans. Putin has seen us reduce our military footprint in Europe, pull out of Afghanistan in a disastrous way, slow-walk getting defensive arms to Ukraine. And he recognizes that, you know, we don’t have the kind of posture of strength to deter a committed adversary.

Coppins: What’s interesting is that since 2012, a lot of people in American politics have effectively switched sides on this issue. You’ve had people like Madeleine Albright publicly apologize for criticizing your position on Russia. This week, Democratic Congressman Ted Lieu said you were right about Russia. Your name was trending on Twitter as people discussed your warning about Russia. Do you feel vindicated?

Romney: I’m pleased that more people recognize how great the peril is of an emboldened Russia. But I don’t think that, by any means, I was the only person that saw Russia’s intent. I remember John McCain said he looked into Putin’s eyes and saw the KGB. I mean, there are many, many people who saw Putin for what he was.

Coppins: Meanwhile, there is a vocal segment of the Republican Party now that has been downplaying the severity of what Russia is doing. Some are even celebrating Putin, or talking about him as a strong leader. There’s also a general movement toward isolationism among certain members of your party. What do you make of this phenomenon?

Romney: Well, I think you’re seeing a fringe of our party that still admires Putin. But the larger group that was celebrating his audacity has, from what I can tell, changed their pleadings, and are suddenly coming to the support of Ukraine. And perhaps that will continue. I imagine that this isolationism and this hero-worship of an authoritarian like Putin is coming face to face with the new world of media, where everybody has a cell phone, and people are seeing real human beings suffer. And they recognize, this is not a war. It’s not a battle between two militaries. This is a brutal invasion of a free democratic people by an authoritarian thug and there’s no justification for it. And its brutality and vile nature is able to be seen by people all over the world.

And it’s shaping public opinion quickly. So I think those that thought they could isolate us from the reality and say, Oh, it’s 6,000 miles away, what do we care?—when you see mothers and children and women in the street holding Molotov cocktails against tanks, it’s hard to argue, This doesn’t matter to me.

Coppins: That brings us to the present situation. If you were president of the United States right now, what would you be doing differently?

Romney: First, let me just step back and just say that I think the Biden Administration was wise to bring in the allies, to let them see the classified information about what Russia was doing, and to acquaint the world with our intelligence assessments. I think that was a very wise move, and has made it harder for Putin. And has made the ultimate cost for Putin a great deal greater. At the same time, I think the administration should have been much more aggressive in sending defensive weapons to Ukraine. The fact that there are not huge stockpiles of anti-aircraft missiles, anti-tank weapons, grenade launchers, I just find that to be extraordinarily disheartening.

So I give the administration credit for the action taken in the last several weeks. But I’m critical of the continuation of under-arming Ukraine during this President’s term, and in the terms of the prior presidents, both Trump and Obama. And as you recall, President Trump withheld funding and arms to Ukraine in order to get an investigation into the Bidens. It’s unthinkable that this has been the posture of our country.

Coppins: You voted to impeach President Trump for that, and were famously the only Republican senator to do so. Is there a throughline that connects your approach to Putin and Trump? They’re obviously different but both have authoritarian personalities.

Romney: I doubt I’m unique in that regard, but I have a very sensitive antenna toward those who promote authoritarianism. The default setting in world history is authoritarianism. Freedom is a rare appearance on the historical map of the world, and requires extraordinary, extraordinary vigilance and effort to preserve it. And when I see leaders here or elsewhere moving towards authoritarianism, it sets off alarm bells. Because I do read history. The history of the world is strongmen lying to people, gaining power over them through the use of force, and oppressing others for centuries.

Coppins: How do you see this war in Ukraine ending?

Romney: There are different scenarios. One is that the Ukrainians fight bravely on and Russia tires of the conflict and pulls back but says it won its objective to save face. That’s what I hope for.

Coppins: Are you surprised by the fierce resistance that we’ve seen from Ukrainians?

Romney: President Zelensky is one of the most courageous people of our century. He is the face of good and Putin is the face of evil. Zelensky is on the streets in Ukraine, wearing battle fatigues, ready to fight for his country. And Putin is sitting behind this massive table in this huge white room, it looks like a mausoleum where honesty and honor went to die. Putin is becoming smaller and smaller on the world stage. He’s being diminished. I hope and pray Zelensky survives, but I know that there’s a substantial risk he doesn’t. This is one of the great heroes of my lifetime.

I’m convinced that ultimately good will succeed. I don’t see a scenario where Putin is able to put in a henchman to run Ukraine and everything goes swimmingly for him. I hope that the Ukrainians are able to fight him off.

Women live in fear and despair in South African hostel