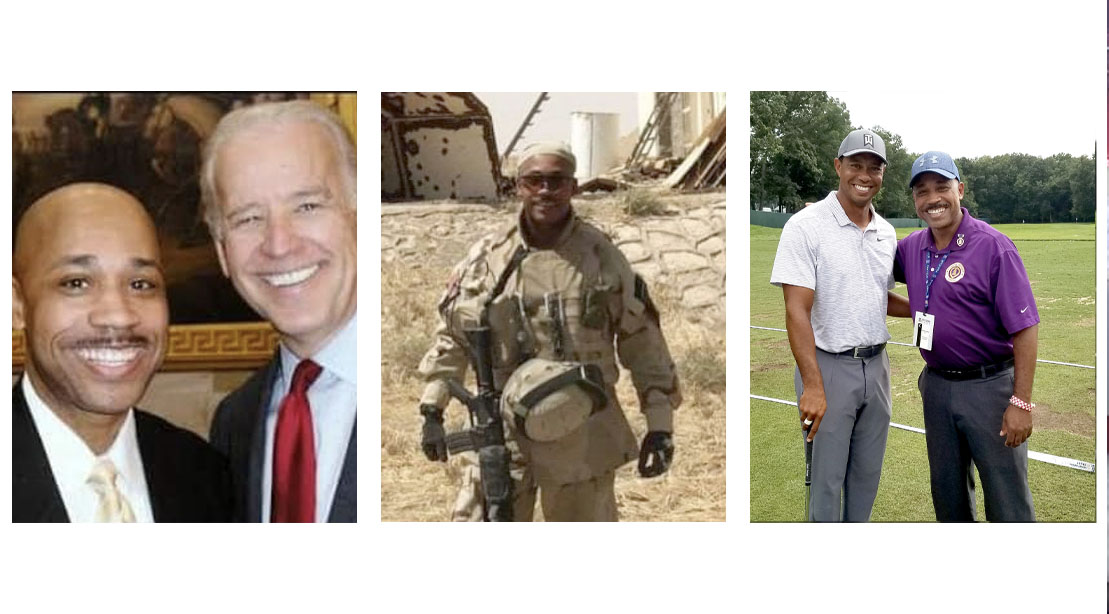 When Charles Eggleston steps onto a golf course, he is doing far more than trying to hit a ball off a tee into a hole. He’s taking yet another step in an incredible journey that has inspired thousands of people, including presidents, golfing legends, and everyone that has had the opportunity to hear him tell his story. The Salute Military Golf Association (SMGA) supporter and player credits the game for helping him improve his fitness, and not just what you see when he takes a swing. Golf is a lot more than that to him.

“That’s mental fitness as well, the structure of fitness,” the Purple Heart and Bronze Star recipient said. To understand why mental fitness is so important to him, you have to understand the journey he went on to reach the point he is at today.

When Eggleston was growing up, he was a fan of “The A-Team,” including Mr. T, he played with G.I. Joe action figures, and the theme of his interests appeared to revolve around the military. He described the servicemembers who fought for their country during his youth as “superheroes.” So, it made sense that he would go on to enlist himself later on. He actually gave up a career as a computer engineer in Washington, D.C. when he made that choice. His mother was not pleased with that decision after she had found out.

“When my mother found out, she went crazy,” recalled Eggleston. “She was like ‘what the hell? You’re making six figures, you’ve done everything you need to do in life, you don’t need to do that.’”

However, it was already too late by the time his mother had learned of his choice because Eggleston was already in basic training. She questioned why he made the decision her son made, but he was actually questioning how he couldn’t serve.

“The transition was when I started saying to myself ‘I’m getting all of this, I’m basically receiving, and I haven’t given anything to this country.’ It was just an epitome to me that I decided ‘let me go in the military.’”

Charles Eggleston made that commitment, and a great commitment it was. Within weeks of the Sept. 11 attacks on the United States, he was sent to Iraq to take part in combat. He explained that what people may perceive as war in that part of the world was far different than it really was.

“It was urban with a mixture of jungle warfare. When most folks think of Iraq, they think about a place with all sand. No, it’s very woody in certain parts of it,” he revealed. “Palm trees and bushy areas, there’s a lot of places to hide.”

Eggleston’s team was among the first to be sent over, and he came back to the United States upon completion of that mission. He would actually be sent back for another mission.

The second trip was even more intense because the opposition had more instruments of war, including IED’s. Eggleston’s team suffered the effects of one of those IEDs. Eggleston was injured so badly, that he thought he was going to die as well. When he was receiving medical attention, they almost amputated his leg due to confusing someone else’s X-rays for his own. Eggleston survived, but he had to undergo well over 50 surgeries during his recovery after he came back to the United States. He expressed that part of what he calls “The Journey” included a lot of rehabilitation, and it took a great toll on his mental health as well as his physical health.

“I had to relearn everything. It still pisses you off when you think about having to recalculate everything about you as a person,” he said solemnly. “It became a joke to some on the outside. I can understand kids saying something, but some adults did as well. I had beams going through my legs, and I had a special apparatus to help me walk most of the time,” he recalled. “Kissing destiny on the face changes your soul. When you smell death without passing on, it’s something else.”

Charles Eggleston would spend the rest of his military career recovering in Walter Reed Army Medical Center. However, his most famous act of service was while he was in the hospital. The conditions that the servicemembers were staying under during that time were substandard, and Eggleston made that clear to President George W. Bush when he came in to express his thanks to those that were there.

“They were taking notes big time. I still remember him saying ‘we’re going to fix this.’”

That encounter would lead to what became known as the “Walter Reed Scandal.” and Eggleston’s speaking out led to the hospital being temporarily shut down. In the end dramatic changes in how residents were treated going forward. Many veterans that have received medical care since that time can thank Eggleston for the improvements that were made.

While he was working his way through recovery, Eggleston had another visitor that would help him change his life for the better. PGA Golfer Jim Estes visited him and wanted to take him out for a golf outing.

“He said ‘I’m going to fix you through fitness,’” Eggleston recalled. “I still remember that.”

That offer was met with resistance at first, but then Estes upped the stakes in the form of a $100 bet. If Eggleston didn’t enjoy himself, Estes would give him the money. If he did, then there was no debt to be paid.

The duo went to Chevy Chase Country Club to play. PGA legend Phil Mickelson was there that day as well as other PGA pros such as Bubba Watson. When Charles Eggleston took to the tee, he hit a shot clean down the fairway. The same happened with another tee off. The challenge of hitting that little white ball accurately provided a mental challenge to the veteran, who expressed his gratitude for that moment.

“The game of golf became my salvation,” said Eggleston “If anyone ever asks about my story, golf saved my life. It became a new beginning for my new journey.”

Charles Eggleston gradually improved at the game, and he would rub elbows with many other pros along the way, including 15-time major winner Tiger Woods. Woods and other athletes reached out and offered support and friendship to Eggleston because of how inspired they were by his experience and ability to overcome that adversity he faced along the way.

While he enjoys spending time with those that are considered the best in his sport, the greatest benefit for him was helping him reclaim his mental and physical well-being. He still trains with weights at least four days a week and plays as often as he can. He is ranked as one of the top Wounded Warrior golfers in the nation, and he plans on enjoying the gift he has been given for a long time to come.

“Golf has helped me break down what we call the juice, the bad stuff in war and life. Physical fitness gave me something that no one can take away from me. I can’t wait to smell that next day. Physical fitness is the silver bullet to so many bad attributes.”

Black Women & WOC Are More Likely to Have Traumatic Births, Here’s Why – SheKnows

Word of the Month: Believe

How to Make Kombucha at Home and Flavor It