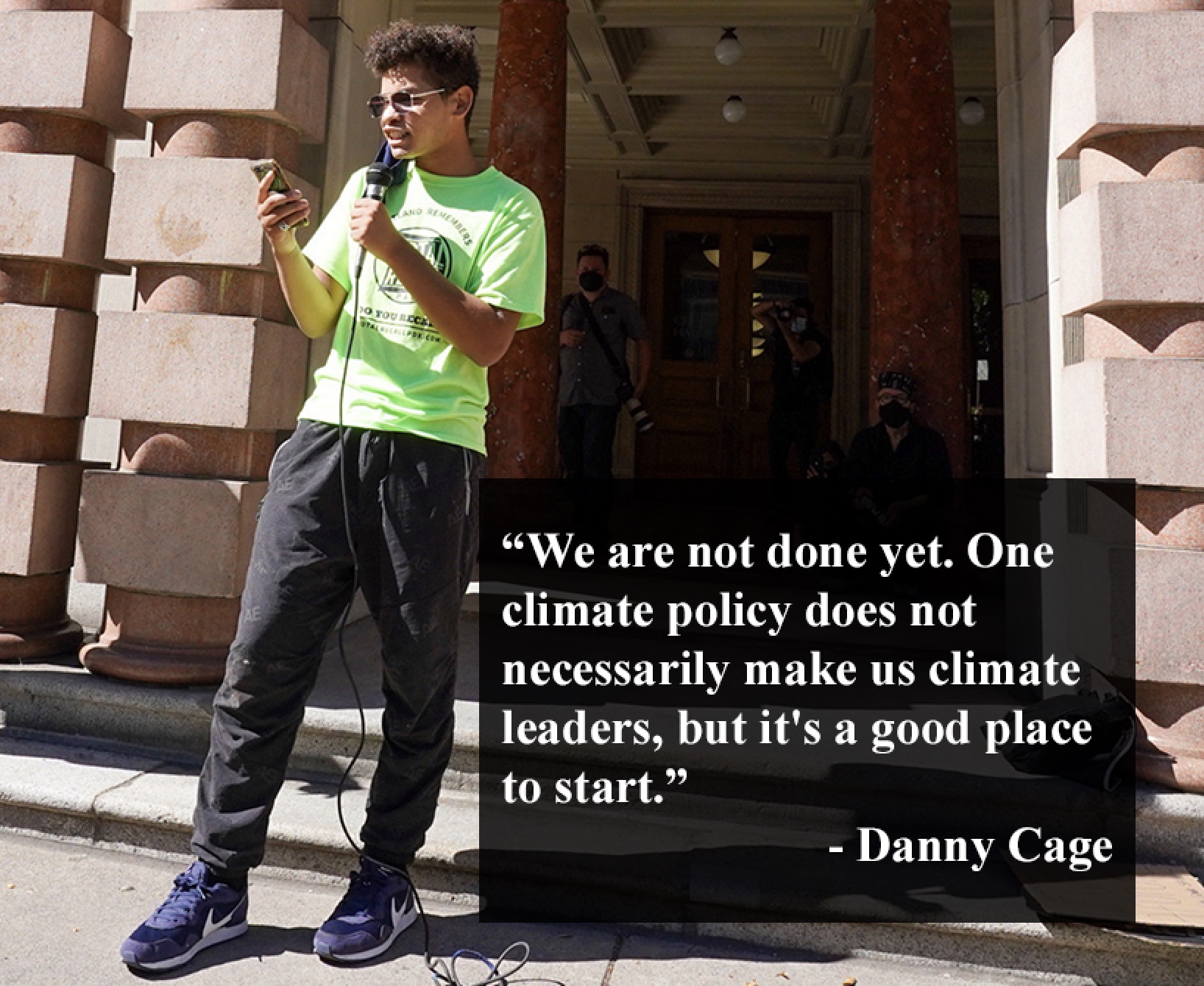 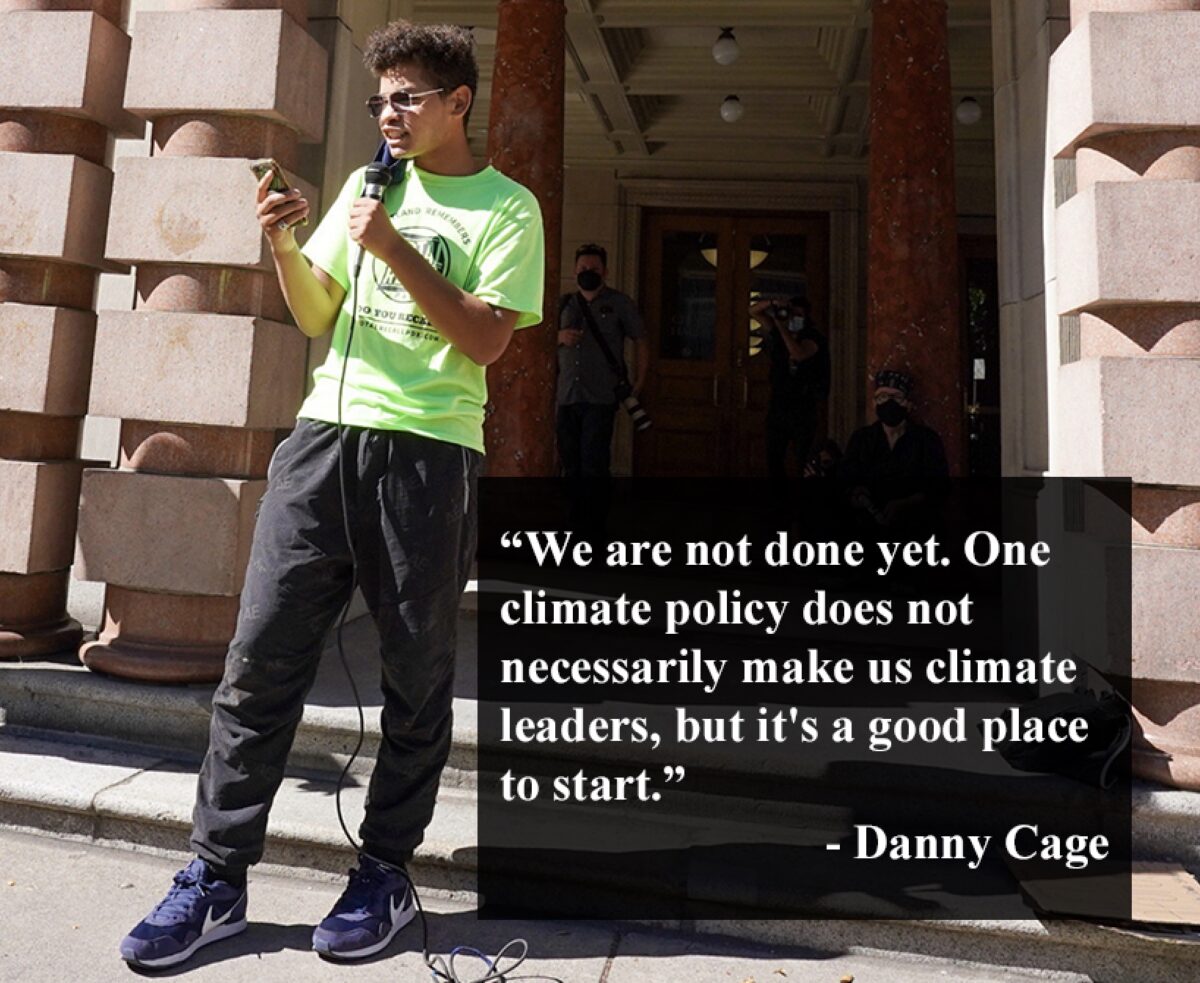 “This is not just a net-zero policy. It’s a climate education policy.”
— Danny Cage, Sunrise PDX and PPS student rep

How important is a Portland Public School district’s climate policy? For youth activists, it’s important enough for them to dedicate years of their time and get involved on the front lines of advocacy both inside and outside the halls of power.

On Tuesday, the PPS board passed their seven-page Climate Crisis Response, Climate Justice and Sustainable Practices Policy. The policy had been in the works for two years, undergoing 25 revisions in the process. While headlines focus on the policy itself, the fact that it was youth climate activists who helped create the policy and fought so hard for its passage is just as important. 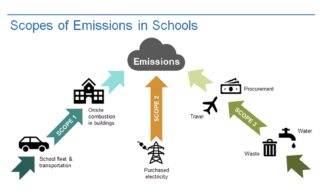 From page six of the Climate Crisis Response Policy.

There are two overarching objectives to the policy: reduce greenhouse gas emissions 50% by 2030 from 2018-2019 levels and reach net zero by 2040, and to improve “engagement, resilience and wellness”, an objective that’s focused on education for staff and students.

For 17-year-old activist and PPS student rep Danny Cage, whose opinion piece about the policy we shared last week, the GHG reduction numbers are key, but cultural shifts will only be made through curriculum and school policies that address the realities of the climate crisis.

“The education components can do a lot. This is not just a net-zero policy. It’s a climate education policy,” Cage said to me in a recent interview. “A lot of people want to do the work and they don’t know how and they’re limited by that. Once we give everyone an educational toolbox, they can go out and fix these things in this world.”

PPS has set specific goals that include building more energy-efficient schools, maximizing green spaces to sequester carbon, and much more.

We’re most interested in how the plan addresses curbing carbon emissions from transportation. The goal is outlined as follows:

Goal 1.4: PPS will minimize greenhouse gas emissions from student and staff transportation, including transitioning to electric or low-emission vehicles.

1. Establish school-based infrastructure and support for staff and students to walk, bike, bus or telecommute, in order to reduce single-occupant car commuting.

2. Transition PPS and contracted vehicle fleet to electric or low emissions or renewable fuels. Work with industry, utilities, and the state and federal governments to reduce the costs of shifting towards electric or low-emission vehicles.

3. Educate and communicate to students, parents and staff about benefits of and opportunities to reduce single-occupant car commuting and idling.

Cancel car culture for the climate

Adah Crandall is a 15-year-old PPS high school student who was involved in advocating for this policy. As one of the leaders of the Youth vs ODOT movement organized by Sunrise PDX, Crandall has been focused on stopping Oregon Department of Transportation (ODOT) freeway expansions and trying to educate people about the impact of transportation emissions on the environment.

Crandall thinks PPS should do more to reduce the number of people who drive to schools. For one, she says the district should put its money where its mouth is and take a stronger stance against the I-5 Rose Quarter freeway expansion project, which ODOT says would require relocation of Harriet Tubman Middle School (Crandall’s alma mater) if it moves forward.

She also says the district should beef up its relationship with TriMet to make it easier and cheaper for kids to ride public transit.

“It’s shocking how many people don’t know how to take the MAX or the bus.”
— Adah Crandall

TriMet offers reduced fares to youth under the age of 17, and has partnered with PPS to provide all high schoolers with free transit passes throughout the school year. Crandall thinks this program should be extended to younger students and be valid during the summer.

“It’s shocking how many people don’t know how to take the MAX or the bus,” she says. “At my age, everyone is getting their driver’s licenses. It’s a signifier of freedom and independence, of course people want that,” Crandall added. “It’s difficult because we don’t have the incredible idealistic transit system that would encourage people to take transit more often.”

It’s deeper than mode split outcomes to Crandall, who believes getting people out of cars can create stronger social bonds within school communities.

“Car culture promotes the idea of isolating ourselves from one another. It furthers a lack of connectedness and teaches us to fear one another in a way that is really hurting the world,” she says. “When you take the bus, you have conversations with a lot of strangers. It gives you new perspectives on things to be in a space with people you wouldn’t normally interact with.”

Before the PPS meeting Tuesday, they sent a letter to the PPS Climate Response Team asking for specific policies to help meet Portland’s goal to reach 25% bicycle mode share by 2030.

“Our focus on bicycle transportation impacts not just our region’s greenhouse gas emissions, but also improves public health, equity (owning and maintaining a private car is costly!), and overall quality of life,” the letter says.

As well as developing safe infrastructure, Bike Loud suggests “bike trains”, where large groups of parents and kids travel to school by bike together. They also pushed for an expansion of the city’s Biketown for All reduced fare program to students 16 years and older. 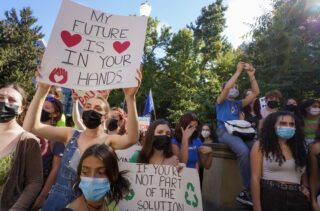 Cage and Crandall both say they don’t think PPS would’ve created this kind of climate policy if it weren’t for them forcing the district’s hand. Young Portland climate activists have taken bold, determined action to get elected officials and state and city transportation departments to listen to them.

This is something they’ve been recognized for on a national stage, with Crandall and the Youth vs ODOT movement recently making headlines in outlets like Bloomberg and Vice.

“We have this policy now because of years of youth strikes and youth showing up at school board meetings,” Crandall says.

But they can’t do this all alone, and admiration from adults about how inspiring these students are is not enough. They’re still operating from a place of doubt, because promises have been broken time and time again. (As Greta Thunberg says, a lot of these policies are just ‘blah, blah, blah.’)

“We’re skeptical of PPS’s commitment on following through with the promises and commitments they’ve made,” Crandall says. “There will be a lot of continued pressure from students and educators and community groups to make sure they’re held accountable.”

And Cage, who helped write the policy’s preamble and introduced it to PPS Board members Tuesday said, “We are not done yet. One claim of policy does not necessarily make us Climate Leaders, but it’s a good place to start.”

Taylor has been a BikePortland’s staff writer since November 2021. She has also written for Street Roots and Eugene Weekly. Contact her at [email protected]

Broccoli vs Cauliflower: Which is Healthier?