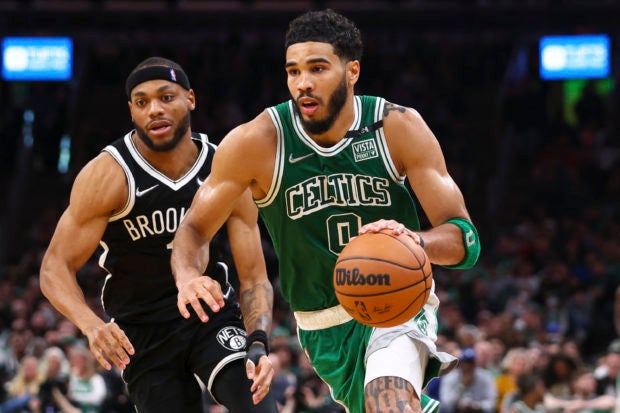 Jayson Tatum of the Boston Celtics drives to the basket past Bruce Brown of the Brooklyn Nets during a game at TD Garden on March 6, 2022 in Boston, Massachusetts.  (Getty Images via AFP)

The victory was the Celtics’ 14th win in their last 16 outings, and leaves them in fifth place in the NBA Eastern Conference standings with 39 wins and 27 losses.

Tatum’s display stymied a Brooklyn side who welcomed both Kevin Durant and Kyrie Irving to the same starting line-up for only the fourth time this season.

Durant finished with 37 points for the Nets while former Celtics player Irving added 19.

Irving was taunted mercilessly throughout by Boston’s raucous home crowd, with chants of “Kyrie Sucks” echoing around the TD Garden arena.

Jaylen Brown added 21 points while Marcus Smart finished with 14. Al Horford (13 points) and Robert Williams III (10) completed the bulk of the scoring for the hosts.

Brooklyn got off to a fast start to lead by five points after the first quarter, and took a nine-point lead in the third.

But Boston hit their stride down the stretch and pulled clear thanks to an 18-point fourth quarter haul from Tatum to seal victory in a game that saw the lead change hands 28 times.

“Obviously we’ve been on a good stretch. We’re just having fun competing. It wasn’t always pretty today but everyone contributed and we just figured it out.

“And those are the best wins — when you just figure it out, find a way to win whatever it takes. And that’s what we did.”

“This is what I dreamed about as a kid. I worked my whole life to get here. Obviously I have a long way to go before I accomplish what I want to accomplish, but I’m staying in the moment and enjoying it, doing what I love every day.”

Check Out This Massager At Target – SheKnows

How to successfully combine running and intuitive eating