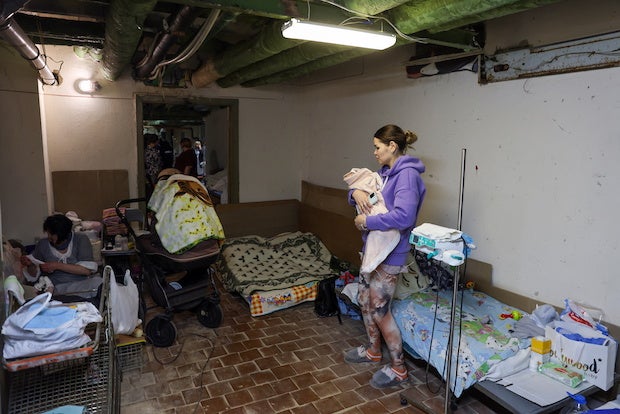 Children patients whose treatments are underway, parents, and medical staff stay in one of the shelters of Okhmadet Children’s Hospital, as Russia’s invasion of Ukraine continues, in Kyiv, Ukraine Feb. 28, 2022. (Photo by UMIT BEKTAS / REUTERS)

KYIV — In the dingy basement of Ohmadyt Children’s Hospital in Kyiv, mothers and babies find what comfort they can on makeshift beds and blankets laid out on either side of the concrete aisle.

Older children who are too sick to go home or flee the capital with their families following Russia’s invasion of Ukraine are also adjusting to life under siege, staying away from windows and lying in corridors on intravenous drips.

Staff, patients, and their families share Ukrainians’ sense of shock at being caught in a conflict few could have foreseen even a few days ago. Like others, their immediate focus is on survival.

The biggest hospital of its kind in the country, Ohmadyt normally has up to 600 patients, but that number is now around 200, he said during a media visit to the state-run clinic in central Kyiv organized by the government.

In a surgical ward, surgeons and nurses operated on a 13- year-old boy brought in by an ambulance after being wounded in the armed clashes.

So far four children have been treated for shrapnel and bullet wounds — victims of shelling in and around Kyiv and skirmishes between Russian and Ukrainian forces. One remains in serious condition.

Among the mothers at the hospital is Maryna, whose nine-year-old son suffers from a blood cancer that requires regular treatment.

Earlier on Monday, air raid sirens wailed across the largely empty streets of Kyiv warning of another possible missile attack by Russia, which calls its actions in Ukraine a “special operation”.

“There are bombings, sirens, we have to go (downstairs),” said Maryna. “We also receive treatment here, medications we have, but we need more food … basic stuff,” she added, holding back tears as she spoke.

So far the hospital has been spared the bombardment that has reached the outskirts of the city, although staff said they have heard gunfire in recent days.

Kyiv is girding for worse battles to come as Russian forces approach, and the entrance to the hospital was guarded by heavily armed police during the media visit.

In the underground bunker, dozens of children and their parents lay on mats, some in need of additional oxygen and others connected to drips.

Patients in intensive care who cannot be moved have been placed in relatively safe areas of the building. Children slept on chairs in reception areas; along one corridor, gold-colored Orthodox icons were propped up against a railing.

The focus is also on the security of medical staff.

“We also must take care of personnel, because if they die or get injured, what do we do, who will treat patients?” asked Valery Bovkun, a microsurgeon at Ohmadyt.

Zhovnir, the chief surgeon, said the hospital had stockpiled enough medications for a month, but added that it needed food for newborn babies.

“Of all things we need peace most … all of this is the tip an iceberg … people are, for example, asking me where to buy insulin for children, pharmacies are not open.”

And he worried as much about children who were not able to make it to the hospital as those who were stuck there.

The hospital normally treats six to seven children a day for common complaints such as appendicitis, but that number has dropped dramatically.

“They could not have vanished, they simply cannot come here,” he said.

One Size Does Not Fit All

Shooting of Cebu journo a ‘chilling precedent’ to what awaits press in 2022 polls...

Barcelona held to draw by Napoli, Rangers win in Dortmund in Europa League