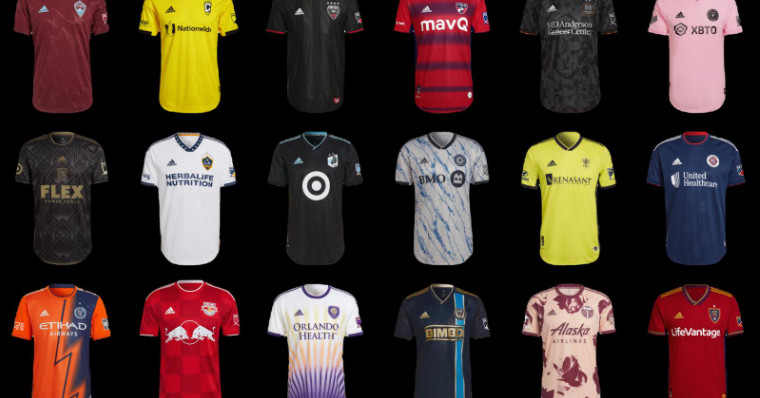 In our last edition of these rankings, we were left frustrated with the direction Adidas and MLS chose to take. After promising a reduction in white and white-adjacent kits, the brand with the three stripes was unable to meet that expectation.

A swath of white kits, met with bland offerings and templates, left us calling for Adidas to be completely replaced and our hope in the future was shot.

However, this year we were pleasantly surprised by the turnaround both the league and the kit manufacturers have done overall. Gone are the ghastly EQT shoulder stripes. The number of templates and plain designs have been drastically reduced. There are some bold moves here — some paid off, some didn’t. But, there seems to be a better attempt at making things interesting for MLS fans who are tired of decades of being left behind as an afterthought.

Well, it also helps that this cycle saw a lot more home kits than away kits. But even still, I count a total of only four mostly white or gray kits – with one of those being LA Galaxy’s traditional home whites. I’m not willing to say that Adidas should retain their spot as the only kit manufacturer for MLS teams. However, with a number of clever and unique designs here, they can leave the timeout corner.

This time around, we’re going to condense things down into slideshows for each letter grade alongside bullets for each kit. We’re also going to go in reverse order from bottom to top. Just like last year, the grades are as follows:

While they are clustered in tiers, these are ranked from our favorites to least favorites in order.

I would love to know in what way this random assortment of squares that follow no lines or pattern whatsoever relates to a simple red brick pathway that follows a straight line through the streets of Boston. If they wanted to pay homage to the trail, in my opinion, it would be better to try and replicate the path like you said you’re trying to do here. Have a red line down the center of the shirt with two smaller flanking gray lines on the side. (I envision something slightly similar to the 2016/17 home shirt). In closing, this is the second time you’ve tried to draw meaning to a kit that isn’t there. Please New England, do better.

We had some room to really play with our name. We looked at Charlotte’s past, present and future and something that has been a constant since the mid 1800’s is gold, money. In 1835 Charlotte was approved to become the first branch of the US Mint to produce money. This because of gold being found in the region and cost of transporting it.
We know finance will be around for a while. So embracing that part of our city, we leaned into the idea of Mint City. Besides, there are about 30 cities who call themselves the Queen City. And it’s rare to find a Mint City.
So while not trying to change the wheel, we wanted to fortify the story of Charlotte. And that’s where Mint City came from.

So what we have here is not only a kit that’s well designed (mint is better as an accent color) with a fantastic collar and a killer looking badge, it’s also a kit dedicated to the fans. It’s a team that hasn’t played a single game in MLS yet, and they’re already making a shirt honoring their supporters. That’s admirable, and with a kit that looks this good, Charlotte fans should be excited for what’s to come.

The Best Away: Orlando City SC

This is a story of a club recognizing it has a problem, and looking to fix it. Let’s start by reminding ourselves of what Orlando City has trotted out in the past for away kits.

Well…at least they’re consistent? Clearly the white shirt with purple stripe thing was getting boring and if they rolled out another one it would surely end up in the D tier at best. Instead, we get a truly unique design that provides a great gradient and lots of color. There’s enough purple here to fill an episode of Barney & Friends, but the way it transitions to orange, then a pale yellow is great color blocking. Not to mention, how these colors play with the pattern on the shirt is really fantastic. Orlando can’t ever go back to the status quo again. Not after a great result like this.

The details on this shirt scream early 20th century Hollywood glitz and glamour and I’m here for it. I’m also a sucker for Art Deco and this kit manages to balance itself out with a bold design and colors that aren’t too harsh. Overall, an amazing design that I’d love to add to my collection one day.

Finally, here’s a look at our visual tier list:

Nets trade Harden to 76ers for Simmons, others: reports

Can You? Should You? – Talking About Men’s Health™

Questions To Ask Your Dentist Prior To Any Procedure

With continued dominance, Flames justifying excitement for playoffs in Calgary