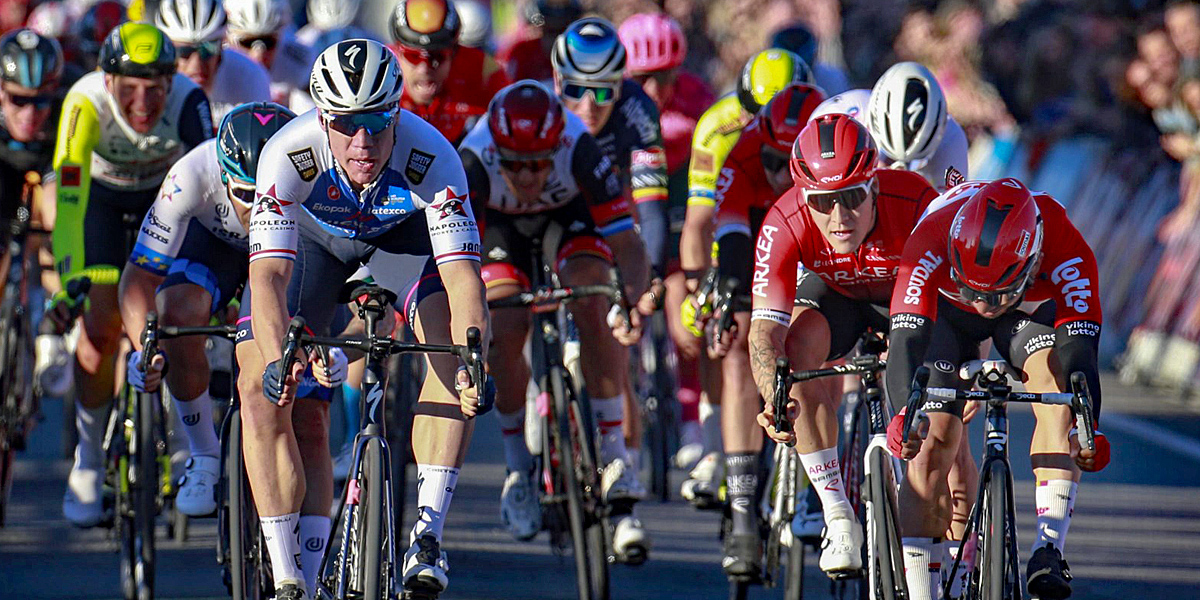 Race Report: After the disappointment for the Quick-Step Alpha Vinyls in the Omloop Het Nieuwsblad, Fabio Jakobsen swooped past the last break of the day with 50 metres to go for the win in Kuurne. Lotto Soudal managed to get second place ahead of Hugo Hofstetter, Daniel McLay and Giacomo Nizzolo.

Fabio Jakobsen won Kuurne-Brussels-Kuurne 2022. The Dutch leader of Quick-Step Alpha Vinyl was the first to finish in the streets of Kuurne after an entertaining race of 195 kilometres. The last escapees were only caught in the final metres, but after that Jakobsen was clearly faster than Caleb Ewan (Lotto Soudal) and Hugo Hofstetter (Arkéa-Samsic). 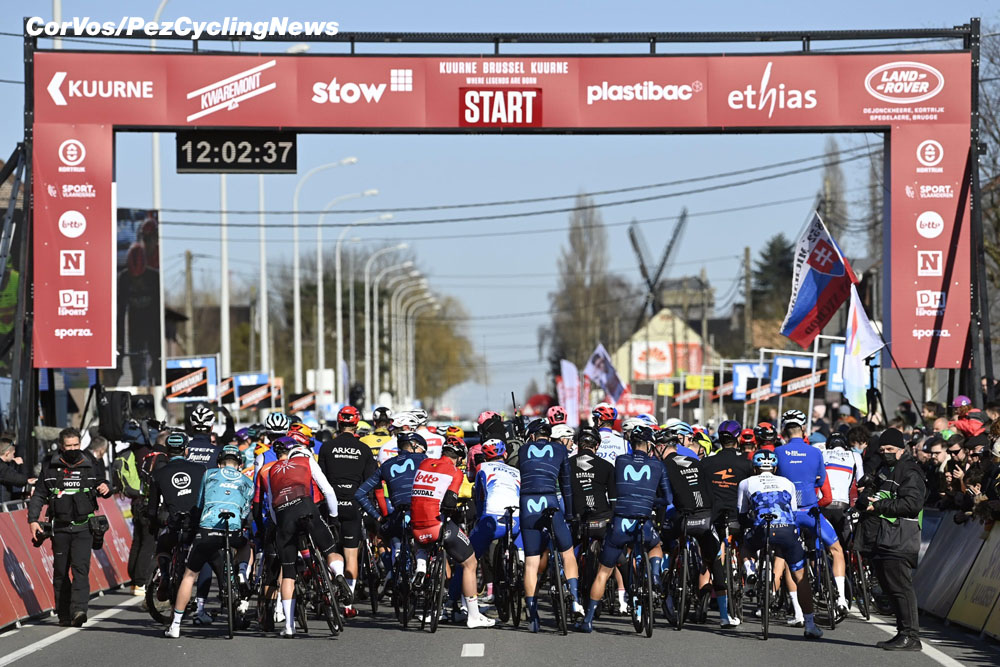 The route is a little different this year. The Oude Kwaremont is not included in the route this year as the race goes over less well-known climbs. In total, the riders will have to cross thirteen slopes. The first climb is the Tiegemberg and four more climbs in the Hainaut Ardennes. Before reaching the local lap in Kuurne, four more famous hills have to be climbed: the Kruisberg, Hotond, Côte de Trieu and Kluisberg. The top of the Trieu is more than 60 kilometres from the finish and the Kluisberg more than 50. The Beerbosstraat, 35 kilometres to go, is the last cobbled section and a significant obstacle before the finish. Then the race should go at a fast pace towards Kuurne, where the finish line is crossed after 181 kilometres before another local lap of about 15 kilometres through Kortrijk and Harelbeke. 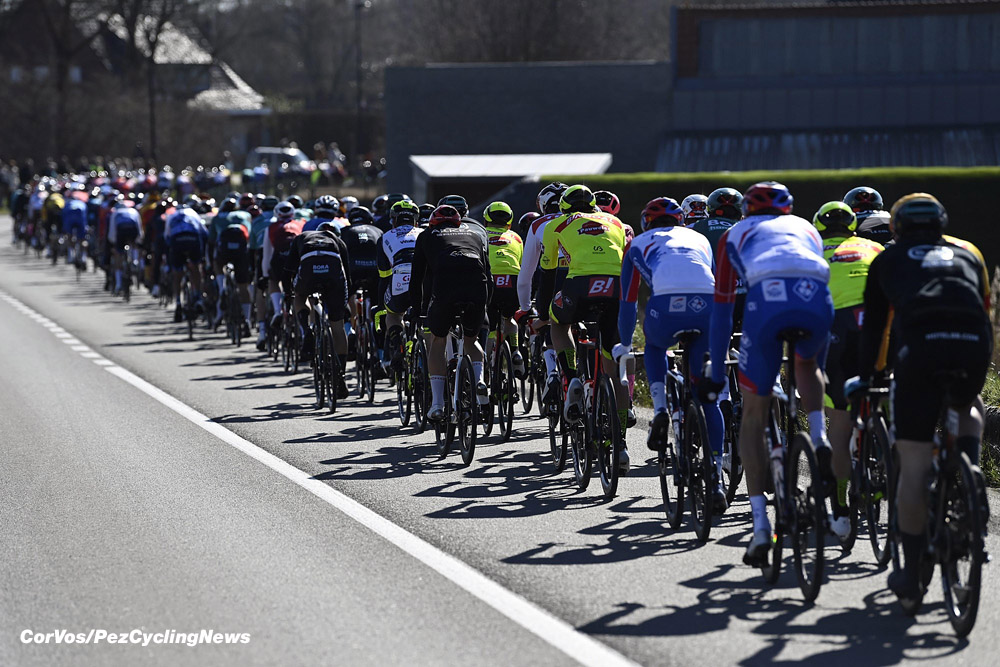 Another hard day in Flanders 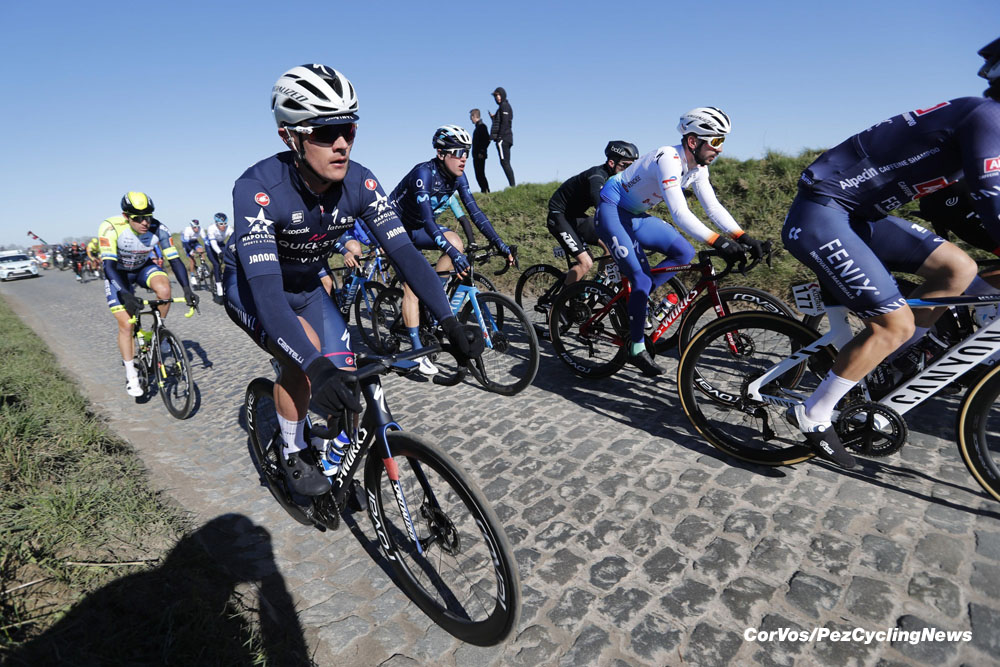 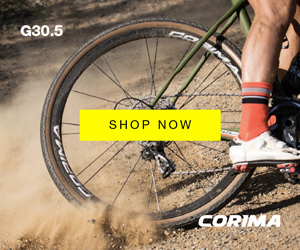 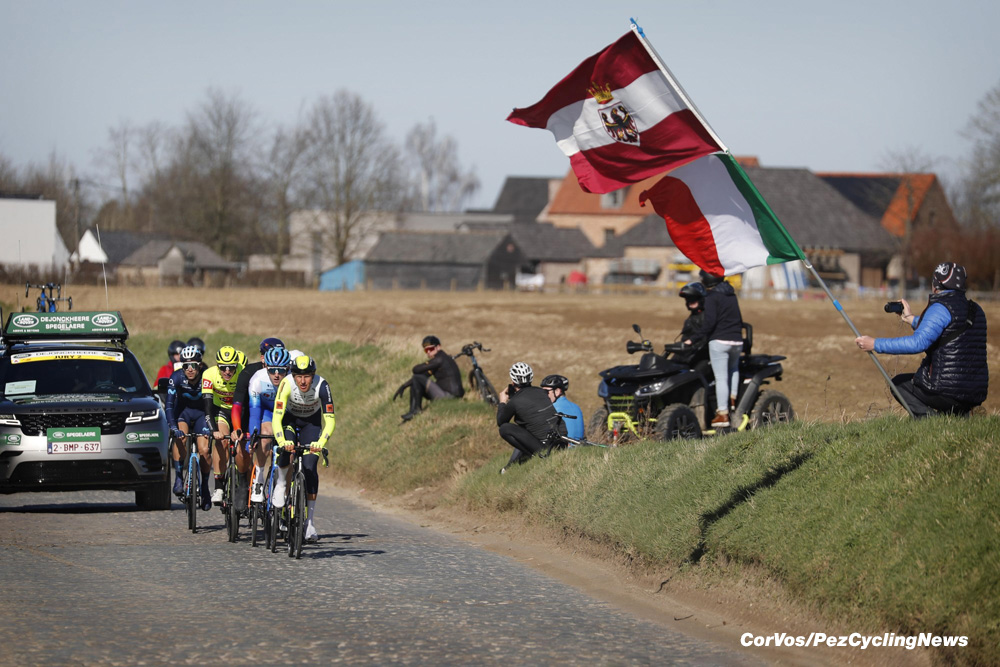 The break of the day

The lead of the seven didn’t get too big. The peloton, led by Quick-Step Alpha Vinyl, Lotto Soudal and the other sprint’s teams, did not allow the advantage to exceed 3 minutes. With just over 100 kilometres to go, the leading group grew to nine. EF Education-EasyPost sent Ben Healy and Julius van den Berg up the road to cross a gap of 2 minutes. Soon after Tietema and Krul were dropped. In the peloton things got serious, as INEOS Grenadiers started to close in on the leaders. 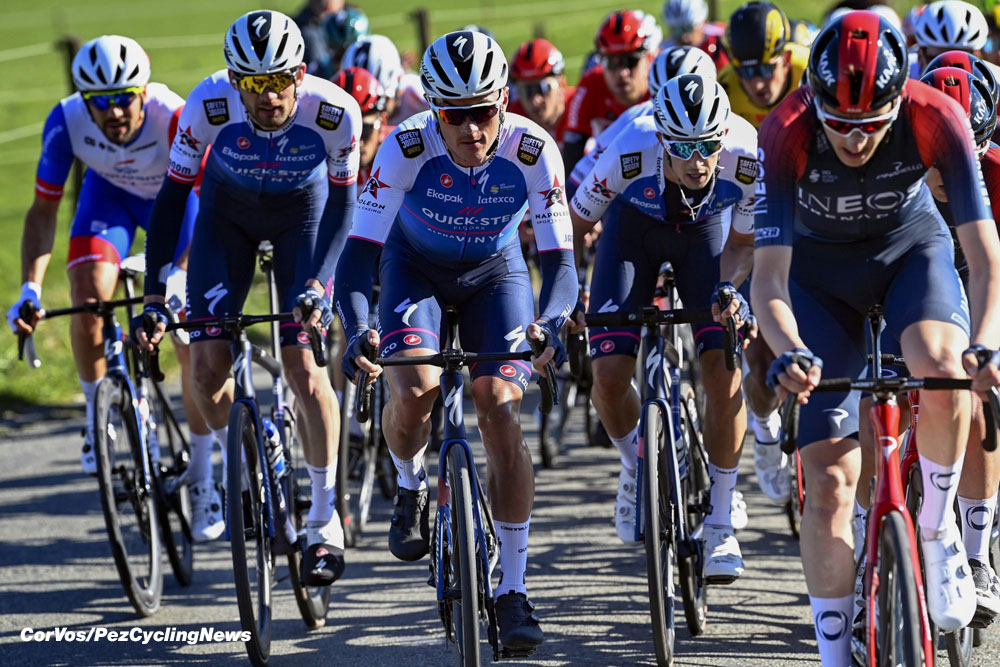 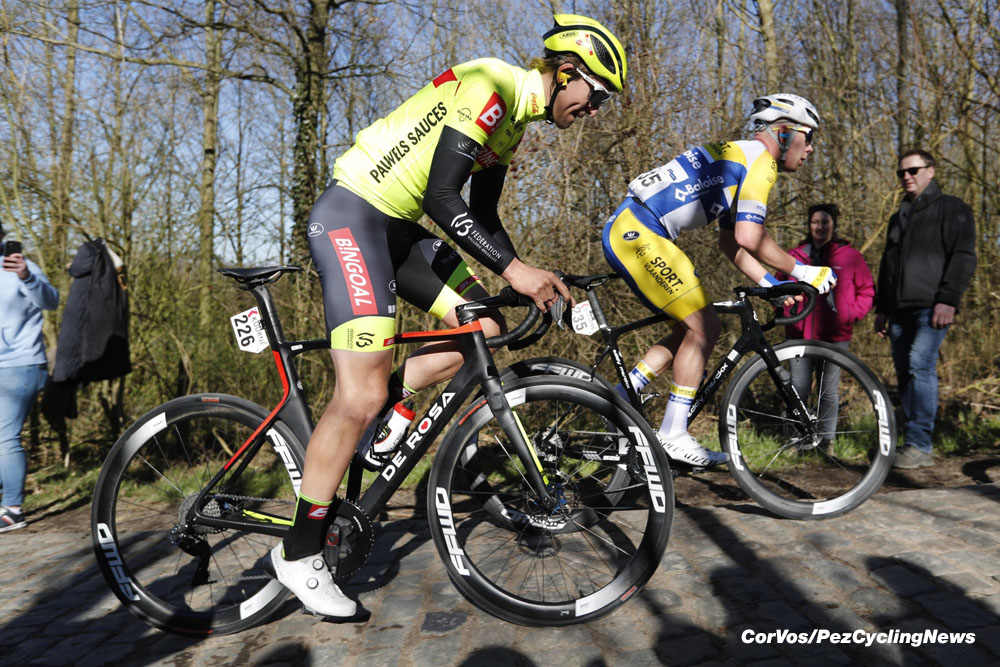 This chase didn’t go all the way, because the leading group – where Van der Hoorn, Van den Berg, Livyns, Mas and Durbridge were left – was given some more space. On Mont Saint-Laurent the peloton was split by an acceleration of Tom Pidcock and on the Kruisberg it was once again INEOS Grenadiers that took the initiative. 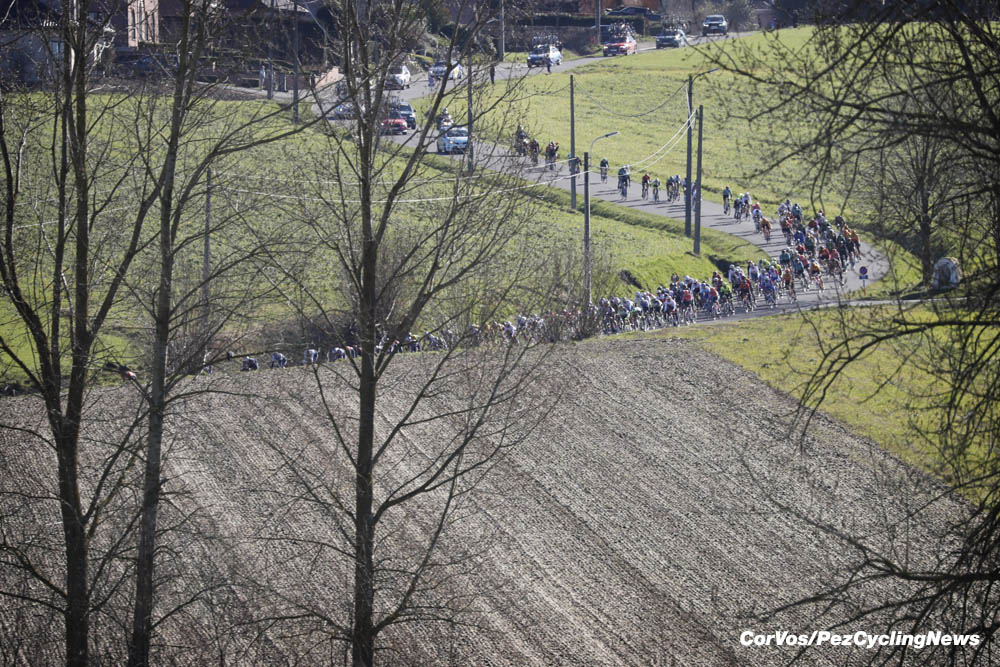 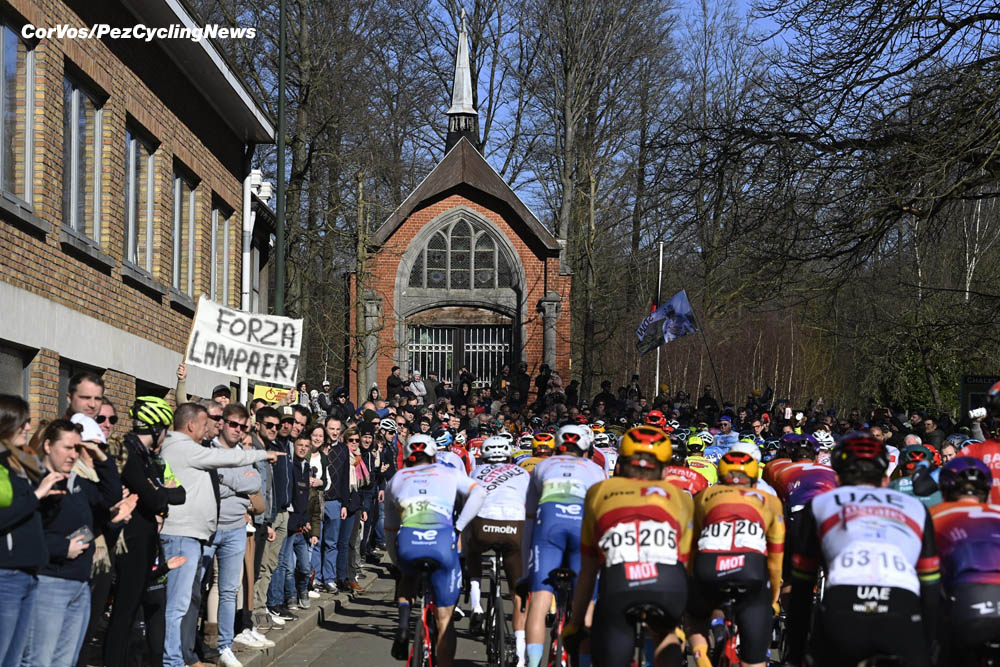 The fans were out

Quick-Step Alpha Vinyl then raced hard on the Hotond with Kasper Asgreen, causing the peloton to break up again. Sixty kilometres from the finish, Jumbo-Visma took over, with Tiesj Benoot’s attack on the Côte de Trieu. It turned out to be the start of a leading group of eighteen men who started the last 50 kilometres with a gap. 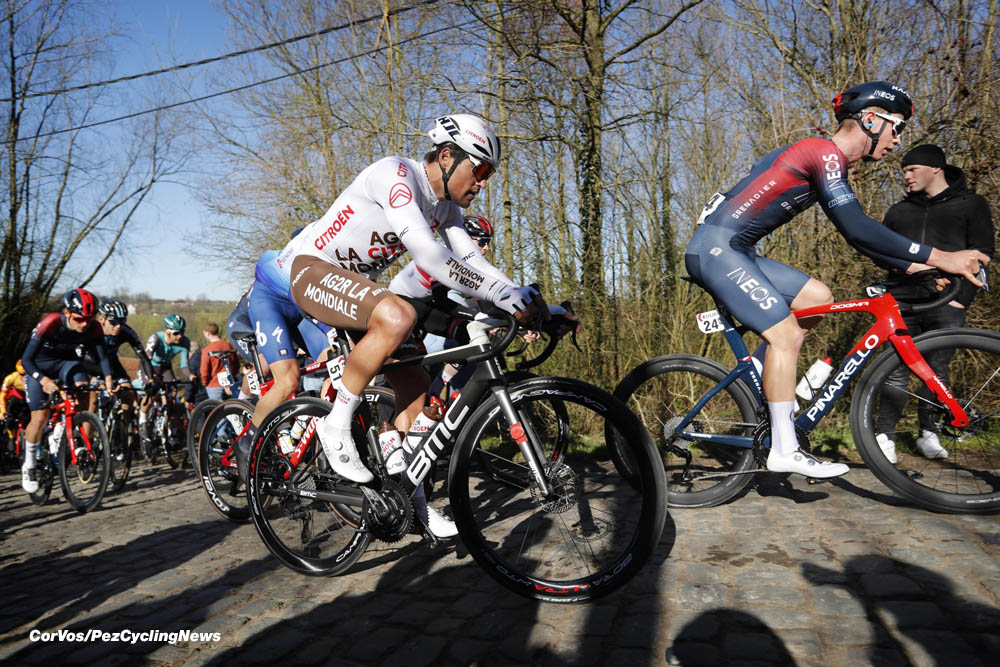 Van Avermaet 3rd in the Omloop 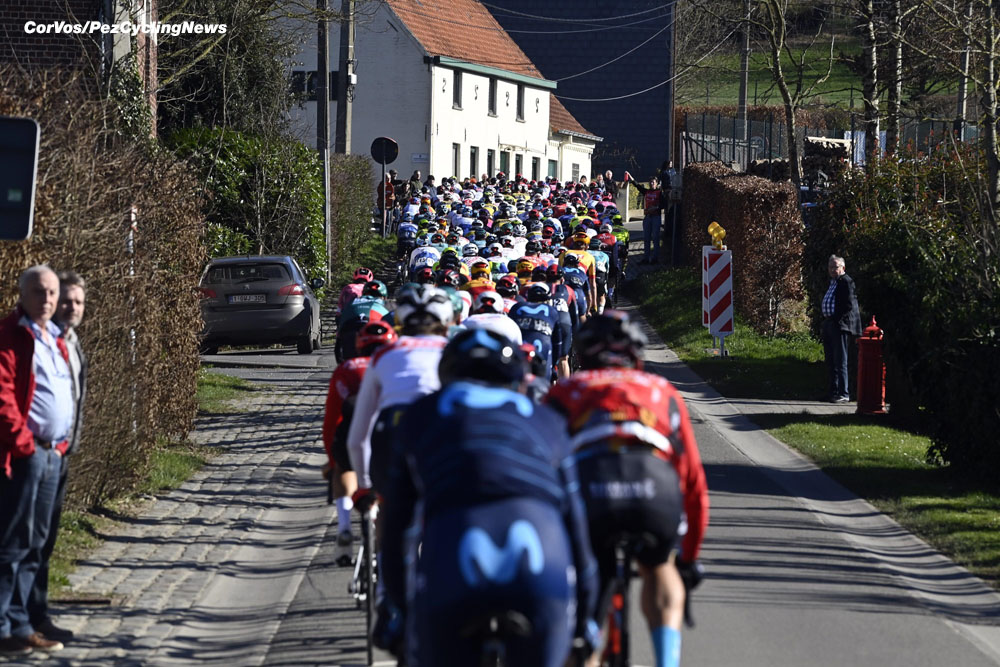 Thirteen climbs between Kuurne and Kuurne 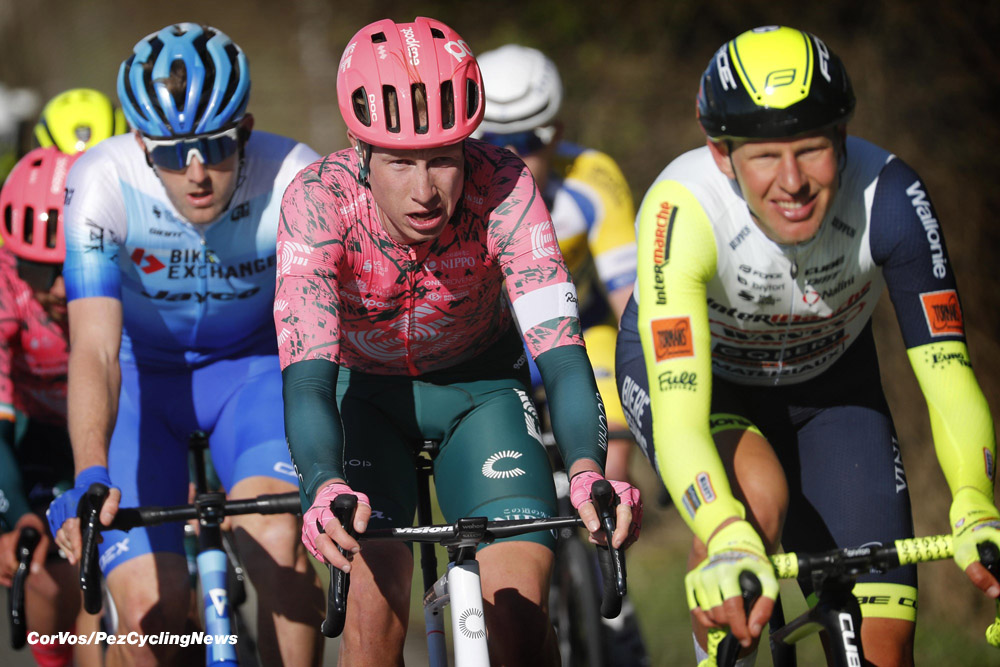 As expected, the early break would fail 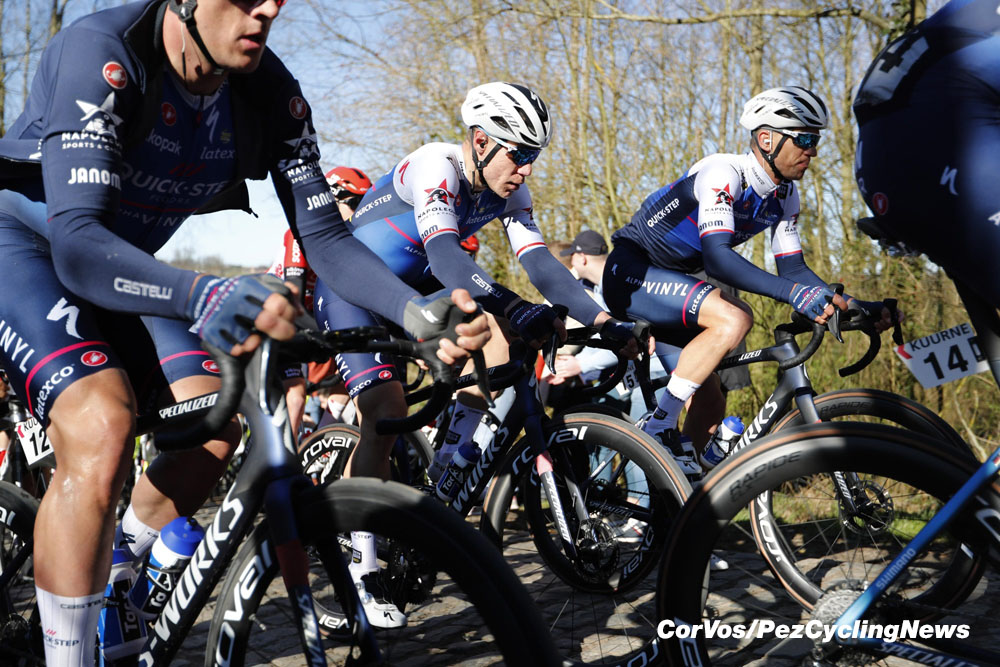 Jakobsen kept out of the wind all day

The cooperation at the front was not good and there was also a headwind. Part of the leading group was caught 33 kilometres from the line. Twelve others, including Trentin and Laporte held on. But the difference of 30 seconds was closed well before the finish. 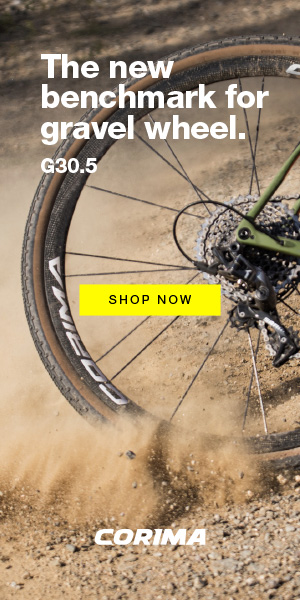 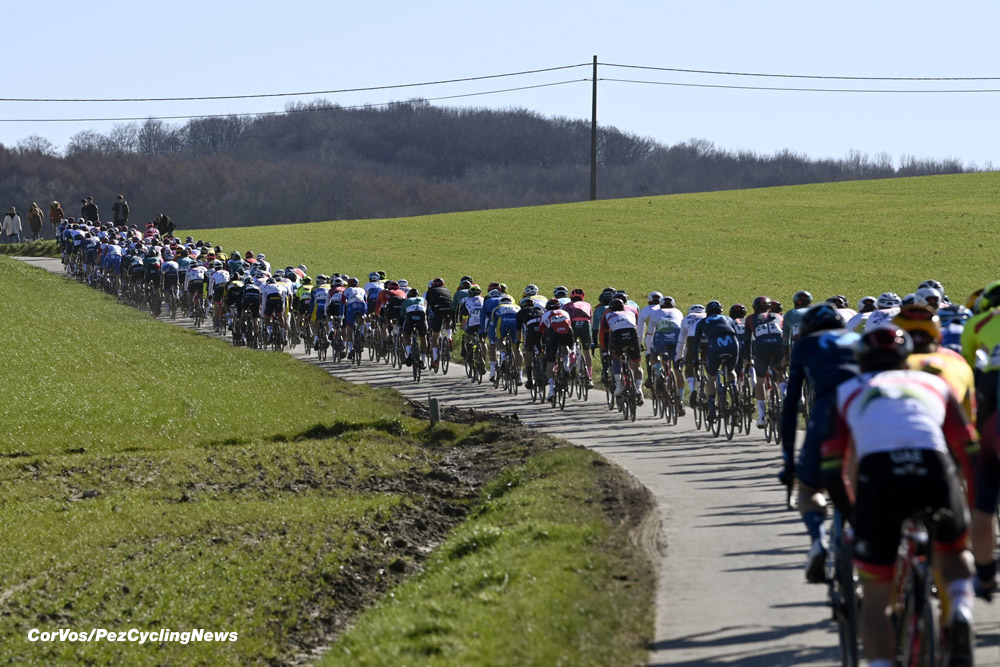 The peloton was under pressure all day 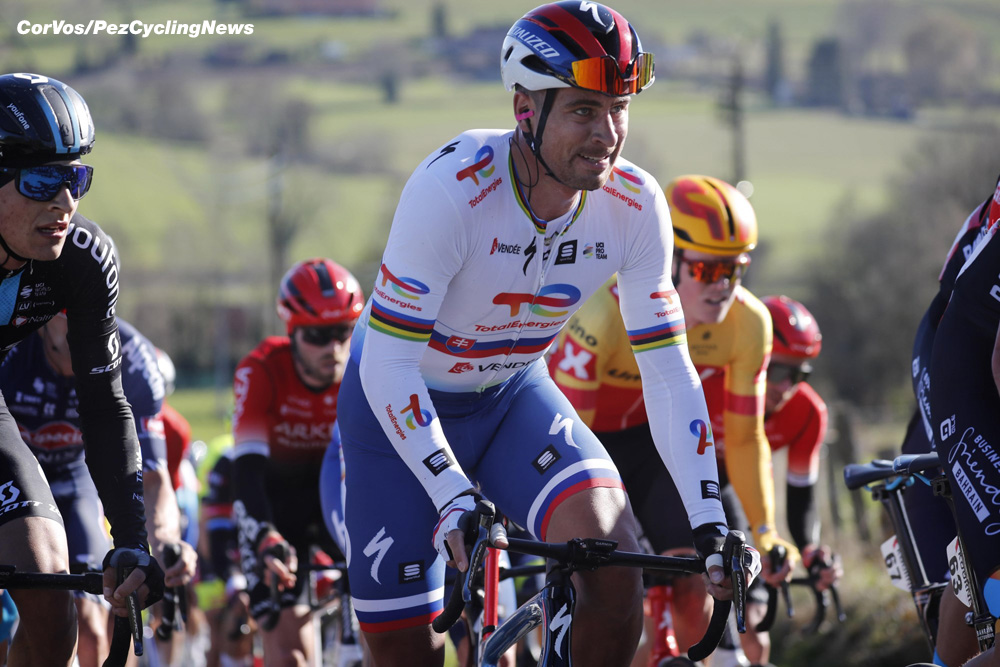 Laporte, Van der Hoorn and Narvaéz still pushed on. The lead was 15 seconds and then it fluctuated around 10 seconds until the last 3 kilometres. Quick-Step Alpha Vinyl meanwhile burnt up their men chasing, but they didn’t get any closer. Jumbo-Visma were disrupting the chase for Laporte. 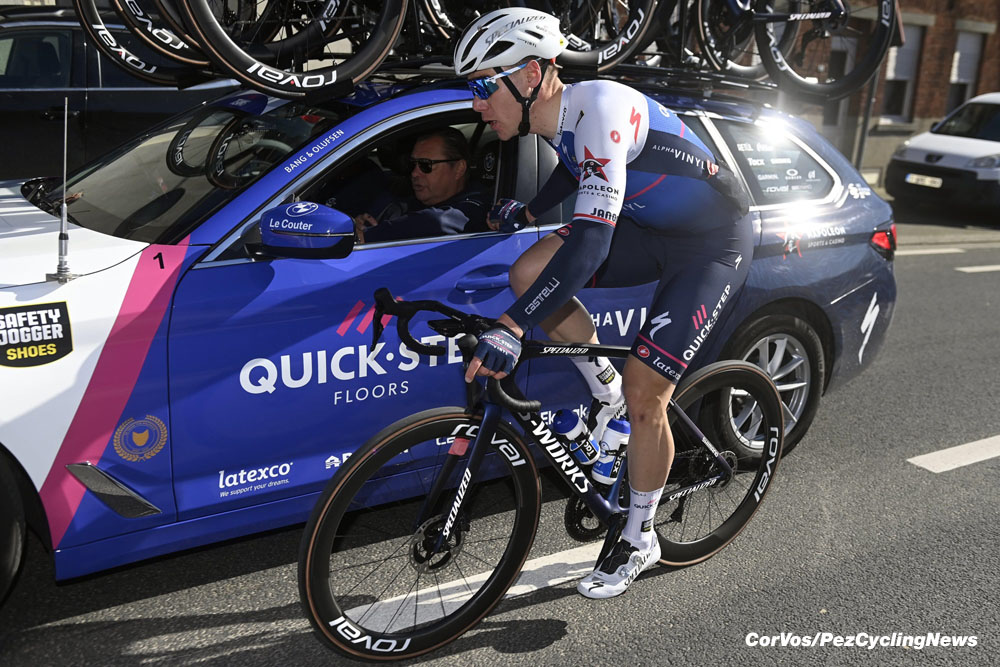 Quick-Step had a plan for Jakobsen 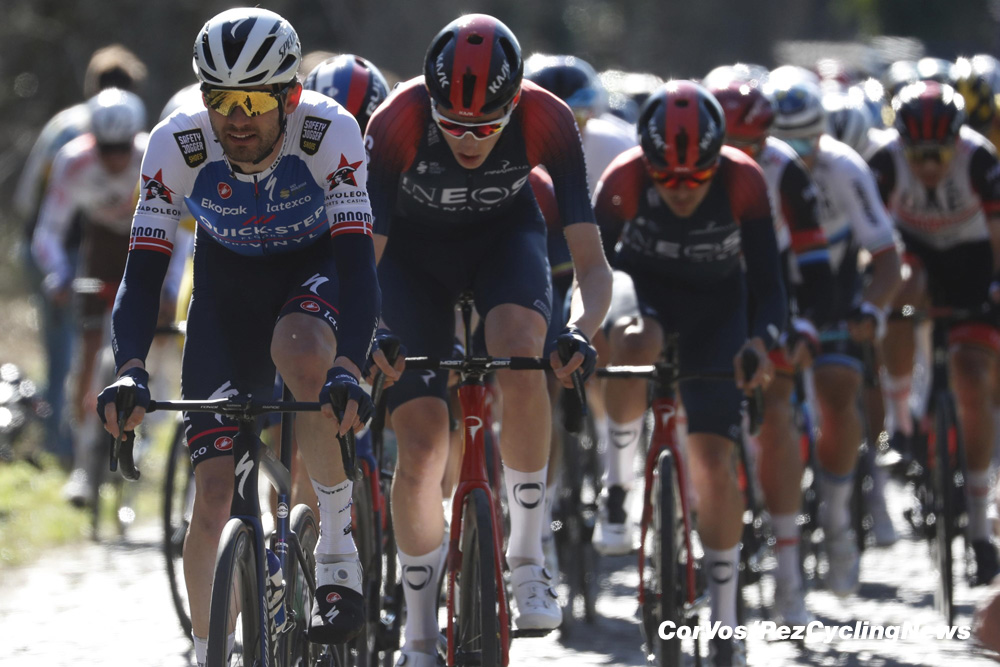 Under the banner for the last kilometre the lead was still 8 seconds, but an ultimate effort by the Trek-Segafredo men ensured that the peloton caught the break in the final straight. With a strong sprint, Fabio Jakobsen shot past the escapees, and also held off the fast finishing Caleb Ewan. Hugo Hofstetter sprinted to third place. 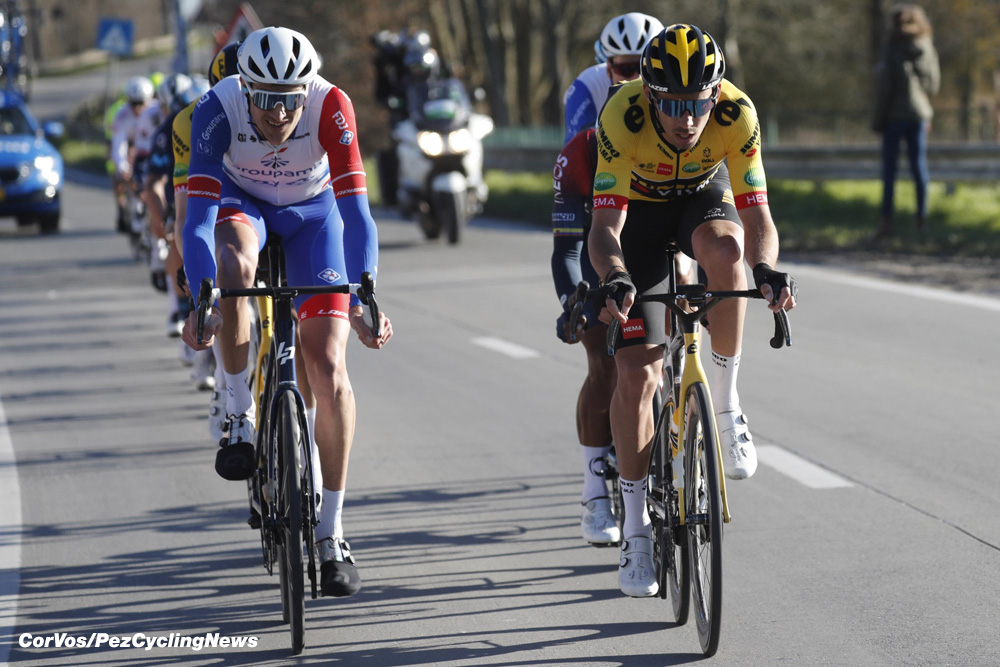 The last break was caught just before the line 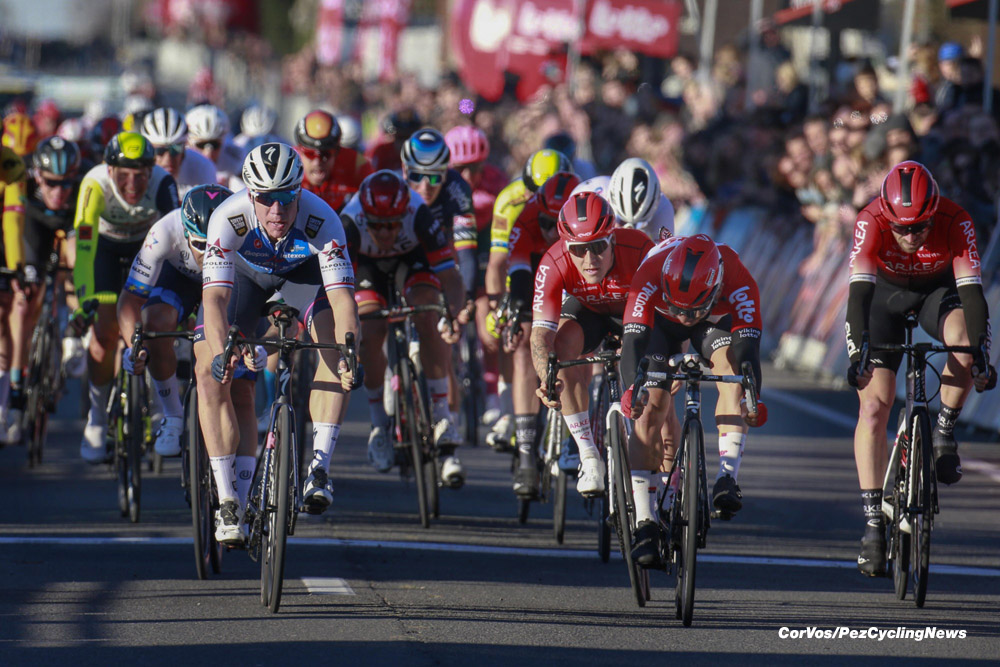 Ewan couldn’t get close to Jakobsen

Race winner, Fabio Jakobsen (Quick-Step-Alpha Vinyl): “I used those guys as my lead out. It wasn’t easy, not all day. It has not stopped in the last 100 kilometres. And I had to use everyone in my team to get close to winning. I used those three guys as lead out. I tried to ride into their slipstream and hoped to make it to the finish. I saw Ewan coming to my left and I felt he had speed, but I was able to jump a little earlier and win. You always have to sprint for the win. Because if they don’t make it, you can still win. You should always try. After rain comes sunshine. It’s not easy for me and my family. The fact that I can win here, and Kuurne is high on the list of sprinters, makes it super nice. But when I get off the bike here, I remember that we are all free in the Netherlands and Belgium. We are free and can watch the race. But I also think of Ukraine, of what is going on there. The war. That makes me very quiet and my thoughts are with those people.” 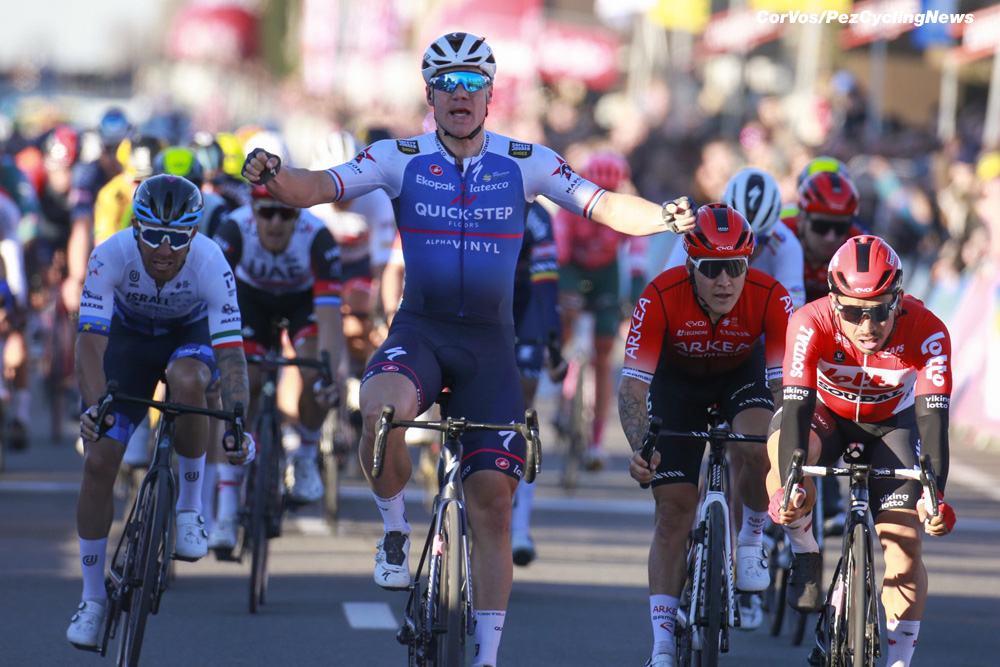 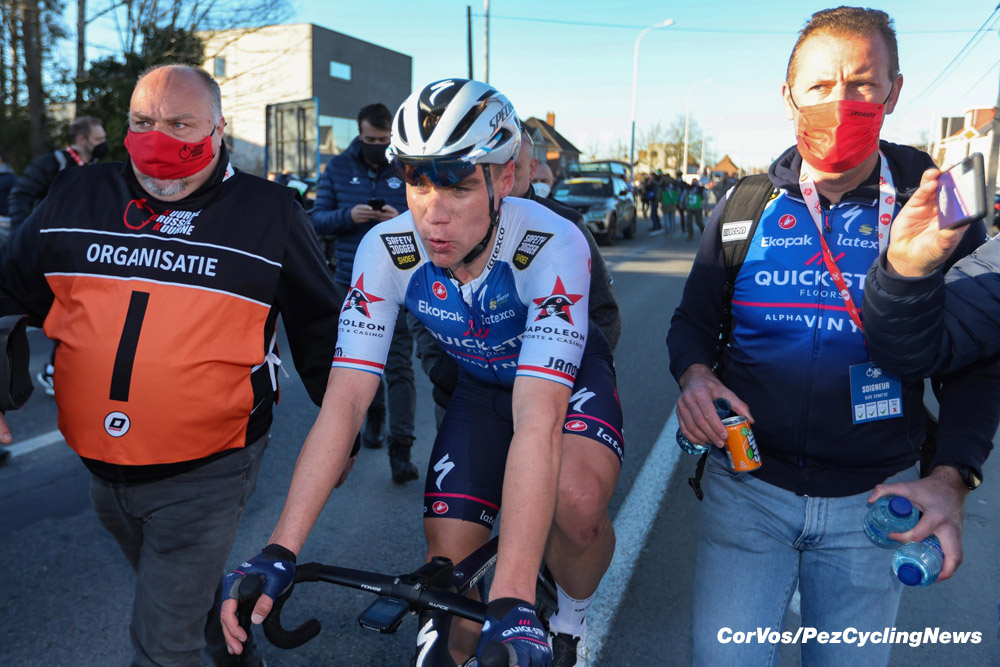 Great win for Jakobsen and Quick-Step

7 Simple Yoga Swing Poses for Beginners to Try at Home