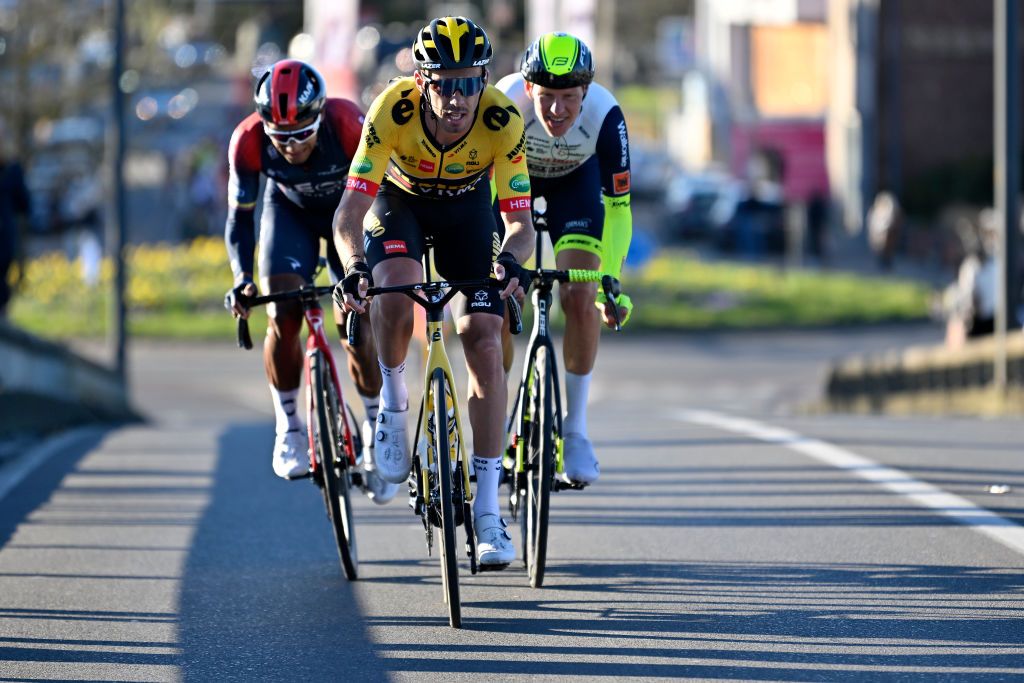 While Taco van der Hoorn may have prepared for his day in the break — and agonisingly late catch — at Kuurne-Brussel-Kuurne for months beforehand, for fellow breakmate, eighth-place finisher Christophe Laporte, the result, on his debut for Jumbo-Visma came with rather less preparation.

The Frenchman made the switch to the Dutch squad for 2022 in part to help Classics leader Wout van Aert through the spring. However, a COVID-19 infection in January saw his season debut delayed, meaning that, while Van Aert raced to victory at Omloop Het Nieuwsblad, Laporte missed him by a day — but still came close to securing an Opening Weekend double.

In the end, he, Van der Hoorn, and Jhonatan Narváez were caught within sight of the finish line — less than 50 metres — at the 195-kilometre race, with Fabio Jakobsen (QuickStep-AlphaVinyl) leading the charge as the sprinters prevailed.

“I believed in [the win],” Laporte said later after collecting a €2,500 prize on the podium for leading the race across the line on the first passage through the finish.

“I didn’t miss much, just a bit of success,” he added, alluding to his form. “I’ve just finished three weeks at altitude with the team. I was supposed to do Omloop but unfortunately, I had COVID-19 in January so that delayed my preparation.

“I arrived a week later for the camp, so I stayed longer, and I only came back on Friday. We decided to limit myself to Kuurne-Brussel-Kuurne. Anyway, Wout didn’t need me yesterday to win.”

Laporte, who has 21 wins on his palmarès, is far from a slouch in the sprint, but even he couldn’t hold off the fastmen at the finish in Kuurne on Sunday. He had, after all, been taking turns on the front of the breakaway group while the likes of Jakobsen and second-placed Caleb Ewan (Lotto Soudal) were afforded the luxury of sheltering in the peloton.

“With an extra guy, maybe… Well, that’s easy to say,” he said when asked about the strength of the break group he was part of.

“To win against Fabio Jakobsen and Caleb Ewan in a sprint, you know it’s difficult. We had a plan with the team. I like to be on the offensive, so I was in front. We had a lot of fun, even if we didn’t win today — we have nothing to be ashamed of.”

Despite the last-gasp disappointment of Laporte being caught so close to the finish, Jumbo-Visma can come away from Opening Weekend among the happier teams in the peloton — if not the most pleased of all with their weekend’s work.

Team leader Van Aert secured a dominant Omloop Het Nieuwsblad victory with no racing beforehand, after all, and the team’s new additions — Laporte, Tiesj Benoot, and Tosh van der Sande — did a fine job across the two races.

“We thought it was possible, but the real sprinters came really fast,” Jumbo-Visma coach Maarten Wynants said after the race. “It’s a pity. It would have been the cherry on the cake of the whole weekend and then it’s a perfect weekend. Now it’s a little bummer.

Wynants named Benoot in particular as “a little bit the missing link” for the team in the spring Classics, before noting that the team don’t compare themselves to any of their rivals, namely Classics powerhouse QuickStep-AlphaVinyl, who came away with the win at Kuurne.

“We can look ahead to the future with really good confidence, especially when you know it’s the first race for many of the guys coming from the mountains. It’s a big confidence boost.”

Practice Attunement to Feel Seen and Nurtured in Your Relationships?