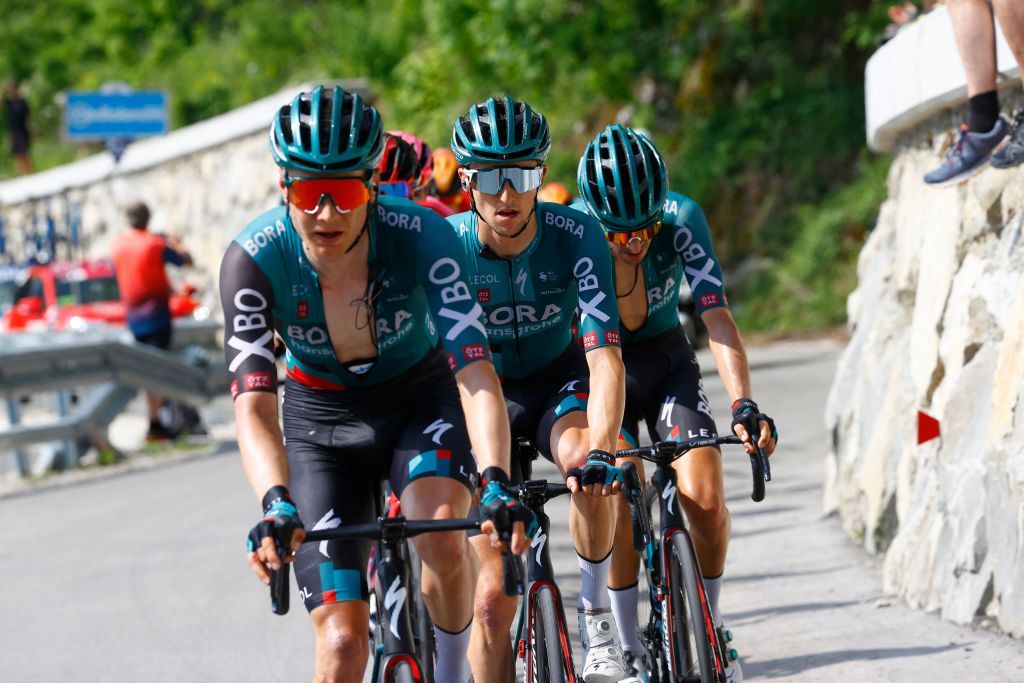 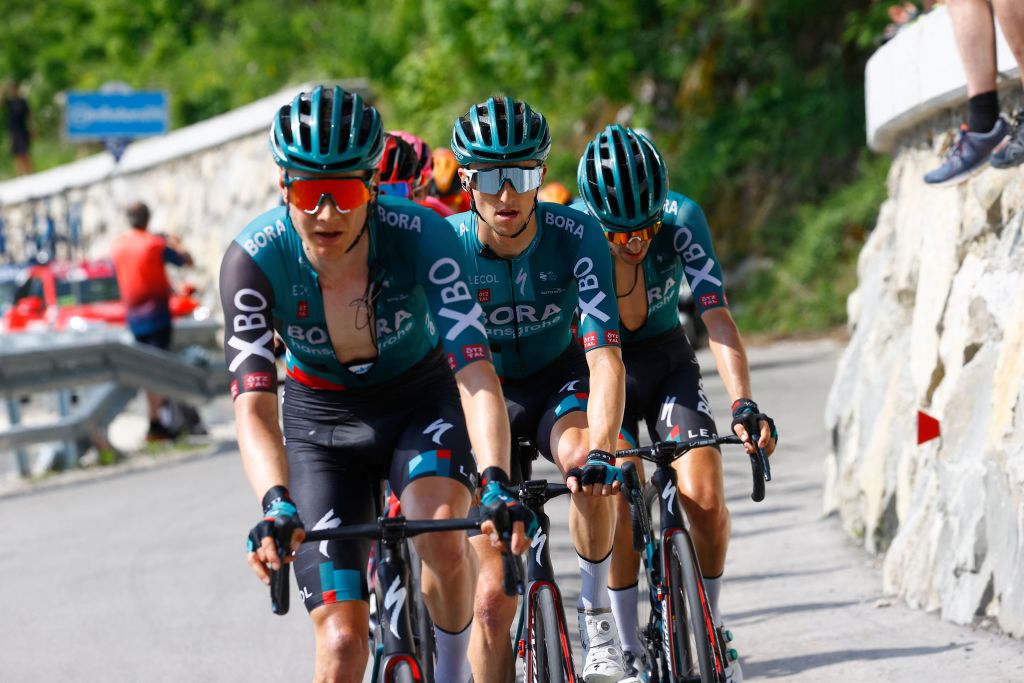 On the steep road up Kolovrat, things were getting ready to happen. Jai Hindley’s Bora-Hansgrohe team massed at the head of the pink jersey group. Richard Carapaz, suddenly short of Ineos teammates, parked himself vigilantly on Hindley’s rear wheel. A deadlocked Giro d’Italia was about to be prised open. But not yet.

The Bora-Hansgrohe forcing continued dutifully until the race climbed towards the Italo-Slovenian border, and they still led on the snaking descent that followed, but the pace relented abruptly once the road flattened out on the approach to the day’s final climb to Santuario di Castelmonte.

The pink jersey group swelled again to 25 or so riders, and Carapaz’s Ineos guard took their place on the front. Once the climbing began anew, the gradient and the pace whittled the group down all over again, but still nothing could separate Hindley and Carapaz on this Giro.

Carapaz accelerated forcefully with 2km to go, but Hindley responded promptly. Hindley placed a dig of his own and Carapaz parried smartly. The third man, Mikel Landa (Bahrain Victorious), briefly danced clear with a kilometre left, but the two leaders bridged smoothly across. Carapaz won the sprint for 8th on the stage, with Hindley (and Landa) parked behind him.

Another stalemate. With two days of the Giro left, Hindley still lies second overall, three seconds down. Carapaz’s maglia rosa remains as near and as far away as it did at the beginning. They’ll have to do it all over again on the Marmolada on Saturday. If that can’t decide the issue, then they face the penalty shoot-out of a 17.4km time trial in Verona on the final day.

“It was a pretty hard day again, the guys rode really well,” Hindley said when he paused beyond the finish line. “We tried to look for the opportunities out there, but it just didn’t work out the way we wanted to.

“Coming into that final climb, we knew it was going to be like a punchier finish which actually probably suits [Carapaz] a lot more than me to be honest. But yeah… I still tried to have a crack, but it was a hard finish.”

Hindley’s directeur sportif Enrico Gasparotto has, in his first Giro behind the steering wheel, already marked himself out as a formidable tactician by masterminding the team’s onslaught on the race’s most breathless day in Turin on stage 14. When the Friuli native revealed on Thursday that he had reconnoitered this stage into neighbouring Slovenia as long ago as last November, it seemed clear that Bora-Hansgrohe would seek to replicate their show of force in Piedmont last weekend.

Sure enough, Bora-Hansgrohe took up the reins from distance, and their prospects of troubling Carapaz rose further when Richie Porte, stricken by illness, was dropped and forced to abandon early on the stage. On the wickedly steep climb of Kolovrat, Ben Zwiehoff and Lennard Kämna refined the winnowing process still further, but Bora-Hansgrohe never succeeded in isolating Carapaz.

“It wasn’t an ideal stage to really put the hammer down, but we knew the second last climb was a real steep one and then the descent was going to be really technical and really tricky,” Hindley said. “We just wanted to hit it at the front and stay out of trouble.”

With the early break more than ten minutes up the road, the bonus seconds were already off the table. The onus was thus on Hindley to try to extricate himself from Carapaz on the 7km climb to the finish, but there was nothing to be done. Each man landed equivalent blows without leaving any lasting damage. The slender time gap remains unchanged, and a boxing judge would have had to score this round as a draw.

“We let the gap go out a bit too far, but the initial plan today wasn’t to go chasing the break anyway. We just changed the dial on the road,” Hindley said. “There’s a tough day coming up tomorrow and I think that will be the big decider, so we’ll see how it goes.”

On Saturday, the final road stage of the Giro brings the race over the Passo San Pellegrino, the Passo Pordoi and the mammoth Passo di Fedaia, which returns to the race after an eleven-year absence. In principle, the climb beneath the Marmolada ought to be demanding enough to decide the issue, but then nothing has separated Hindley and Carapaz in the mountains of this Giro thus far.

Hindley, the weaker time triallist of the two by pedigree, surely needs to claw back at least some time in the Dolomites if he is to win the race in the short, final test in Verona. The Australian knows the heartache, of course, of starting the final time trial in pink only to concede the garment at the last. For all Gasparotto’s confidence in his time trialling, the onus is on Hindley to try to force the issue one last time on stage 20.

“Definitely, that would be a dream scenario, to try to get some time tomorrow and try to get a buffer before the TT,” Hindley said. “It’s not going to be easy, but I reckon we’ll be up for it.”

Sutter on whoever is playing Avalanche in the 1st round: ‘A waste of eight...

Stay Lean Without Tracking Calories or Macros in 4 Easy Steps

How to Stay Body Positive in a Body Negative World