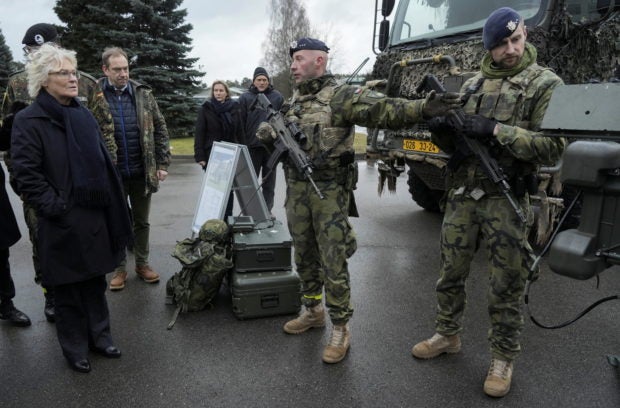 In an interview with the Funke media group to be published online on Sunday and in newspapers on Monday, Lambrecht said Germany was “already making an important contribution in Lithuania” by leading a NATO battlegroup.

“As a matter of principle, additional troops are available as reinforcement, and we are in talks with Lithuania at the moment to find out what exactly would make sense in this regard,” she said.

Russia has denied planning to invade Ukraine but has tens of thousands of troops near its neighbor’s borders, prompting the United States to order about 3,000 extra troops to bolster NATO’s eastern flank in Poland and Romania.

The first of these U.S. troops arrived on Saturday at Rzeszow military base in southeastern Poland.

NATO has already deployed four multinational combat units with some 5,000 troops in total in Poland, Lithuania, Latvia and Estonia. They were sent there in response to Moscow’s annexation of the Crimea region from Ukraine in 2014.

These so-called NATO battlegroups, led by the United States, Germany, Canada and Britain, are meant to stall an attack in the region and buy time for additional NATO troops to reach the frontline.

Two U.S. officials said on Saturday that Russia has in place about 70% of the combat power it believes it would need for a full-scale invasion of Ukraine.

Lambrecht again ruled out supplying Kyiv with arms, after Ukraine’s embassy in Germany sent a list with specific requests to the foreign and defense ministries in Berlin.

4 Tips to Keep Your Marriage Healthy