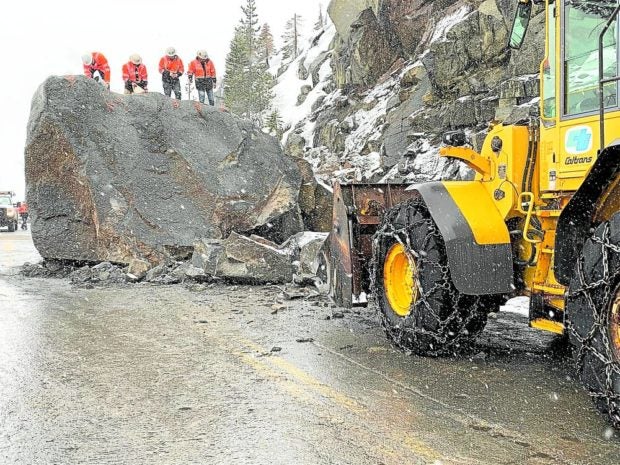 SOLID HIT A big boulder blocks US Route 50 at Echo Summit near Lake Tahoe, California, on March 4. For hours it stopped traffic—and gained an internet following—before being removed. —AFP

LOS ANGELES — A massive boulder that crashed down onto a California road, blocking traffic for hours as it garnered a healthy internet following, was blasted to pieces Friday.

The hulking great rock stopped traffic around Lake Tahoe after it tumbled onto the highway on Thursday evening.

California’s Department of Transport (Caltrans) swung into action, with crews dwarfed by the obstacle they had been sent to shift. The department also launched #Boulderwatch on social media accounts, offering followers on Twitter regular — if slightly tongue-in-cheek — updates, photos, and videos of the operation to clear Highway 50 at Echo Summit in California’s mountainous north.

Workmen in high-viz kit drilled holes in the monster rock and then stuffed dynamite inside before retiring to a safe distance and watching the resulting explosion.

Footage shows the boulder fragmenting in a cloud of dust and smoke before heavy earth-moving machines ultimately began carting the debris away.

“@CalTransDist3 wants to ensure the public no roadrunners or coyotes were injured & Wile E. Coyote was not responsible for this boulder falling onto the highway. He is innocent this time,” the department quipped on Twitter.

The road, which runs through mountainous national forest and links ski fields, was expected to be opened later Friday afternoon, the agency said.

Is it time to ignore ‘best before’?

Midlife Insomnia Can Manifest As Cognitive Problems In Retirement Age

Cycling: How Not to Miss a Workout Even in the Heat

Man convicted in London for stalking US Open champion Raducanu