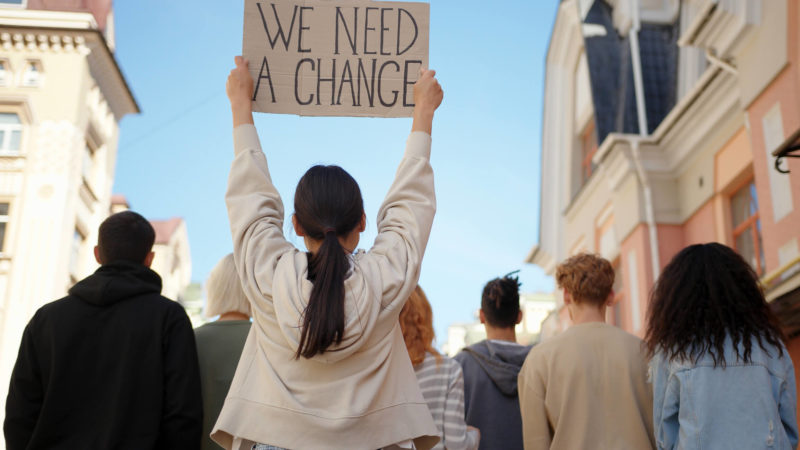 Student activists are positioned on the front lines of almost every social and political movement. They generate conversations, push boundaries, demand action, facilitate change, challenge bureaucracies, and engage in many other forms of social influence. This intentional, or even unintentional, leap into the heavy work of activism has the potential to cause lasting emotional fatigue, exacerbated anxiety, and even interrupt a college students’ ability to safely navigate through their college experience. Therefore, it is important for therapists and educators to be aware of the work college students are doing and provide empathetic space for them to rest and grow.

In order to understand the impact that activism and calls for national and international justice have had on mental health, it is vital to first consider historical contexts:

Multiple factors influenced this protest; however, most notably, this student-run protest was centered on a felt sense of governmental injustice, a disagreement with the draft the United States involvement in the Vietnam War (More Information on University Uprising).

Three million gallons of oil leaked into the ocean, which resulted in the death of 9,000 birds and other animals. This event sparked student protests for environmental and climate policies and later became the catalyst for the naming of Earth Day (More Information on Santa Barbara Oil Spill).

Noted as the quantitative beginning of more public displays of activism that centered LGBTQIA+ issues. However, students were also protesting homophobic policies on universities before 1969 (More Information on LGBT+ Protests).

Started by students in Soweto, South Africa, these protests objected to the system of apartheid (More Information on Apartheid Divestment).

Emma Sulkowicz (a student at Columbia University) carried her dorm mattress on her back to protest the university’s failure to expel her rapist (More Information on Mattress Protest).

What we know about mental health has drastically changed over the last fourteen months as a result of Covid-19. Many of us were forced to quarantine ourselves, limit in-person engagement with others, and tragically thousands of people across the globe were forced to navigate sick and dying loved ones. The JED Foundation, a non-profit organization that works with emotional health and suicide prevention with teens and young adults, collected relevant data in 2020 on college students and their emotional readiness for college. The data from The JED Foundations shows some important trends:

These striking numbers tell us that people are quite literally fighting for their emotional, and in some cases physical, lives. It may also feel hopeless to look at statistics like these. However, I would argue that these findings provide us with a unique opportunity to show up for people that we know or don’t know yet.

When considering the intersection of mental health and student activism, the emotional exhaustion is only compounded that much more. Not only are student activists navigating the emotional turbulence of the last years, but they are also navigating their own identities and the violence being perpetrated against them. For example, students of minoritized identities do not have the option to “take a break” from activism, because in many ways they are being forced to organize for their lives and right to simply exist.

So, what exactly can we as professionals do to better support these student activists? First, I want to note that I do not have all the answers (or even a fraction of them). However, I do believe the learned skill of empathy and story collecting is how people (in particular, people who hold privileged identities) can unlearn and reshape their views of the world.

I would first like to acknowledge that I do not think that empathy learning or the ability to truly hear a story are the singular tools for people in positions of power or privilege to use when supporting the needs of student activists. Instead, I would argue that empathy is the prerequisite for educators, administrators, mental health professionals, and therapists to even begin to do the work of supporting students.

Empathy is a learned behavior. Many people often state that some people are born more empathetic than others. However, empathy is instead a practice that can be learned. Here are the four key elements of empathy:

1. Perspective-Taking (or Putting Yourself in someone else’s shoes)

This element is challenging for a lot of people because it requires intentionality and an active emotional adjustment to consider a concept that may seem unrecognizable. Perspective-taking does not require that you yourself have experienced the same experience as the other person; instead, it only asks you to find the common thread of emotion that you can pull on while listening to the other person’s story.

2. Staying out of Judgment and Listening

This component of empathy asks us to truly listen to what a person is saying. Listen with the goal of understanding as oppose to the responding or criticizing.

3. Recognizing Emotion in Another Person That You May Have Felt Before

Similarly, to perspective-taking, this step in empathy asks us to search our soul for common emotions that we can pull on when engaging with another person who may have different lived experiences than we do. For example, when I worked in a therapeutic space with clients who voted for Trump and felt hurt that their friends and connections were disowning them because of their vote, I had to search for a common thread between us. I strongly detested Donald Trump; however, I do know the feeling of exclusion, and thus I allowed that to be the key that opened the door for future engagement.

4. Communicating That You Can Recognize That Emotion

Arguably the most important part of empathy training is the tracking of the story you are heading by naming that the emotion being expressed is real, valid, and to be unquestioned. Telling someone, especially student activists, that they are “too emotional,” or “responding incorrectly” further gaslights the experiences of students who are screaming for their rights.

Learning the empathy skillset and being open the hearing the stories of those who are different from you is not the solution. Storytelling is only the first step in how we begin to stitch a new story into all of our lives. By not taking the opportunity to hear stories and experiences that are different from our own, we do a great disservice to our own souls’ ability to grow and evolve into something better. Poet, humanitarian, and social justice activist Sonya Renee Taylor said it best when she said, “We will not go back to normal. Normal never was. Our pre-corona existence was never normal other than we normalized greed, inequity, exhaustion, depletion, extraction, disconnection, confusion, rage, hoarding, hate, and lack. We should not long to return, My friends. We are being given the opportunity to stitch a new garment. One that fits all of humanity and nature.”

I believe that we begin to recraft our futures by holding ourselves responsible for being better story collectors for student activists. They are the seeds that have been sown to gown our world into a place that gives rise to voices who have been told throughout their entire generational histories that their stories do not belong. It’s time for all of us to welcome more stories into our own individual worlds.

Do Our Kids Need Social Emotional Learning in School?