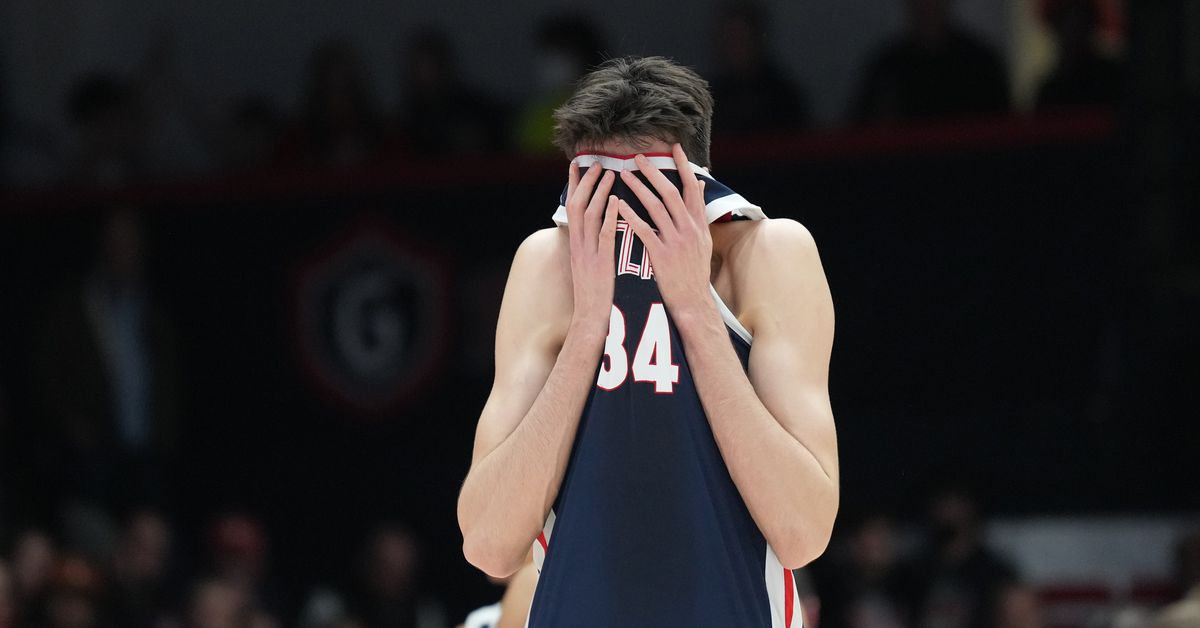 The Super Bowl is over, the NBA and NHL playoffs are a little less than two months away, and baseball’s owners have locked out the players and already compromised a full season. That means it’s time for college basketball’s turn in the spotlight with the start of the NCAA tournament barreling toward us in just two weeks.

There was no better precursor for March Madness than Saturday’s slate of games on the men’s side. Seven of the top-10 teams in the AP Poll lost, including No. 1 through No. 6. It’s the most top-10 teams to ever lose in a single day. If the elite tier of national championship contenders were starting to get comfortable, an unprecedented day of upsets should serve as a wakeup call.

This feels like a year where the top teams in the country are a step ahead of the rest of the field, but clearly no one is unbeatable. Here’s a look at the shortcomings of the top six teams in the polls before March Madness kicks into overdrive.

Gonzaga needs to prove it can handle more physical opponents inside

Gonzaga lost so many pieces from last year’s team that was one win away from becoming an undefeated national champion, but this still might be the best team in the country. The case for the Zags remains strong even after Saturday’s upset loss at No. 23 Saint Mary’s, however the game did add another piece of evidence to a potentially troubling trend. When Gonzaga’s beautiful brand of basketball meets a team that wants to slow the game down and grind out possessions inside, can they can the increased physicality inside?

The Gaels tried to limit Gonzaga’s shooters even if it meant letting star junior center Drew Timme face single coverage inside. It worked: Timme shot 2-of-10 from the field, and the Zags didn’t get off many clean looks from deep (5-of-15 on the night). Saint Mary’s also found some success posting up freshman phenom Chet Holmgren. While Holmgren typically plays much more physically than his ultra thin frame would suggest, there have been times we’ve seen him struggle to absorb blows from more powerful players, like when fellow freshman phenom Paolo Banchero bodied him at the rim in a close loss to Duke early in the season.

Holmgren is a current and future stud, but he hasn’t been in position to takeover games offensively much this season. Timme is one of the very best players in America, but the Zags struggle when he struggles. With so many of the best teams in the country boasting hulking interior scorers, Gonzaga better figure out a way a way to win when the opponent tries to punch them in the mouth.

Arizona needs to maximize its open looks from three

Arizona’s climb from outside the preseason top-25 to a potential No. 1 seed in the NCAA tournament has been one of the most pleasant surprises of the season. The Wildcats play a throwback lineup with two traditional centers in Azuolas Tubelis and Christian Koloko, which has helped them become one of the country’s most efficient teams at two-point scoring. The twin towers look should mean plenty kickouts to Arizona’s shooters around the arc, but in the games the Wildcats have lost, the threes haven’t been falling. That was the case in their upset loss to Colorado, where Arizona went 5-of-18 from three.

Only 36.2 percent of Arizona’s shots come from three, which ranks just No. 218 in the country. Arizona knocks down 34.4 percent of their outside shots, which ranks No. 131 in America. The Wildcats simply prefer to pound the ball inside rather than relying on threes, but they at least need to capitalize on their open shots when the defense collapses in the paint.

The starting backcourt of Kerr Kriisa (35.2 percent from deep) and Ben Mathurin (37.7 percent) gives Arizona two good shooters. Mathurin in particular is capable of catching fire, and if it happens in the tournament, Arizona can win the title. It will be important to get at least one other shooter going — Pelle Larsson off the bench? — to give Arizona the outside complement it needs to its dominant inside game. We’d also like to see the Wildcats get a little more rim pressure from their guards — Kriisa has only attempted 12 shots at the rim all season, per Bart Torvik — and find more scoring from the bench.

Auburn’s guard play is an issue

The SEC media poll had Auburn ranked No. 5 in the conference during the preseason, but instead they’ve been a top-five team in the country most of the year. The Tigers have two dominant big men in Walker Kessler and potential top NBA draft pick Jabari Smith, but they’re held back a bit by a lack of shot creation from their guards.

Wendell Green Jr. has hit some big shots for Auburn throughout the season, but he’s also prone to poor shot selection and is now only shooting 31 percent from three. Green has a sky-high assist rate of 34 percent (No. 25 in America), but too often it feels like the offense depends on him making something happen, especially given that Smith still struggles to score off the bounce.

Getting Allen Flanigan going would be huge for Auburn heading into March, but mostly they need Green play more within himself and improve his efficiency.

The Boilermakers have the No. 1 offense in the country this year, but they rank just No. 107 on defense. The trick for head coach Matt Painter is finding lineups that maximize his team’s offensive ceiling without getting torched defensively. It’s no small task.

Painter has been bringing Trevion Williams off the bench, staggering his minutes with star center Zach Edey. This is in contrast to a team like Arizona that has played its two front court stars together all year. While getting more shooting on the floor has been made the offense pop, Purdue simply doesn’t have enough two-way players on the roster to do it and still hold their own defensively. Whether it’s giving freshman forward Caleb Furst more minutes or trying to pair the star bigs together at times, it feels like Painter needs to do something, because this defense hasn’t been able to stop anyone all season. With three blue players (the two bigs + superstar guard Jaden Ivey), the Boilermakers simply have too much talent to go out early because they can’t get stops.

Kansas needs a solution for its point guard problems

Kansas has two dynamite scorers on the wing in Ochai Agbaji and Christian Braun, but there’s often a question of who will step up as the third scorer. While Jalen Wilson started playing better ball in February, the Jayhawks can’t afford him to have an off-night, because they already know they’re not getting much scoring out of the point guard position. At least that’s been the case when Dajuan Harris is in the lineup.

Harris is only averaging 5.5 points per game in 30 minutes per night, though he does provide tough defense and quick ball movement. The wildcard for KU is Arizona State transfer Remy Martin. Martin has been battling injuries lately, but he has a track record of providing three-point shooting and scoring punch. Finding another bucket-getter next to Agbaji and Braun would make Kansas a much more popular Final Four pick.

We’re also a little worried about a defense that ranks just No. 34 in the country. Kansas needs Davis McCormack playing at a high level on defense and staying out of foul trouble.

Kentucky has a tendency to settle for mid-range jumpers

John Calipari went all-in on transfers this year, and it’s helped Kentucky fully bounce back from a disappointing campaign last season. While the team building approach is different, it does still feel like a classic Calipari team in many ways. Mostly: the Wildcats are the top offensive rebounding team in the country, and they still don’t shoot many threes. Only 23.7 percent of the Wildcats’ shots are from three-point range, which ranked No. 338 in the country.

It’s hard to take issue with the No. 3 offense in the country, but it does feel like Kentucky has a propensity to settle for mid-range shots a little too readily. Freshman guard Tyty Washington Jr. is incredibly good in the second level of the floor — making 50 percent of his long twos, per Bart Tovik — but Sahvir Wheeler, Keion Brooks, Davion Mintz, and Jacob Toppin all take a decent amount of shots from long mid-range while shooting below 40 percent.

Kentucky has proven in the past an all offensive rebound offense can work, and no one is better at it than Oscar Tshiebwe. Finding some easier offense could be a nice boost going into March, though.

Common Cause of Fatigue and Lack of Focus in College Students