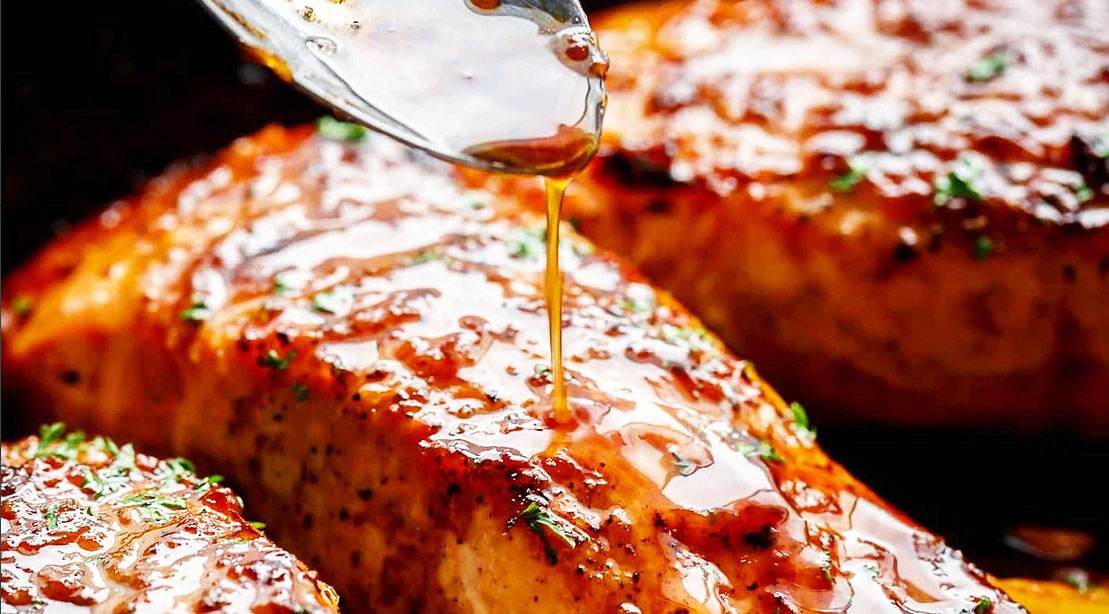 Christian Green first caught our culinary attention in 2014 on Season 5 of Fox’s “MasterChef.” Incredibly, the 29-year-old from New Orleans impressed judges so much during the series that on his exit, Gordon Ramsay offered to invest in Green’s future plans for a food truck.

Fast-forward to 2022 and the charismatic cook is back in the MasterChef kitchen, this time as a contestant in the “Back to Win” competition in which former entrants are pitted against each other for another shot at victory. M&F sat down with Green, who also works with athletes like the NFL’s Marcus Davenport and the NBA’s Zion Williamson to find out how he tailors meals for different athletes and how he monitors his macros. He even gave us the goods to make his Cajun honey garlic salmon dish.

“To be honest with you, being called back has tremendously heightened my confidence,” says Green, who first fell in love with cooking through observing his late grandmother whipping up a storm. “My grandmother used to work in a high school where she was one of the head cafeteria ladies,” recalls Green. “Just seeing my grandmother cook, and you know me getting in the kitchen with her, is where I gained some of my inspiration. I would also go out in the garden and pick collard greens, sweet potatoes, okra, and even pears because we used to make preserves as well; from the pear tree.”

Green attended Dillard University in New Orleans where he studied sociology and psychology and then moved on to a business major, but his true calling came when he jumped at the chance of entering MasterChef. He became a favorite on the show. Along the way, a mutual friend made the connection between Green and Davenport, the defensive end for the New Orleans Saints. He’s also a trusted chef of Williamson the New Orleans Pelicans’ star.

Fueling athletes is something that Green takes great pride in, but how does he go about planning different meals for various types of athletes? “It’s different for each individual and sport,” he says. “The reason it’s so different is because you have one athlete that plays 17 games a year, maybe more, depending on if they make it to the playoffs, and then on the other hand you have an athlete that plays 80 something games a year. In addition, the sports are also entirely different, so their diets must be different as well. One thing that I always consider when cooking is making sure that I cook meals that allow the athletes to stay healthy, while also keeping them at the right weight. My top priority is making sure that I am putting the right nutrition and foods into their body. Getting the proper amount of carbs is essential. Another thing that I incorporate a lot is juicing, which I would say plays a huge part in my plans. Marcus Davenport, for example, is not too much of a vegetable person, so juicing allows me the opportunity to implement the vitamins and nutrients that are needed in a creative and tasty way.”

Green says that finding the foods that athletes love, but are also healthy, is a great way to keep them on track. “Zion loves seafood, which is good for his diet,” says Green. “In particular, he loves salmon. Therefore, I try to stay closer to the seafood.” The chef says that he is conscious of the types of carbs that he gives to athletes too. “I try to put good clean carbs into the diet such a quinoa, sweet baked potatoes, lentils, and I also cook with vegan butter. I don’t use heavy cream.” For monitoring his macros, Green uses an app called Lose It! “Whenever I am planning meals, I log all of the components of the meal into the app,” he shares.

And when it comes to adding flavor, Green knows his stuff. “I have my own line of seasonings that can be found on my website, Fashion Food Taste,” he says. “Currently, I have a low sodium Cajun all-purpose seasoning, a lavender garlic herb seasoning, and a zesty lemon peel seasoning.” When his current commitments with MasterChef are complete, he hopes to present further “Dining with Christian” experiences for the public to enjoy, and is very much driven in everything that he cooks by the thought of creating a legacy that his son can be proud of. “Honestly, it feels great to work with athletes to help them reach their goals,” says Green. “I mean, I kind of see myself in them because I used to be an athlete myself. I played football and ran track and even though I didn’t make it professionally on that level, it feels good that I’m able to provide a service to keeps these athletes where they need to be and to also be a part of the catalyst that allows them to continuously hit their goals.”

Koskinen gives Oilers the goaltending they need in big win