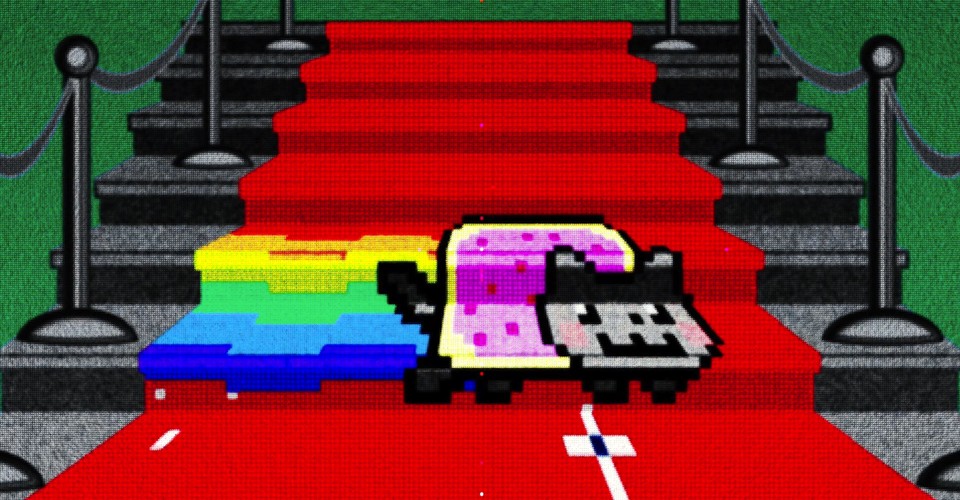 In football, when a quarterback “breaks contain,” he evades the oncoming pass rush, escaping into the open field. To break contain is to generate chaos; it can extend the life of an otherwise dead play, forcing the defense to scramble. It’s a concept I also find useful in thinking about trends: Almost all big trends are conceived in a subculture—gamers, rap fans, teen TikTokers, whoever—but most of the things that get popular within those groups never make it through the barrier to the outside world. But when a trend does manage to break contain, it becomes everyone’s problem.

As I watched the now-viral Tonight Show clip of Paris Hilton and Jimmy Fallon uninterestedly cooing about their newly acquired Bored Ape Yacht Club NFTs, it occurred to me that I had probably just watched NFTs break contain. “It reminded me of me a little bit, because I wear striped shirts,” Fallon said, meekly justifying the computer-generated doodle of an anthropomorphized monkey for which he paid about $216,000. “They look like they could be friends,” Hilton replied, as Fallon held their two monkey cartoons next to each other. Of course this is how it happens, I thought to myself. NFTs have been an obsession in some of the more tiresome corners of the internet for the past year, and an extended conversation between two massively famous people on national television is exactly how that kind of thing leaps into the larger culture. It’s the reason a retired relative texts you to ask if they need to know about NFTs.

Celebrity endorsements—of a product, a brand, an idea, a haircut—have been around for ages, but they’ve become especially thick on the ground in recent years, as stars have developed their own direct-advertising channels on social media. For people with something to sell, a celebrity’s fan base provides an easy, responsive audience. You don’t even have to be all that famous: If you look up the Instagram profiles of cast members from C-list Netflix reality shows, you can reliably find them modeling Fashion Nova leggings or promoting some new app to their seven-figure followings. For products with regulatory red tape that makes advertising difficult, such as recreational cannabis, celebrities are the best way to get people talking about your product.

Hilton and Fallon have abundant company on the Hollywood NFT hype train—Reese Witherspoon, Gwyneth Paltrow, Steph Curry, and Eminem have all hopped on recently. But even in a culture inured to celebrity shills, the Tonight Show clip produced an outsize response. A tweet of the video with thousands of shares called it “deeply strange.” The journalist Max Read described it as “profoundly unsettling.” There is indeed something disquieting about the whole scene—or maybe, that the scene took place at all. With NFTs, America may have reached the logical extreme of celebrity endorsements.

If no one has cornered you at a party to explain this to you yet, NFT stands for non-fungible token, which is an unalterable digital receipt that lives on a decentralized public transaction ledger called a blockchain. In current practice, NFTs are tokens that usually correspond to what can be generously called artworks. The Bored Apes are, if nothing else, a pretty good indicator of the quality of aesthetic vision that you can expect to find at the top of the market. And the top of the market can be very expensive; the artist Beeple sold an NFT in March for $69 million. As my colleague Kaitlyn Tiffany recently wrote, NFTs have also inspired a virulent backlash from people who worry about the environmental impacts of blockchain technology—buying NFTs requires cryptocurrency, and crypto requires an enormous amount of energy—but also from those who think they’re straightforwardly a scam. They very well might be entirely a scam, or the market may just be composed overwhelmingly of scams with some legitimate transactions here and there—feel free to split that hair however you’d like. Whether the technology itself will have more useful applications in the future is presently unclear. This is all speculative for now, in several senses of the word.

The murkiness around the point of NFTs makes Hilton and Fallon’s flippant conversation about their six-figure apes worthy of close examination, even if it wasn’t an endorsement in the narrowly traditional sense. A representative for MoonPay, the cryptocurrency-payments company that they name-dropped for facilitating their purchases, told me that the company’s celebrity clients all initiated the transactions themselves, were invoiced for their own NFTs, and were not compensated for public mentions of the company. The only placement MoonPay has paid for so far, according to the spokesperson, was for a recent plug in a Post Malone music video.

But because NFTs aren’t consumer products, the traditional understanding of a celebrity endorsement isn’t an adequate framework for understanding who’s profiting. As Read noted in his newsletter about the Tonight Show video, the Hollywood-NFT ecosystem seems particularly incestuous. Hilton, for her part, is already an investor in at least one NFT platform, and has sold her own Planet Paris NFTs for more than $1 million. There has been a gold rush into cryptocurrency start-ups in the past year, and because they’re private companies, it’s usually not clear who may have invested where, or who may be doing whom a favor. CoinDesk, a publication that covers the cryptocurrency industry, called the recent flutter of celebrity NFT activity and its questionable motivations “perverse deal-making.” MoonPay declined to comment on its investors.

Even if an NFT-owning celebrity has no financial stake in any of the companies battling it out in the crypto market, they have a clear stake in NFTs as a concept. When you buy one of these tokens, you aren’t buying ownership of the original artwork—the images are publicly viewable (and right-click downloadable) by anyone on the internet, and the original artists retain their rights to publish or reproduce the work itself. What NFT owners get is a new type of speculative asset, and for growth, they need the investment dollars of the general public to flood in after them. “Just as the pork-futures commodity trader is not principally interested in taking delivery of pig meat, so the NFT trader is not necessarily concerned with the usefulness or even the symbolic value of an ape,” my colleague Ian Bogost wrote recently. When Paris Hilton and Jimmy Fallon make dead-eyed conversation with each other on national television about how cool Bored Apes are, it comes with the very real likelihood that doing so will increase the value of their investment by recruiting new money. When NFTs break contain, NFT holders profit.

You know what? Fine. Fine. I don’t know that I care if some guy loses his shirt because he thought Post Malone or whoever else had provided him with a sound blueprint for securing his financial future via some type of computer-generated monkey doodle that’s particularly likely to get stolen. Someone should be out there protecting that guy from himself, but that’s above my pay grade.

Regardless, it’s gross. Watching two millionaires promote a mechanism of passive wealth accumulation while they unconvincingly pretend to be interested in “art” or “community” is viscerally revolting. Even Hilton and Fallon seem to be exhausted by going through the motions of revenue-creation in this particularly vacuous way. The Simple Life, the reality show that made Hilton a household name, may not have been incredible art (although I did truly enjoy it as a college student), but at least it was fun to watch. Perhaps the genre of celebrity that Hilton helped produce in the mid-2000s always guaranteed that wealth accumulation itself would be the endgame of celebrity endorsements. Hilton, like her Kardashian heirs and countless Instagram influencers after them, has never been all that interesting on her merits. Instead, watching people be rich is luridly entertaining, and what’s most fascinating about this kind of star is the way that they use fame as a portal through which endless stacks of cash can be pulled. Over time, the most successful among them have become more like traditional celebrities—the Jimmy Fallons of the world—but their enormous cultural influence has also forced other kinds of stars to behave more like them.

Read: People really, really hate the future of the internet

Stars have always done asset-based wealth building, just like any other rich person, but quietly—celebrities who buy up rental properties or fast-food franchises generally have not sought public praise for becoming landlords, or for extracting wealth from the labor of the working poor. Now everyone from Justin Bieber to Shaq wants to be treated as a cultural visionary for placing six-digit bets on the long-term value of a digital receipt for an ugly cartoon, and they want you to know this is the new cool thing, and there’s still time for you to get in on the ground floor. If Hilton and Fallon and their celebrity friends are going to go out there and pump-and-dump their way to additional wealth, they could at least do the rest of us the courtesy of being a little more discreet about it. Instead, they sound like they think this is stupid, and like they think the rest of us might be stupid enough to buy in.

Why You Should Travel Less and See More – Bearfoot Theory

A Look Inside the ADHD Brain