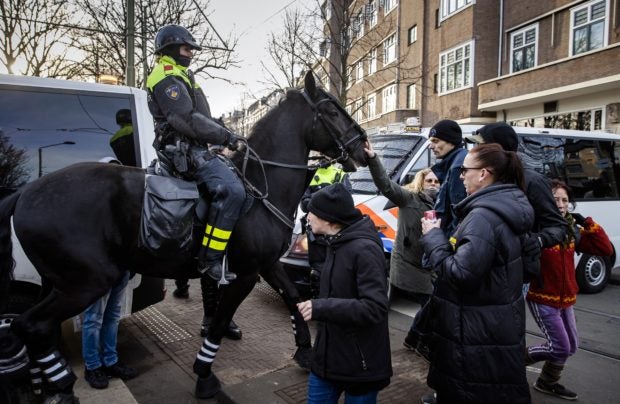 The police disperses protesters gathering against the corona measures at the Binnenhof in The Hague, the Netherlands on February 12, 2022. AFP

THE HAGUE — A convoy of vehicles from across the Netherlands brought The Hague’s city center to a brief standstill on Saturday, protesting coronavirus restrictions.

Inspired by Canadian truckers who congested the capital Ottawa, several hundred vehicles during the day blocked access to the Binnehof, seat of the Dutch government, according to a report by public television.

After police warned protesters they would be fined and arrested if they did not leave by mid-afternoon, the drivers withdrew.

“The protesters who were blocking the city centre with trucks… have now left,” police posted on Twitter in the evening.

The protesters had started to arrive in the early morning in trucks, cars, tractors and even caravans.

At first they refused to leave, organizers said, until “fundamental and long-lasting change” was enacted and all Covid restrictions were lifted nationwide.

“The protest… is quietly ending,” organizers posted on Telegram later in the afternoon. “Tomorrow is another day.”

Dutch press agency ANP said most left the area calmly, but minor skirmishes broke out after the trucks drove away.

“Horseback police dispersed a group of people and dealt blows…,” it reported. “At least two people were arrested.”

“There too, people are very unhappy with public policy,” he said.

Several other protesters earlier said they would drive on to the Belgian capital Brussels, or even to Paris, where French police issued fines and fired tear gas Saturday to disperse similar protests.

Some said they would be back in The Hague on Sunday.

The Canada-style convoy is just the latest demonstration against the government’s anti-Covid restrictions in the Netherlands.

Anger spilled over into violence in January last year and again in November when riots erupted in cities including The Hague and Rotterdam.


For more news about the novel coronavirus click here.

What you need to know about Coronavirus.

The Inquirer Foundation supports our healthcare frontliners and is still accepting cash donations to be deposited at Banco de Oro (BDO) current account #007960018860 or donate through PayMaya using this link .

Don’t Starve Yourself: The effects of dieting