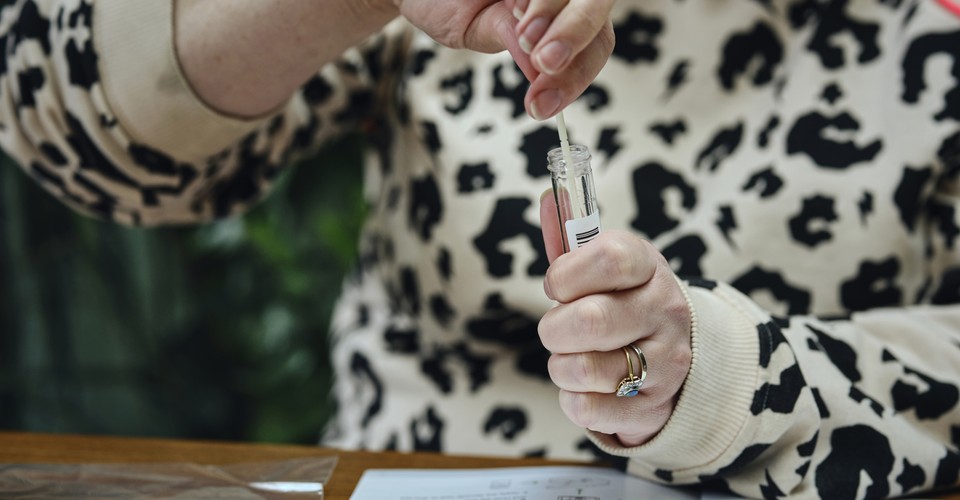 For the past two years, Marie, a 30-something student in New York, had the right idea about COVID-19: She didn’t want to get it. Then, in the middle of December, as the antibody-dodging Omicron swept through her state, the coronavirus found her all the same. But Marie’s three vaccines helped keep her illness short and manageable. By year’s end, she and several of her friends had found themselves in a roughly similar spot, doing some of the same pandemic math: vaccine + vaccine + vaccine + infection = … surely a reasonable amount of safety, right?

So they threw a New Year’s party. At the close of December, 10 of them, all recently recovered from COVID and out of isolation, headed upstate for a maskless two-day bash. They were celebrating the start of 2022, but also the start of some kind of post-infection reprieve—a taste of normalcy, a chance to kick back and mingle. “We figured none of us can spread it, because we’re all over it,” Marie, whom I’m identifying by only her first name to protect her and her friends’ privacy, told me. (That was four days ago; Marie’s since flown down to Texas, and is still feeling fine.) Maybe they even had a wee bit of extra immunity—almost as if the virus had gifted them a crude bonus boost.

This sense of deliverance has some scientific logic to it: Additional exposures to bits of a virus do tend to build immunity incrementally. So it’s not irrational to imagine that an infection will leave one’s antiviral armor just a shade thicker. That’s why Ali Ellebedy, a thrice-vaccinated immunologist at Washington University in St. Louis, whose vaccinated family of five got sick around Christmas, is “less worried about attending my next conference,” scheduled for later this month (if, you know, Omicron doesn’t cancel it). For him, Marie, and many, many other vaccinated folks like them, this latest wave has created a kind of post-COVID honeymoon phase.

Like any honeymoon, though, this one is necessarily transient. (And, to be clear, infections are still never something to be sought out.) No combinations of vaccines or viruses can confer invulnerability to future tussles with SARS-CoV-2. Whether acquired from an injection or an infection, immunity will always work in degrees, not absolutes.

Immunity is, in many ways, a game of repetition. The more frequently, and more intensely, immune cells are exposed to a threat, the more resolutely they’ll commit to fighting it, and the longer they’ll store away any microbial information they glean. Time and viral mutations pare down those protections; vaccines and sickness build them back up. That’s part of why we almost always dose people with vaccines multiple times.

In the same vein, a single SARS-CoV-2 infection isn’t enough to keep someone safe long-term. But layered on top of vaccination, an infection can coax out “almost what you would call a boosted response,” Ai-ris Yonekura Collier, a physician and vaccine researcher at Beth Israel Deaconess Medical Center, in Boston, told me. Immunized bodies will reawaken veteran immune cells: Bs to spill out fresh virus-quashing antibodies and killer Ts to detonate infected cells. It’s a version of what some immunologists, including Shane Crotty of the La Jolla Institute for Immunology, in California, have been calling “hybrid immunity”—the one-two punch of infection and vaccination, one of the most comprehensive educations on the coronavirus that a person can reasonably get. The phenomenon’s been best studied in people who encountered the pathogen before being vaccinated, but now scientists are amassing data on how it works in reverse. The payoffs can be big: The quantity and quality of the body’s defenses are expected to rise, even against new variants; the rate of reinfections should go down.

This, then, could count as a sort of consolation prize for the many vaccinated people who have recently been hit by a version of the virus. Post-vaccination infections might, in theory, influence immunity in ways our vaccines can’t. While nearly all of the world’s COVID vaccines center on SARS-CoV-2’s spike protein, fighting the actual virus gives the body more information about its anatomy. Bona fide microbes can also draw airway-specific defenses to the nose and mouth, the virus’s natural point of entry—something in-the-arm injections aren’t great at doing. “If those are maintained, that’s what’s going to offer a lot of protection against subsequent infections,” Jennifer Gommerman, an immunologist at the University of Toronto, told me. (Gommerman also thinks that vaccines spritzed up the nose might be a good move in the future.) And since our current vaccines are still based on an old, ancestral version of SARS-CoV-2, a post-vax collision with the highly mutated Omicron offers intel that’s more up-to-date. By rousing immune cells that haven’t responded to previous variants, an Omicron infection could effectively “broaden your immune response,” Rishi Goel, an immunologist at the University of Pennsylvania, told me.

The problem, though, is that none of this is assured, especially when factoring in the thorny variable of time. Viruses that linger too long in the body could exact a punishing cost—transmission, disease, death. But if they’re cleared out too fast, they might not have enough time to teach the body something new. And those dynamics depend partly on when someone got their last immunological boost. Someone who’s very recently received a vaccine, for instance, might still be flush with antibodies that could swiftly sweep out the virus. Ellebedy, who was exposed to his COVID-sickened wife about a month after boosting and had pretty minor symptoms, thinks that’s what happened to him, which is great from a disease-severity standpoint, and potentially a transmission one. But a truncated infection might also cut short the immune system’s review session on the virus itself. Bodies will sometimes try to calibrate their defense to match the opponent’s offense, and trifling infections aren’t always worth a massive reinvestment in protection. A later encounter with the virus might spur cells to react more dramatically and squirrel away another slew of safeguards—but at the risk of a longer, more dangerous, and more contagious infection.

A bevy of other factors, too, can influence the magnitude of protection that’s tickled out by a breakthrough: age and health status; vaccine brand, dosing, and timing; the genetic makeup of the variant. (Most people have no way of knowing for certain whether they caught Delta, Omicron, or another SARS-CoV-2 flavor.) And while each dose of a particular vaccine offers essentially identical amounts of immunity-titillating stuff, actual infections don’t serve up the same dose to every person they hit. “The amount of heterogeneity in people’s immune responses is just incredible,” Taia Wang, an immunologist at Stanford, told me. Some recently infected people might experience only a modest bump in protection—which might not be enough to meaningfully stave off another infection in the not-so-distant future.

Read: America is not ready for Omicron

Even in the most optimistic scenario, in which a post-vaccination infection does really turbocharge a vaccinated person’s immune responses, the durability of the most primo effects is still a wild card. Alex Sigal, a virologist at the Africa Health Research Institute, in South Africa, told me that he suspects the post-breakthrough luster may dissipate within weeks, as antibody levels naturally fall. There’s also no telling how well Omicron-specific protection—should it show up, and persist—would shield us against the next variant, or the next. Vaccine + vaccine + vaccine + infection never does make terribly satisfying arithmetic. That last component is always essentially an unknown quantity, with an unknown shelf life, and no equation we’ve come up with—no combo of primary vaccines, booster shots, and variants—adds up to being done with COVID forever.

We also have another, larger equation to contend with. Everyone’s personal COVID calculus is part of a global sum that, right now, is spitting out record-high cases and, in some places, record-high hospitalizations. Even with vaccination, no infection is guaranteed to be “mild”; some people will always be hit harder than others. Omicron might be less likely than Delta to land people in the hospital, but they can’t select which version of the virus they’ll get, or whom they’ll spread it to. Gommerman also worries about the burden of post-Omicron long COVID, a concern that researchers don’t yet have a good handle on. Ultimately, this virus will likely infect nearly all of us. That doesn’t mean it has to infect nearly all of us right now. A honeymoon’s not much of a honeymoon if we’re all trying to crowd into the same space together.

The Importance of Your Yearly Gynecological Exam

Paulo and Janine share love lessons from ‘Marry Me, Marry You’

How effective are COVID-19 vaccines against the Omicron and Delta variants?

How Are Your Health Goals Going??? Join the Next Wheat Belly 10 Day Grain...