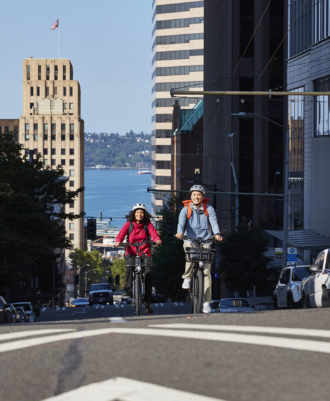 This promo photo from Rad Power Bikes shows off how e-bikes can easily climb up even steep downtown Seattle east-west streets.

For as much attention as this country gives to electric cars, e-bike sales continue to grow at a remarkable pace. And with gas prices through the roof, sales of e-bikes will not likely slow down any time soon.

E-bikes are especially useful in the United States, where people often need to travel fairly long distances that are poorly served by transit. And in Seattle, well, it’s pretty obvious why e-bikes are selling so well here.

Gregg’s Cycle, one of the largest bike retailers in the Seattle area, just had its best February since it opened in 1932. “It was across the board, but e-bikes were a big percentage of that,” says longtime general manager Marty Pluth. “I think that was a result of the fuel hikes.”

Seattle e-bike startup Rad Power Bikes surveys its customers at checkout about their reasons for buying. An increasing number, according to co-founder and chief executive officer Mike Radenbaugh, cite rising fuel costs. “Just as the desire for safe and socially distanced transportation created another category of consumers for e-bikes, higher fuel prices do the same thing,” says Radenbaugh. “It layers growth on top of already fast growth.”

At this point, the e-bike is just a normal bicycle option. They typically come with a price premium over pedal-only bikes, but that price can be justified if the motor helps users bike more trips. Vitally, e-bike maintenance is becoming more widely available. In the not-so-distant past, e-bikes were often short-run products by small companies that may not be capable of supporting the custom motor and electrical components. Now people have options that are serviceable by local shops, which makes e-biking far more reliable, at least in places like Seattle with so many great local bike shops. This is why my advice is, whenever possible, to buy your bike from a local shop that is prepared to service it.

But note to all the new e-bike owners: Be sure to get a really good lock.

Lose Weight On A Plant-Based Diet