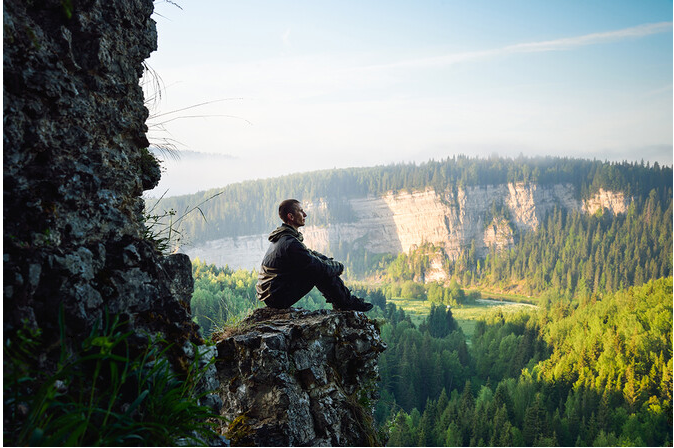 As I mentioned in a previous post, I have had some experiences while exercising and meditating that could be described as “transcendental”. I have spontaneously felt like the boundaries between my little separate self and the world dissolve, and I was one with all there is. This is also accompanied by feelings of love towards my fellow beings, and is very peaceful and joyful. And it feels like coming home to my true self. Similar experiences have been reported by contemplatives from all the world’s spiritual traditions, and in “runner’s high” type experiences from athletes and explorers [1]. I was surprised to learn in this interesting review that “Some studies have shown that about a third of the U.S. population agrees that they’ve had an experience where they felt at one with all things”. This raises the question of the meaning of such experiences, and has made me interested in reading up on the science of consciousness as well as aspects of psychology and philosophy that might be relevant. In this “amateur philosopher’s corner” section of the blog, I’ll discuss interesting findings.

There are two explanations at opposite ends of the spectrum of belief that explain the type of experience I’ve described. The first is in line with the philosophy of materialism. This is essentially that matter is the fundamental reality, and that there are natural explanations for all phenomena, including consciousness. According to findings from neuroscience, keeping track of the physical boundaries of the body is one of the functions of the parietal lobes of the brain [2], and if the activity of these decreases, during, say, meditation or endurance exercise, this boundary could appear to soften or even disappear, explaining the feeling of oneness. Perhaps in this relaxing state spontaneous feelings of peace, love, and joy would also arise. In any case, such experiences would be just brain phenomena.

At the other end of the spectrum are philosophies that believe some sort of universal consciousness exists underlying the material world, which various religions refer to by names like God, the Great Spirit, or Cosmic Consciousness. According to the perennial philosophy, contemplatives from all the major religions have had an insight into such a reality, and it is the common core of all these belief systems, which is much more similar than their surface differences. So we may start to perceive this consciousness when the mind is particularly quiet, and this consciousness is benevolent, which explains the feelings of peace, love, and joy. A good example of this explanation is this poem by the 17th-century mystic Angelus Silecius:

Materialism and the perennial philosophy are not the only two belief systems in the world, obviously, but they are two main ones that give explanations for the experience I described above. Most scientists, especially neuroscientists, would probably go with the former (“materialist”) explanation. But from what I’ve read so far, science is unable to prove which of the two options is valid at this point, and there are a significant number of scientists starting to lean towards an explanation that some sort of universal consciousness exists. I must admit that I’d I would prefer it if the second explanation turned out to be true. But if science were to prove the materialist argument, and that therefore there is a rather prosaic explanation for these “peak experiences”, I would have to accept it. This preference may make me less objective than I should be in my inquiries, but I still try to be open-minded. I’ll discuss some things I’ve read in this fascinating area in my next “philosopher’s Corner” post.

I am a Mechanical Engineer born in 1953, Ph. D, Stanford, 1980. I have been active in the mechanical CAE field for decades. I also have a lifelong interest in outdoor activities and fitness. I have had both hips replaced and a heart valve replacement due to a genetic condition. This blog chronicles my adventures in staying active despite these bumps in the road.
View all posts by BionicOldGuy

Resistance to a Boston hospital’s expansion centers on rising prices