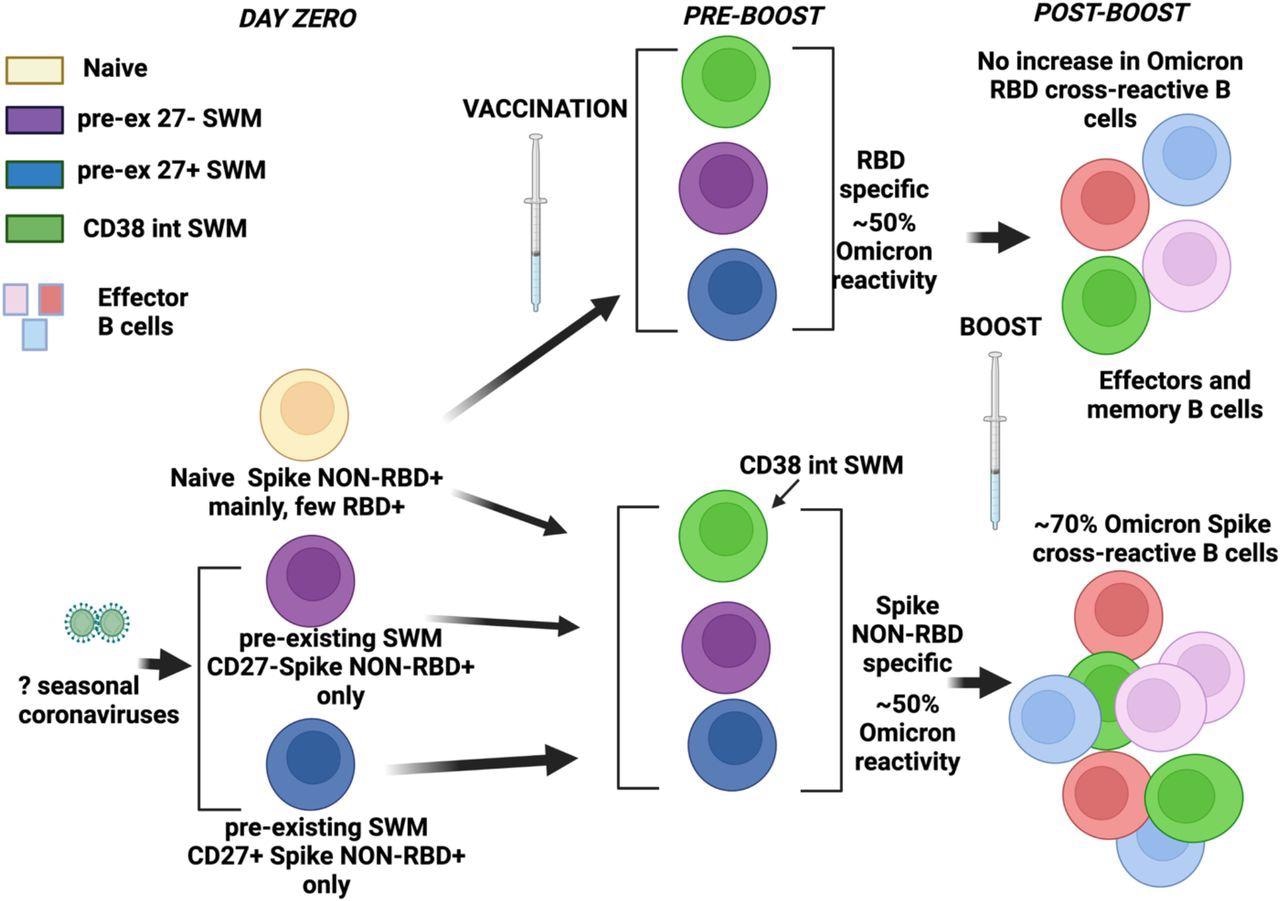 Memory B cells never forget recurrent viral exposures and severe acute respiratory syndrome coronavirus 2 (SARS-CoV-2) is no exception, according to a new medRxiv* preprint study. Vaccination and prior infection appear to activate long-lived memory B cells and mold them to become receptor-binding domain (RBD)-specific B cells. When given a third vaccine dose, pre-existing memory B cells became cross-reactive and successfully bound Omicron’s spike protein.

During the study, researchers from various institutions across the U.S. and South Africa examined fresh blood samples from a small group of unvaccinated and uninfected subjects prior to vaccination and 1-2 weeks following vaccination with an mRNA vaccine (BNT162b2 or mRNA-1273, respectively) (Post Vax).

Two spike-specific tetramer probes were generated to identify and categorize memory and effector B cell subsets after vaccination. There were 12 identified clusters, but clusters 7 and 9 were classified as being CD27 high or low, making 14 clusters in total.

Effector B cell subsets and switched memory B cell subsets could be found through their expression of specific surface proteins such as CD21, CXCR5, CD11c, and CD85j. 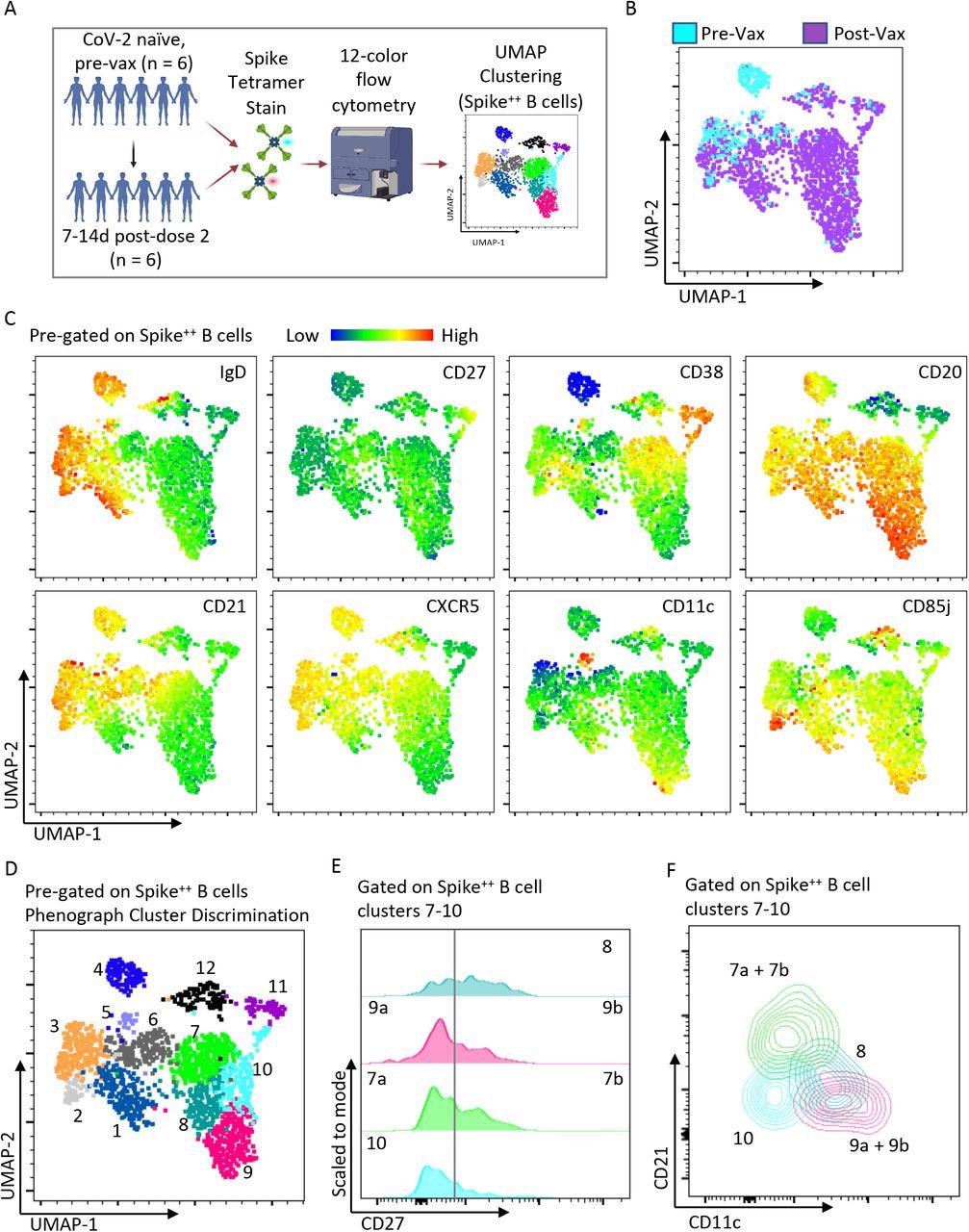 Memory B cell expansion after vaccination and COVID-19 infection

IgDCD85j+CD27+ B cells were not found in plasma samples of uninfected individuals and not vaccinated. However, the researchers note that these cells do not last for more than six months after vaccination, suggesting they are more effector B cells than memory B cells.

Another group of B cells, IgD- CD27+ CD85j- CD38int, expanded the most after vaccination and infection.

Uninfected and unvaccinated individuals showed high levels of pre-existing spike binding B cells that target SARS-CoV-2. However, exposure to only other seasonal coronaviruses makes it harder to recognize the spike proteins of other coronaviruses such as SARS-CoV-2.

A large number of spike-binding B cells are found in the IgD+CD27- “naive” gate as well as the unswitched memory population, “switched memory” B cell gate, and the IgDCD27- switched CD27- B cell population.

The majority of spike-binding B cells targeting SARS-CoV-2 and the Omicron variant are comprised of naive follicular B cells. Unvaccinated and uninfected individuals lack RBD-binding B cells.

Compared to receptor-binding B cells targeting the wild-type SARS-CoV-2, the pre-existing CD27-resting switched memory B cell compartment is one of the most dominant and long-lasting antigen-specific memory B cell populations in vaccinated individuals six months after vaccination but before a booster shot.

Cross-reactivity of B cell memory populations against Omicron

Given the rise of Omicron-related COVID-19 cases, the researchers investigated how booster shots affect memory B cell’s actions against the new variant of concern.

Boosting did not increase the frequency of RBD-binding B cells that recognize Omicron’s RBD. However, it did induce differentiation and expansion of pre-existing switched memory B cells such as CD27+ and CD27- which held bind Omicron’s RBD. Additionally, a booster increased the frequency of wild-type spike-binding B cells that expand to target and bind Omicron.

medRxiv publishes preliminary scientific reports that are not peer-reviewed and, therefore, should not be regarded as conclusive, guide clinical practice/health-related behavior, or treated as established information.

Smoking and Running ► The Key to Quitting

6 Ways To Deal With Your Child’s Learning Disability

6 NFL teams with the most hopeless futures

How I Became a Cisco Expat